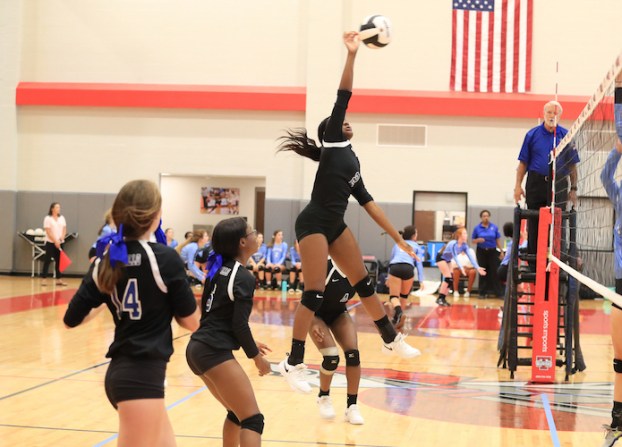 The Montevallo Bulldogs dropped a five-set thriller to the Leeds Greenwave in a battle for a spot atop the area standings. (For the Reporter/Dawn Harrison)

MONTEVALLO – The Montevallo Bulldogs had been on a roll as of late winning seven of their previous eight matches, including five in a row, which put them in a tie with Leeds atop the area standings heading into a matchup with the Greenwave on Tuesday, Sept. 24.

Montevallo got off to a 5-8 start on the season, but with that recent winning streak, the Bulldogs had improved to 12-9 overall and gained a ton of confidence, which became key against a Leeds team that entered the matchup 16-3 overall and winners of six in a row and 16 of its last 17 matches.

With the recent success for each and a spot atop the area standings on the line, a compelling match ensued that saw each team trade sets through the first four sets leading to a tiebreaker.

Early in the match, the Bulldogs weren’t intimidated by the ranked Greenwave as they came out firing on all cylinders. Montevallo didn’t just win the opening set, but pulled away late for an emphatic 25-19 set victory to make a statement early in the match with a 1-0 advantage.

Leeds, however, had a big answer in the second set and turned the tables quickly. Despite the opening-set loss, Leeds regained the formula that had made it so successful over the last few weeks and pulled away for a 25-19 set victory of its own to even the match score.

But in a match that saw neither team able to sustain momentum through the first four sets, the Bulldogs were able to bounce back in the third set.

Looking to avoid falling into a 2-1 deficit, Montevallo came out in the set with a purpose and got back to the success of the first set, which led to a 25-18 victory and a 2-1 lead.

Now just one set away from pulling off the upset, the Bulldogs put together another strong fourth set and seemed to be on the path of picking up the win, but the Greenwave again showed their resiliency and put together a run.

They were able to put together a crucial run that ended with a 25-23 set victory to even the match at 2-2 and force a decisive fifth set.

With that shift in momentum, Leeds gained the confidence needed heading to the tiebreak set and used that to its advantage, while Montevallo was unable to overcome the fourth-set loss.

The final set was close early, but Leeds eventually held serve by putting together a strong run, which led to a 15-8 victory to close out the match for the 3-2 win.

Montevallo is now 12-10 overall and 3-1 in area play with one more matchup against each area opponent.

By ALEC ETHEREDGE | Sports Editor  HOOVER – For the second time this season the Spain Park Jaguars and Thompson... read more