The Working Wildcats are some of Shelby County High School’s most celebrated students. Under the instruction and mentoring of their teacher, Marisol Lilly, this self-contained class of students with special needs is designed to ensure the students become productive members of society in the workforce.

On Oct. 1, they invite their community to see one of their latest achievements: The Working Wildcats Clothing Closet.

The idea began when Lilly began preparing her students for their first special needs prom in 2013. 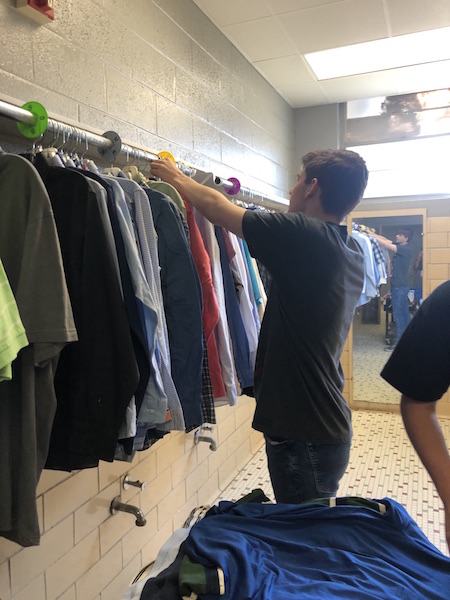 Working Wildcats work hard in their newly renovated Clothing Closet to organize, merchandise and provide for the community in need around them. (Contributed)

The Working Wildcats gathered formal wear for friends that otherwise would not have had something special to wear for their big night.

This grew as the years went on to include clothing that could be available for kids that came to school out of dress code, giving them an opportunity to find something appropriate and within the rules of the school while staying on campus so they wouldn’t have to leave and lose valuable instruction time.

Nowadays, the clothing closet also offers items that can help students prepare for graduation, job interviews and other professional opportunities.

The Wildcat Clothing Closet relies on donations from the community and the local thrift store to stay stocked.

It also absorbs the school’s unclaimed lost and found several times a year.

As the project gained momentum, Lilly saw the need to create a space that would not only act as a sort of store environment, but could also be used as a classroom to teach her students the skills that would prepare them to work in a retail environment.

She located a room inside the school that was largely used for storage and made plans to renovate it to meet the need.

With the help of Justin Bailey and Nicholas Baker from the E.C. Gaston Chapter of Alabama Power, her idea became a reality.

Since then, Alabama Power has provided them with a much-needed facelift by renovating what was formerly an out-of-use restroom into a usable space.

They also furnished hardware needed to hang the clothing in a way that would create a comfortable store-like appearance for those in need but also made a working, interactive learning environment for the Working Wildcats.

“The kids have been excited to see the progress over time. Before we had the actual space, we would work hard to organize it only for it to be picked over and stuff to be thrown everywhere,” Lilly said.

The newly renovated space is helping the students get a visual representation of the fruits of their labor, and that’s a payoff that these students have worked hard to achieve.

That brings them to hosting their Open House on Oct. 1.

Working Wildcats want the community to come to their ribbon cutting at 9:30 a.m. and take a tour during Parent Day from 10 a.m. to 2 p.m. that day.

Everyone is invited to visit the clothing closet and see the results of these students’ efforts.