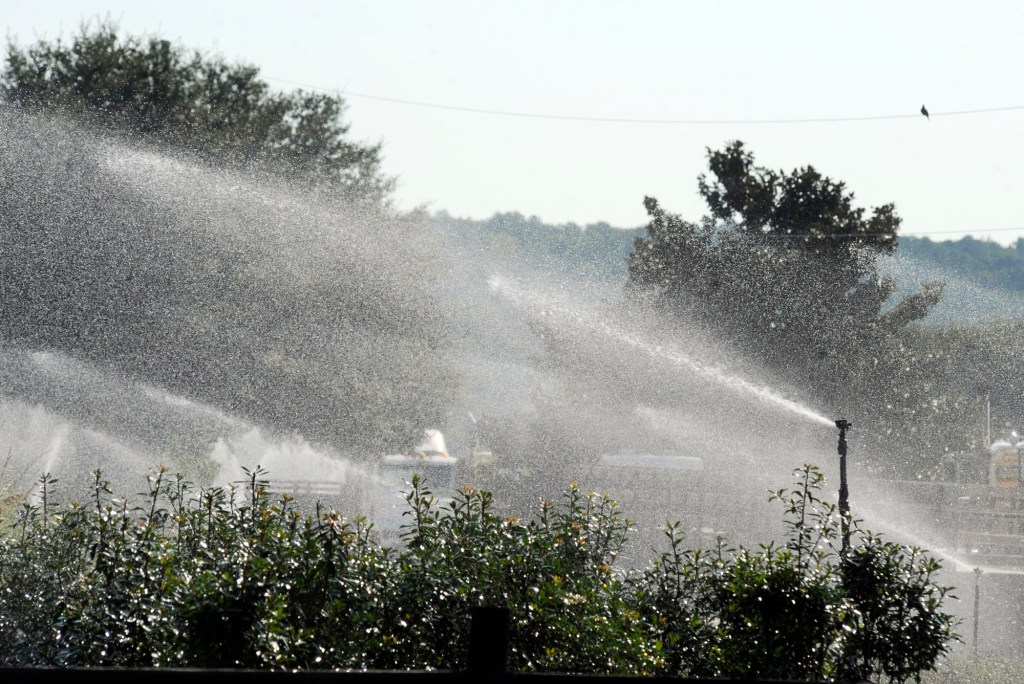 Sprinklers spray water on plants at Green Valley Farms, a commercial nursery in Montevallo, Ala., on Thursday, Sept. 26, 2019. Weeks of dry, hot weather across the Deep South have worsened a drought that a federal assessment says is affecting more than 11 million people across five states. (AP Photo/Jay Reeves)

BIRMINGHAM — Weeks of dry, hot weather have plunged the Deep South further into a drought that’s affecting more than 11 million people and threatening crops across the region, a new assessment showed Thursday.

The latest report from U.S. Drought Monitor showed arid conditions worsening across a five-state area from Louisiana to South Carolina.

Conditions are particularly bad in Alabama and Georgia, where nearly the entire state is too dry. Areas around the suburbs of Birmingham and Atlanta are particularly hard hit. The National Weather Service on Thursday reported record temperatures for several Alabama cities: Montgomery at 100 F, Troy at 98 F, Tuscaloosa at 97 F and Birmingham and Anniston each at 96 F.

Drought conditions extend into northern Florida and the southern Great Lakes region. Much of Texas and the Southwest also are too dry.

Some areas have gone weeks without substantial rain. Farmers say the dry weather is hurting their crops, and Alabama has declared a statewide fire alert because of extremely dry weather.

About 30 miles (48 kilometers) south of Birmingham in Montevallo, sprinklers ran full tilt at a roughly 200-acre (81-hectare) commercial nursery, Green Valley Farms, that is near the most parched area in the South.

A few miles away, April Hebert watched her 1-year-old son Collins toss rocks into a partially dried-up pond at a park in Helena. Brown leaves that are normally still green this time of year covered the ground under trees.

“It’s terrible,” she said of the drought. “I’m afraid we’re going to go straight from summer to winter without a fall.”

The Agriculture Department said pastures, hayfields and soybean crops are drying up because of the drought, and some farmers have been feeding hay to livestock because of a lack of grass. Most crops are still in good or fair condition despite the lack of rain, the agency said.

While lake levels are falling, no mandatory water restrictions are in place.

The National Weather Service said most places in Georgia and Alabama received below-normal rainfall in August, and temperatures for the month were as much as 3 degrees above average in Georgia.