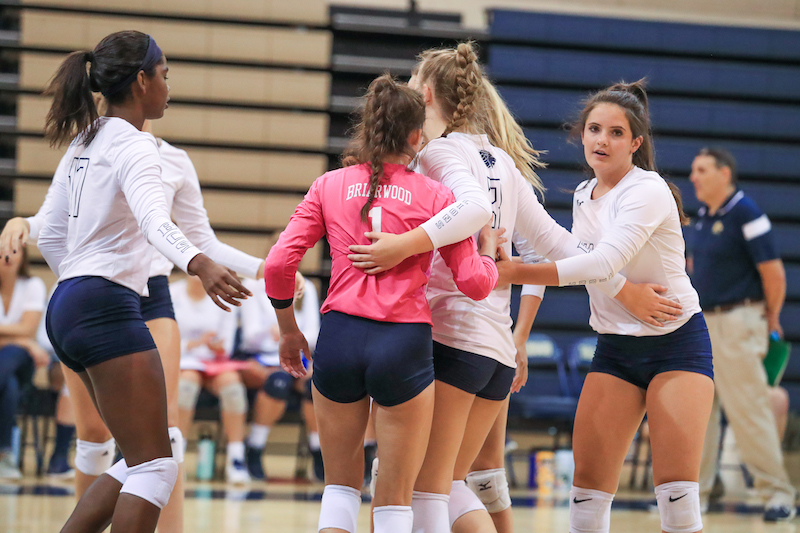 The Briarwood volleyball team won a thrilling 5-set match with Class 7A John Carroll on Thursday, Sept. 26. (For the Reporter/Dawn Harrison)

BIRMINGHAM – The Briarwood volleyball team traveled to John Carroll on Thursday, Sept. 26, and despite giving up a 2-0 lead, the Lions were able to close out a fifth-set tiebreak victory to complete one of their biggest wins of the 2019 season and their third consecutive victory.

Having locked up the regular-season area title just two days earlier with a 3-0 sweep of Woodlawn, Briarwood’s confidence seems to be growing late in the season, and it showed in the first two sets against the Cavaliers.

The Lions came out firing with all the confidence in the world in the first two sets, and despite the Cavaliers being two classifications higher in Class 7A, Briarwood was able to use their added confidence as of late to pull out a thrilling 25-23 first-set victory on the road.

With that close win, the Lions saw they could beat a good John Carroll team, which led to even more confidence in the second set. While it was close for a while, Briarwood again made the plays late to pull away for a 25-21, which was one of the best efforts of the night from the Lions.

With their backs against the wall, however, the Cavaliers came out in the third set determined to keep the match going and showed why they can be extremely good as well.

John Carroll left no doubt from the start of the set and eventually went on to win the set 25-13 to keep the match alive.

The Cavaliers carried that momentum over into the fourth set still needing to win one more to force a decisive fifth set. They had found a successful formula with that victory in the previous set, and stuck to it in the fourth, which led to another dominant showing with a 25-14 victory to force a tiebreaker.

At that point, despite winning the first two sets, Briarwood was desperate for any sort of motivation. John Carroll had completely turned the momentum in its favor and looked to be dominating.

The Lions, however, dug deep knowing they had to fight for just one more set to pull off one of their biggest wins of the season.

Somehow, they ended up flipping the script in the all-important set and found the level of play they had shown in the first two sets.

That led to Briarwood’s most dominant set victory of the night at 15-10 to complete the 3-2 victory.