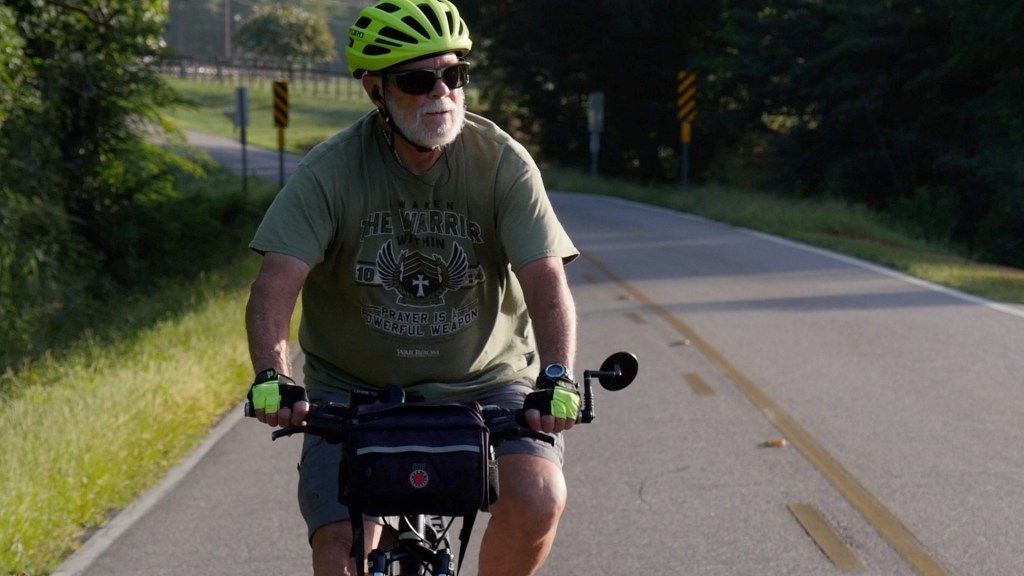 George Dudley is preparing for a bike ride up the Atlantic coastline to raise money for St. Jude Children’s Research Hospital. (Contributed)

George Dudley of Columbiana is making big plans for his 80th year of life.

Not many men his age would plan a four-month cycling trip from Key West, Florida to Calais, Maine to mark the beginning of their eighth decade.

Dudley, however, is not your average octogenarian.
A former pastor, Dudley retired in 2007 and took up hiking as a way to stay active.

He made plans to hike the Appalachian Trail in sections.

Unfortunately, knee problems and eventual knee replacement surgeries made this endeavor a risk even after successful healing.

It was at that point Dudley found cycling. It was an easy switch when he found he could pedal with no problems.

So, Dudley traded long hikes for long rides in 2014.

Over the next few years, he and a good friend took several 200-mile rides.

Dudley and his wife had been lifelong camping enthusiasts, so Judy would travel along by car, setting up base camps for them to stay at on these longer trips.

The long rides gave him a hunger for a bigger challenge.

While he didn’t feel he wanted to try a coast-to-coast ride, he became inspired by several sources to go for an Atlantic coast ride.

“Initially I thought this is a great challenge for me,” Dudley said, “But then I thought that I’d really like it to be some kind of ministry.”

Eventually, the two ideas came together, and he decided that he wanted to use his Atlantic coast bike ride to raise funds for St. Jude Children’s Research Hospital.

“Judy and I had been supporting St. Jude Children’s Research Hospital for a number of years, so I contacted them that I wanted to do a fundraiser for them and they picked up on it,” he said.

The fundraising for St. Jude will begin a little closer to the beginning of his trip, but before he can raise funds for St. Jude, he has to fund the trip itself.

Dudley plans to do his coastal ride from March through June of 2020.

As usual, his wife Judy will set up base camps along the way, and drive him to and from starting points each day.

Dudley estimates the expense of the trip will be around $8,000 dollars in fuel and campground fees.

His family has set up a GoFundMe campaign to raise enough cash to be able to do the trip. Anything that is donated above that amount will go toward his efforts to raise funds for St. Jude.
“We’re vital as long as we’re here,” Dudley said of his adventure and the opportunity to do for others.

Dudley said every day he meets people along the way during his rides around town.

He sees himself doing the same as he works his way up the Atlantic coast next summer, telling them about his faith and the story of how his trip came to be.
To help him raise the initial funds for his trip, go directly to his GoFundMe campaign at Gofundme.com/cycling-for-the-son or donate by sending a check marked “Cycling for the Son” in the memo to Columbiana UMC, P.O. Box 676, Columbiana, AL 35051.