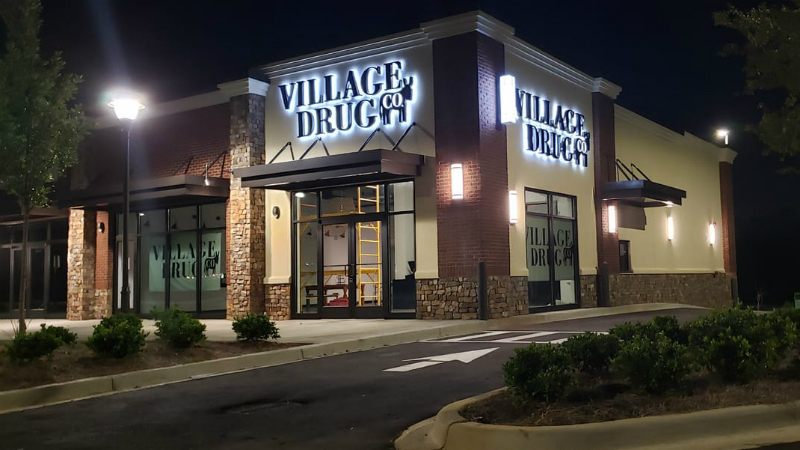 A grand opening for Village Drug Co. in Mt Laurel is scheduled for Oct. 5. (CONTRIBUTED)

MT LAUREL – A husband and wife team are opening a new pharmacy with a focus on serving the Mt Laurel community.

A grand opening for Village Drug Co. will be held Oct. 5, with free ice cream from Bendy’s Cookies and Cream from 1-2 p.m., said Matt Zauchin, who will own and operate the business with his wife, Lauren.

The Zauchins went on their first date as eighth graders, Matt Zauchin said, soon after Lauren moved into Matt’s Hoover neighborhood from Texas, and married about eight years ago.

“That’s really where I got introduced to pharmacy,” Zauchin said.

He returned to Samford for pharmacy school and then worked as a manager for the Pelham Walmart pharmacy for about four years before stepping out to open his own pharmacy.

The couple resides in Hoover but hopes to move closer to the business, Zauchin said.

Mt Laurel has maintained a community feel despite growth, in part because of residents’ support of local businesses, Zauchin said.

“This area, it’s fantastic,” he said.

Zauchin was connected to the property by a former Samford baseball teammate, Bear Burnett with The Canvass Group.

After putting in 10-11 months of painting, decorating, ordering products and putting on finishing touches, the Zauchins are almost ready to open Village Drug Co.

Lauren Zauchin’s focus will be on the retail side of the business, which will offer a range of items, including Jellycat soft toys, Duke Cannon soaps for men and even Village Drug Co.’s own private label line of CBD tea, balm and tinctures manufactured in Birmingham.

As a small, independent pharmacy, Matt Zauchin said Village Drug Co. can’t rely on quantity of sales, so the focus is more on meeting needs.

“Our goal with this place is to serve this community,” Zauchin said.

That will be accomplished in every possible way, from the design and layout of the store to the items available for purchase to customer service.

By design, the pharmacist will feel accessible instead of isolated so that customers are not reluctant to ask questions about their prescriptions.

A patient care room will eventually allow Village Drug to host collaborative practices. For example, a customer with flu-like symptoms could come in, be tested and have medication in hand in about 30 minutes.

Zauchin would also like to add a delivery service at some point in the future, but in the meantime, customers can take advantage of the convenience offered by a drive-through window—the only one of its kind at any business in Mt Laurel.

“When you have a sick kid, the last thing you want to do is drag them in somewhere to get medicine, so the window lets you avoid that,” he said.

Children were also in mind when the Zauchins, who have three girls of their own, devoted space to a children’s area that will feature puzzles and other things to keep young ones entertained.