Oak Mountain storms back for victory over Thompson 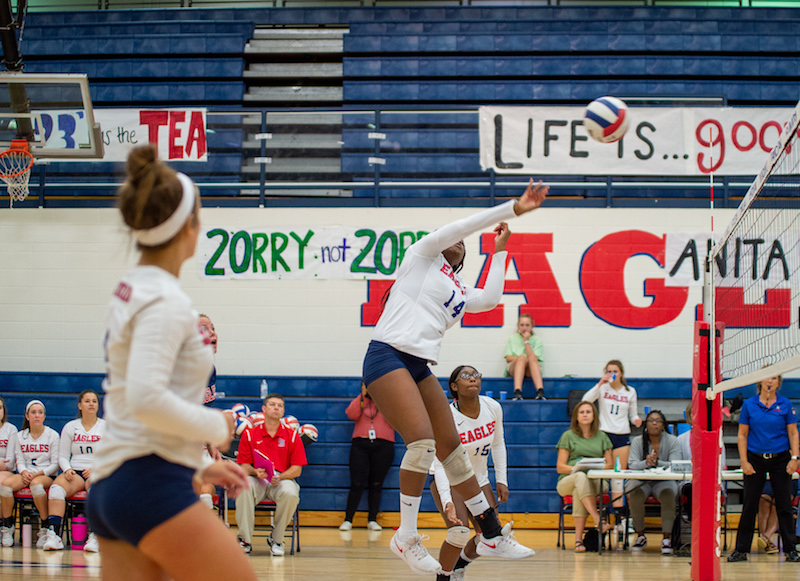 Despite falling behind two sets, Oak Mountain was able to comeback for a 3-2 victory in an area match. (Reporter photo/Keith McCoy)

NORTH SHELBY – After falling behind two sets to none against the visiting Thompson Warriors, the Oak Mountain volleyball team bounced back to win a slim third set, before then going on to win the fourth set and a tie-breaking fifth set to down the No. 7 team in the 7A Classification.

The comeback victory not only marked one of the biggest wins of the season for the Eagles, but also gave them their first area win of 2019. After losing to No. 3 Hoover in straight sets on Sept. 10, Oak Mountain fell to 0-1 in area play, but has now evened its record at 1-1 with the win over the Warriors.

With Class 7A, Area 5 only playing one regular-season area game against each opponent, that’s a crucial win that could give the Eagles the No. 2 overall seed heading into the area tournament.

Early on, it looked as if it would be the Warriors improving to 2-1 in area play, which would have locked up the No. 2 seed for them with wins over Tuscaloosa County and Oak Mountain.

Thompson came out strong in the first set looking to respond from a 3-2 loss to Spain Park earlier in the week. The Warriors were able to do just that and built some early momentum with a 25-20 first-set victory.

The Warriors took advantage of that win and carried the momentum over into the second set.

Oak Mountain struggled to find answers or hold serve in the second set, as Thompson continued to build confidence on each point. Eventually, the Warriors went on a run and pulled away for the most dominant set victory of the match by a final of 25-14 to take a 2-0 lead in the match.

With the Eagles unable to find answers and Thompson coming off a 25-14 victory with a 2-0 lead, the momentum was completely in the Warriors’ favor moving to the third set as they looked to close out the sweep.

Again, Thompson played well throughout the set, but something started to click for Oak Mountain.

Despite the Warriors continuing to make big plays, this time around the Eagles had answers.

They eventually gained match point at 24-23 with the match on the line, and didn’t give Thompson a chance to end it as they closed out the set with one last point for a 25-23 victory.

Oak Mountain still had to win two sets in a row to complete the comeback, but you could sense a major shift in momentum with that third-set victory, as the Eagles had a newfound confidence.

That led to their best performance of the match in the third set, as the resiliency of the team showed off with a late push to pull away for a 25-21 win in the fourth set to tie the match at 2-2 and force a decisive fifth set.

Now with both fighting for the win and no comfort of their being another set, both teams came out battling in the final set, which led to a compelling back-and-forth match.

Having to win by two points, playing to 15, the two got to a 15-15 tie after one match point was staved off.

The Eagles, however, won the next point to take a 16-15 lead. Madison Como then stepped to the service line and served a ball deep that deflected off a Thompson player’s hands and went backwards out of bounds to give the Eagles the game-winning point.

Flipping the momentum in the third set, Oak Mountain went on to win three consecutive sets to pull off the incredible comeback capped off by the 17-15 win in the tiebreaker.