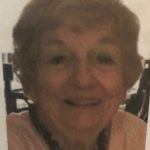 Gloria poured herself into being a wife and stay-at-home mother of two.

Much of her life has been about dancing.

“My parents danced,” she said. “My father had a dancing school.”

She recalls her sister Joyce, and she always said, “We learned how to dance first and then stared walking.”

It was the lure of dancing that guided her to the chance encounter of meeting the gentleman who at the age of 82 would become her new husband.

In 2005 she learned of a Line Dance event being held at the grand opening of the Pelham Senior Center.

Little did she know she would dance her way right into the waiting arms of Dick Francis Paxton.

The Pelham Senior Center and the couple’s love of dancing have remained a focal point in their lives since the couple married 14 years ago.

Gloria has taken on the task of decorating the tables at the center.

She spends time shopping for items and even making decorations herself, such as a centerpiece for each of the large round tables at the center.

Gloria designs each centerpiece herself for each of the 12 months of the year.

Pursuant to her interest in dancing, she works tirelessly coordinating the Ballroom Dance events hosted by the senior center.

Printing and selling tickets, advertising and deciding entertainment requires the investment of about 100 hours of Gloria’s time in preparation for the event.

She manages to sell at least 80 of the 100 tickets she has printed for each dance event.

She assists with the Yellow Dot program campaigns from time to time.

It is such an important thing to be able to have information in place in the event of an emergency.

“I can’t understand why anyone would not want to be registered,” Gloria said.

Yellow Dot is designed to assist Alabama citizens and emergency personnel first responders in the event of an automobile accident or other emergency involving the participant’s vehicle.

Gloria has also been involved with the Community of Hope Clinic.

Based in Pelham, CHC is a medical mission that provides non-emergent care of Shelby County adults age 19-64 and have no medical insurance and whose household is below 200 percent poverty level.

Gloria has logged more than 4,000 hours since becoming a RSVP member in 2009.

She is a recipient of the Gold Presidential Volunteer Service Award.