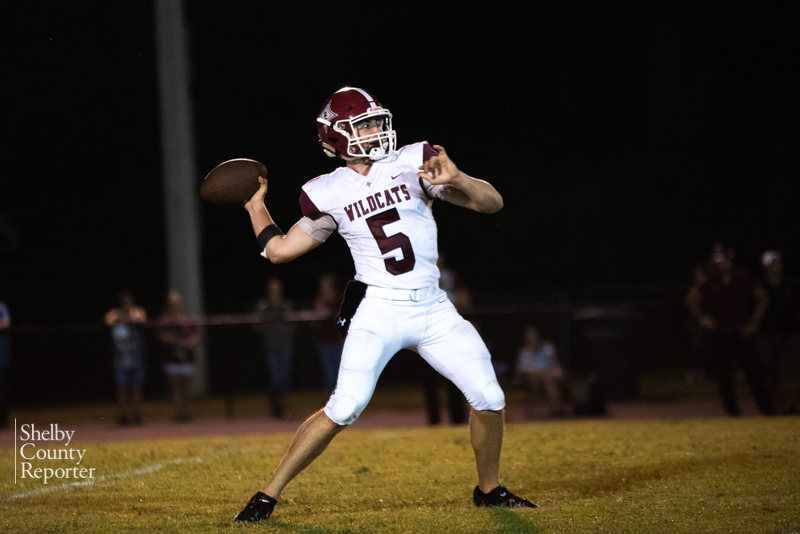 Shelby County quarterback Chase Holliman battled for the Shelby County offense in another strong effort, but an injury and defensive struggles led to the Wildcats' sixth consecutive loss. (File)

MOODY – It was another tough night for the Shelby County Wildcats on Friday, Sept. 27, as they hit the road for an out-of-region matchup with the Moody Blue Devils, but a night of injuries and defensive struggle led to sixth consecutive loss to start the 2019 season, this time by a final score of 41-20.

Despite the Blue Devils having scored just six combined points in their last two games, Shelby County’s defense, which has now given up 40 or more in each of the last five games, struggled again, while an injury to Wildcats’ quarterback Chase Holliman also hurt the offense in an effort that saw them continue to fight until the end.

Early in the first quarter, the Wildcats seemed to be rolling along with a strong drive that was capped off by a short touchdown run to put them on the scoreboard first, but the Blue Devils had a big response.

They were able to score 21-unanswered points to take a 21-7 lead late in the second quarter.

Behind the eight ball and needing a big answer, the Wildcats were able to find exactly what they needed with a 15-yard touchdown pass on a post route toward the back center of the end zone that cut the deficit to 21-13 heading into the halftime break.

Coming out of the half, the Wildcats were hoping they’d be able to build off of that momentum swing, but instead it was the Blue Devils who were able to shift the momentum right back in their favor with another big swing behind 20 third-quarter points.

The Wildcats were able to post one more touchdown to get to the 20-point mark, but being outscored 20-7 since cutting it to one score put them in a deeper hole heading to the final quarter, which became too much to dig out of despite the effort.

With the loss, Shelby County fell to 0-6 on the season, and will now host a a 3-2 Demopolis team on Friday, Oct. 4, looking to build some momentum heading into a bye week the following week.