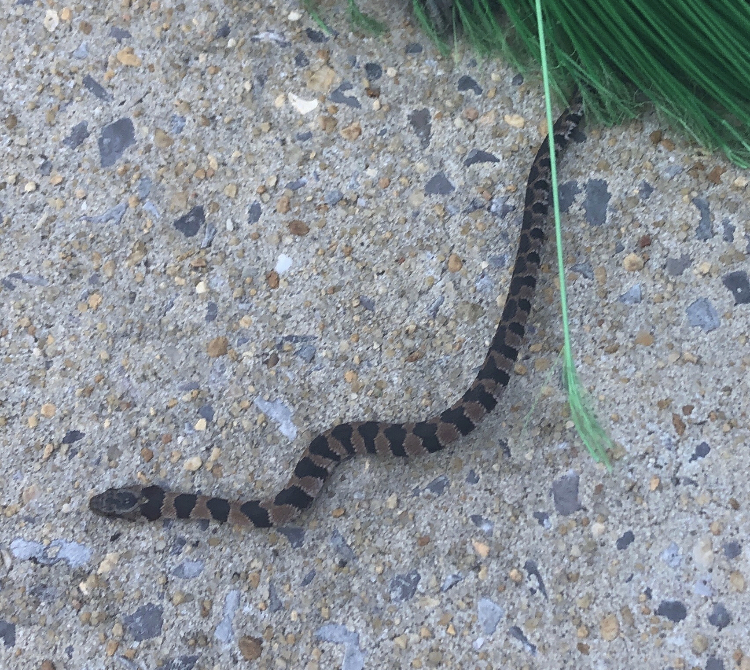 Students in Mrs. Long’s class at Elvin Hill Elementary School spotted a snake in their classroom on Sept. 5. (Contributed)

Mrs. Long’s second grade class at Elvin Hill Elementary School recently got an unexpected visitor that caused quite a bit of excitement.
On Sept. 5, the second graders were lining up to go to P.E. when Kenna‘D Buie noticed something unusual going on near the snack cubbies.

Buie whispered to her neighbor about what she had spotted because it was still math time.  That’s when a third child, Kinsley Jones, caught sight of what was happening and yelled, “Snake!”
When the commotion began, Mrs. Long had been giving a few students her undivided attention at her desk, while the others were lining up.

“Sometimes they want to share various things from their morning or evening and I try to give them 100 percent,” Long said. “I could tell something was happening as I was trying to focus on the child in front of me, but I thought I heard the other kids saying ‘snack.’ It didn’t register at first that they were actually saying ‘snake’ until Kinsley popped up. That’s when I saw it.”

Not knowing if the intruder was an immediate danger to her students, she worked hard to stay calm so her children would follow her example.

She quickly instructed the four children closest to it to go out of the room into the pod quietly, while the rest were behind her across the room.

“I quickly gave the snake a once-over to see what I was dealing with and came to the conclusion that it was most likely non-venomous, but I was still terrified that it was going to get away,” the teacher said.

She grabbed the classroom broom and held the snake at bay.

“I was worried someone would get hurt if it got away, or that we’d be dealing with a surprise again later if we didn’t catch it,” she said.

When Mrs. Scoggins from the pod popped her head in and saw what was happening, she immediately sent for help by way of students Lynlee Morgan and Derek Woods.

While they waited on the beloved school custodian, Mr. Wayne, another school employee entered the class and ushered the remaining children out their back door and over to their P.E. class. Mr. Wayne swooped in shortly to save the day and rid the room of a rogue baby rat snake.
We had the opportunity to interview Mrs. Long’s class a few days after the ordeal.

While they could not agree on the size of the snake, they did all agree that their teacher did a great job of handling the surprise when many of them were afraid.

Brayden Nichols, however, thought the snake might be after the chicken that was in his lunch box in the snack cubbies.

Mrs. Long said she was so proud of how well her class followed her instructions and helped her keep the situation calm so everyone could stay safe.

“It’s very important to holler and let your teacher know if you see a snake,” Hannah Arnold said.