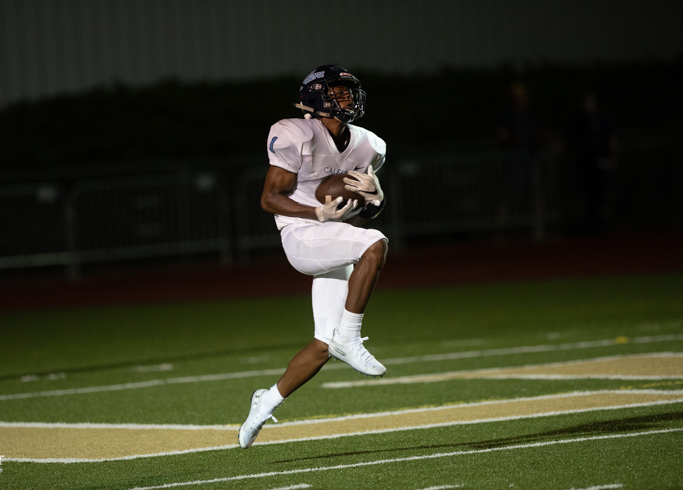 Despite a better second half, Calera couldn't overcome a 28-7 halftime deficit and a strong Bibb County rushing attack on Friday, Sept. 27. (File)

CENTREVILLE – Junior running back Deshun Murrell ran for five touchdowns, four in the second quarter to lead Bibb County to a 40-21 victory over visiting Calera on Friday, Sept. 27.

Murrell had 27 carries for 229 yards, which included a pair of rushing touchdowns of more than 40 yards.

The visiting Eagles trailed 28-7 at halftime, but struck on a long touchdown pass (48 yards) from senior quarterback Quin’Darius Crews to senior wide receiver Dallas Toles on the first possession of the second half which made it a two-touchdown margin. Bibb County countered with a quick scoring drive of its own, moving 70 yards in just three plays, ending on a 45-yard touchdown run by Murrell, his fifth of the game.

After a scoreless first quarter, the Choctaws took advantage of a short field. Murrell ended a four-play drive with an 8-yard scoring run. After holding the Eagles to a three-and-out, the Choctaws had a second four-play drive ending this time with a 24-yard rushing touchdown by Murrell.  A successful 2-point conversion made it a 15-0 lead with just over six minutes remaining.

The next possession saw the Eagles turn the ball over on downs after four plays. Starting a new drive with the ball on their own 43-yard line, junior quarterback Cole McCarty hooked up with senior wide receiver Brody Seales for a 51-yard pass play to advance the ball to the Calera 6-yard line. Two plays later Murrell had his third rushing touchdown of the quarter, this time from 2 yards out for a 22-0 lead.

On the first play of the ensuing possession, a pass downfield by Crews was intercepted by Choctaws’ senior Mikal Moton and returned it to the Calera 31-yard line. A holding penalty on the return pushed the ball back to the 41-yard line. There, Murrell broke through for a 41-yard touchdown run, his fourth of the quarter. The extra point was missed to make it a 28-0 game with just over three minutes left.

Taking advantage of a pair of Choctaw penalties, the Eagles got on the board with 26 seconds remaining in the half. Senior running back Ashton Shoddie scored from 1-yard out. Junior Jordan Helm kicked the extra point for a 28-7 game.

Leading 34-14 in the latter minutes of the third quarter, junior Letrell Morrison closed out the scoring for the Choctaws with a 40-yard touchdown run.  Late in the fourth quarter, the Choctaws fumbled the ball deep in their end and it was recovered in the end zone by the Calera sophomore Kobe King to close out the scoring.

Bibb County remains undefeated at 6-0 and will travel to Jemison next week, while Calera (1-4) hosts Selma High School next.