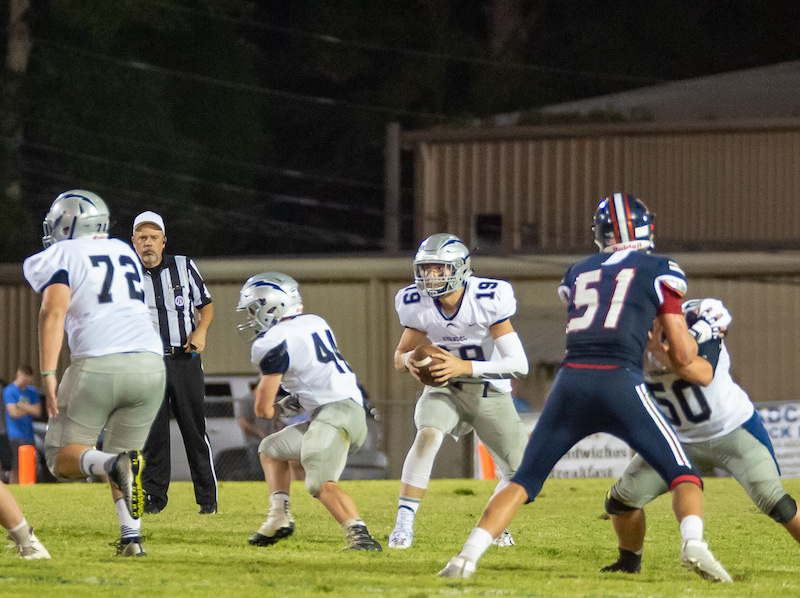 The Evangel Lightning picked up a dominant 44-6 victory over Meadowview on Friday, Sept. 27. (For the Reporter/Larry Dancy)

“It’s a good win for us to get back on the winning side after last week,” ECS head coach Tim Smith said. “The kids were excited. They practiced hard this week. We’re like every team in Alabama. We’re battling this heat in almost October. It took its toll.”

The Lightning struck quickly, scoring on an opening kickoff return by Will Ferrell and didn’t look back. ECS didn’t let up, as Tyler Henderson completed 4-of-5 passes for 71 yards and three touchdowns in the first quarter. Noah Shears scored on a 38-yard screen pass, Jett Lodge caught a 21-yard touchdown pass and Yura Gothard’s added a touchdown reception of 9 yards. Henderson’s only incompletion was a dropped pass on a potential fourth touchdown.

Ferrell also returned a punt for a touchdown to help Evangel carry a 36-0 lead into halftime.

With the starters pulled entering the second quarter, Evangel relied on the ground game of its second string in the second half. Backup quarterback Eli Whitfield led the team with 82 yards. Andrew Stafford scored a second-half touchdown and rushed for 39 yards.

Sophomores Thomas Koch and Zach Chandler stepped up on the line, with Chandler leading the team in tackles (7), followed by Noah Murdaugh’s five tackles.

“We got to let the young kids play a lot. They got significant playing time. We have a couple of kids that are growing up in front of us this year that are starting to get more and more time on varsity,” Smith said.

Evangel (4-2) returns to 8-man football and opens conference play on Friday, Oct. 4 when it meets Ezekiel Academy (5-1) at Edgewood Academy in Elmore, Alabama.