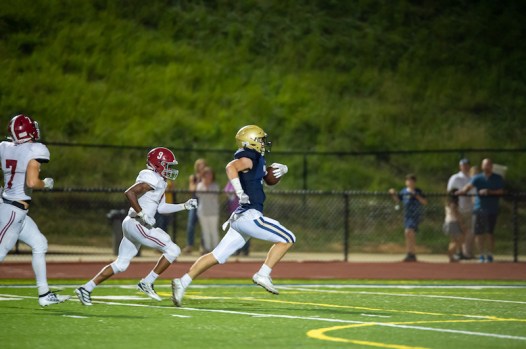 Briarwood's Blake McKenna had two late touchdowns in the Lions' win over Hartselle on Friday, Sept. 27. (For the Reporter/Larry Dancy) 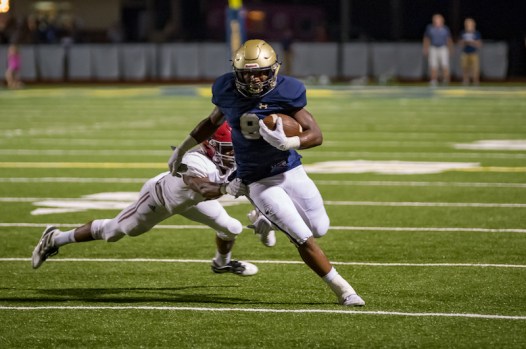 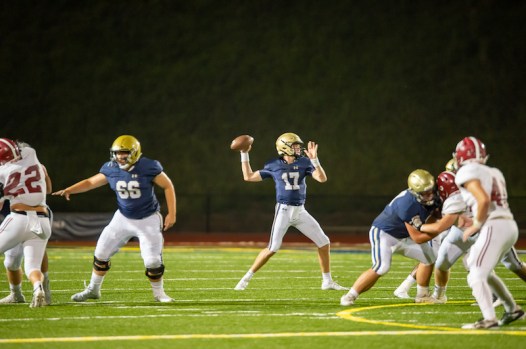 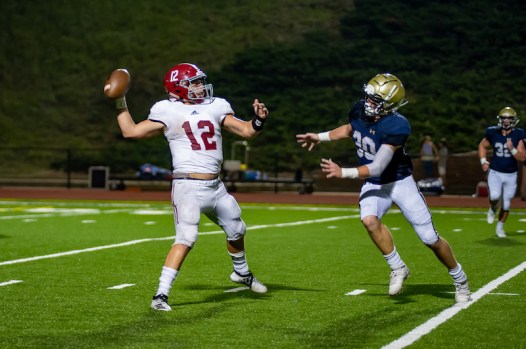 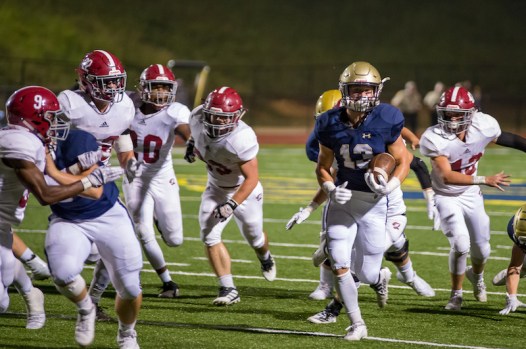 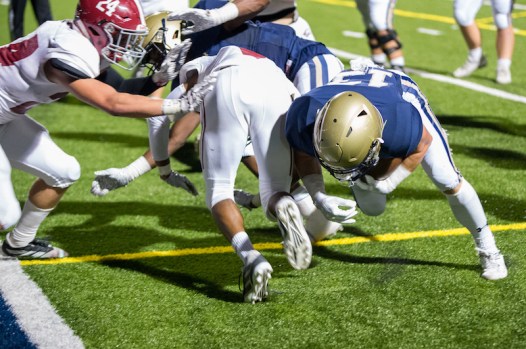 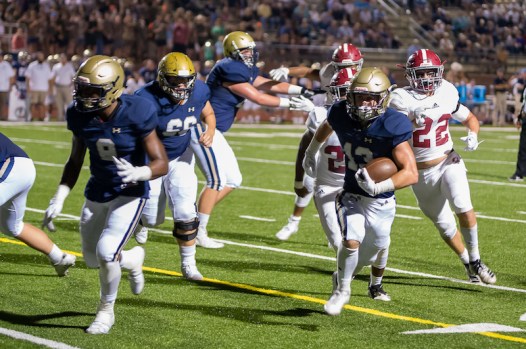 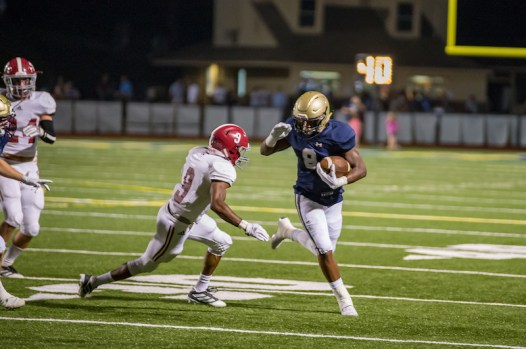 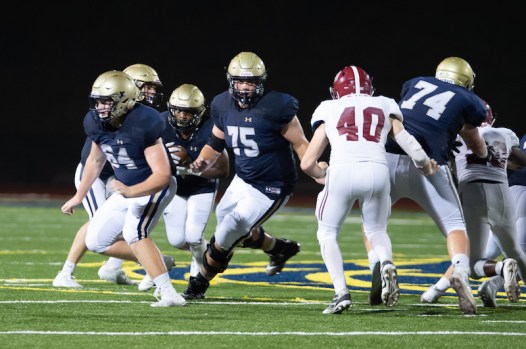 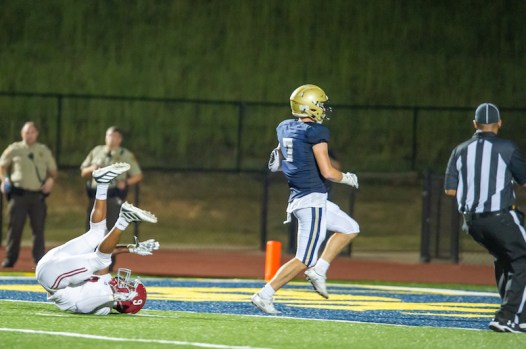 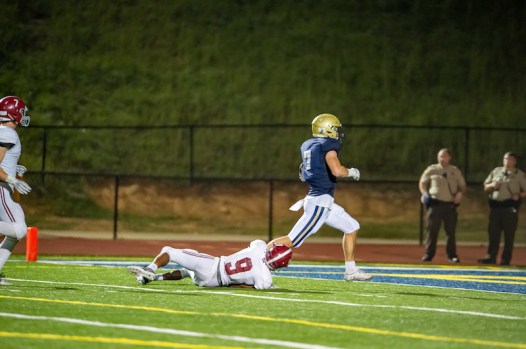 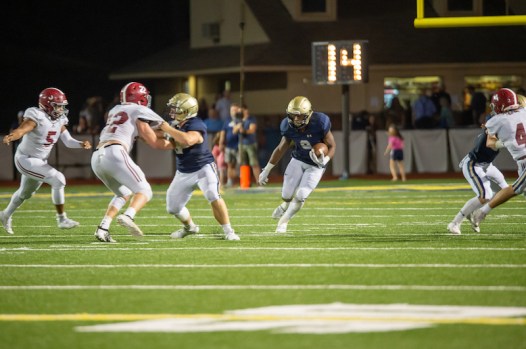 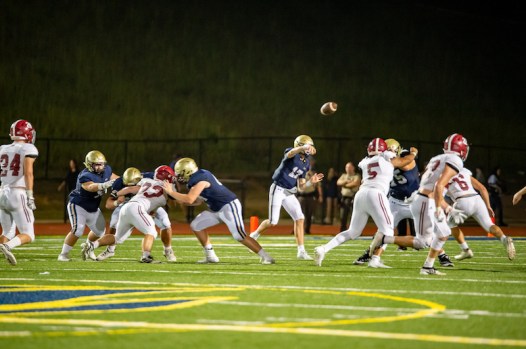 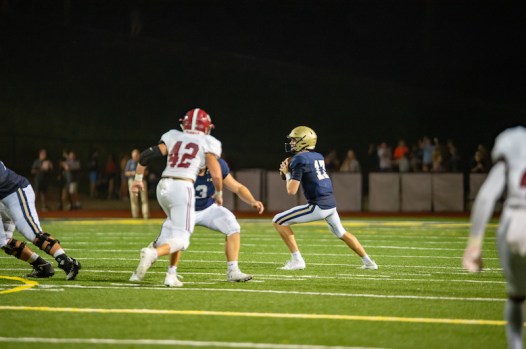 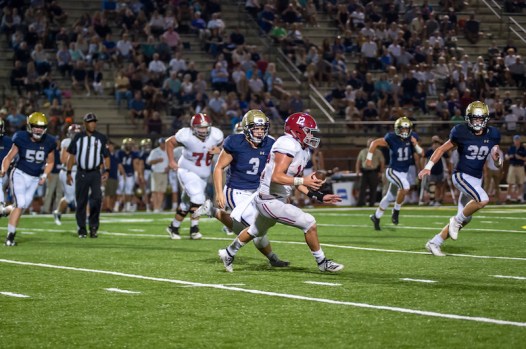 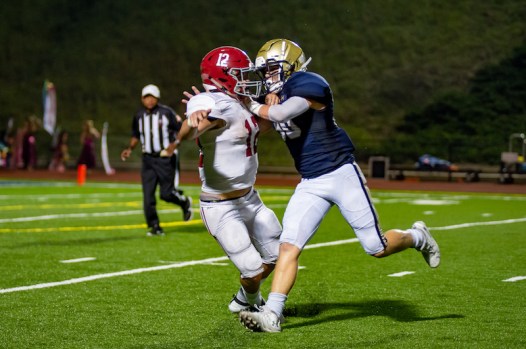 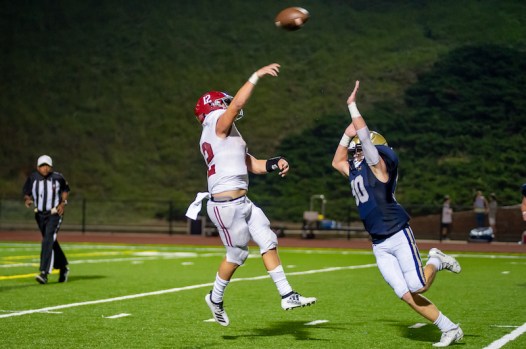 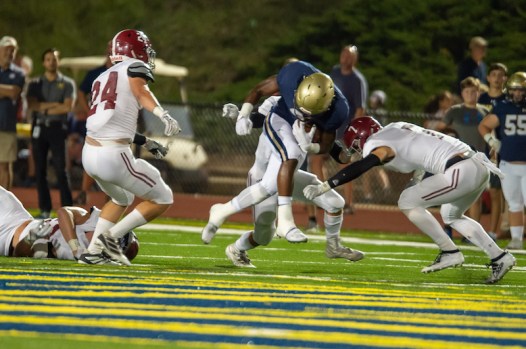 BIRMINGHAM – A stellar performance by Briarwood wide receiver Blake McKenna and stingy defense helped propel the Lions to a 21-10 non-region win over Hartselle in front of the home crowd on Friday, Sept. 27.

McKenna hauled in several catches to top more than 100 yards receiving, but none were bigger than a pair of touchdown receptions in the fourth quarter that went for 65 and 30 yards to seal the game for the Lions.

“He’s a battler, he’s a fighter and I’m really proud of him,” Briarwood head coach Matthew Forester said of McKenna. “Earlier in the season he had a few miscues but the mental toughness for him to hang on and battle…. The stats will never show last week at how amazing he blocked. He’s picked up his game in every area.”

Even though Briarwood found success offensively in the second half, points were tough to come by for both teams in the first half.

Hartselle opened the game with a nice drive but ultimately came up short when Briarwood stopped the Tigers’ quarterback sneak as they attempted to convert a fourth-and-1 from the Lions’ 8-yard line.

Following the turnover on downs, both teams traded fumbles as neither team could put points on the board after one quarter of play.

However, less than a minute into the second quarter Briarwood was able to break the scoreless tie thanks to a spectacular diving catch by McKenna that went for 41 yards to the Hartselle 30-yard line.

A few plays later, Briarwood running back Luke Reebals ran it in from 7 yards out to make it 7-0 Briarwood with 11:10 to go in the second quarter.

Late in the second quarter, Briarwood committed a special teams mistake as a high snap sailed over the head of the punter, which set Hartselle up deep inside Briarwood territory with a chance to tie the game before the half.

Briarwood’s defense stood tall though, as the Lions held Hartselle to a 29-yard field goal to hold a slight 7-3 edge going into halftime.

In the third quarter, Hartselle took its first lead of the game by finding success in the ground game.

Following a 19-yard run down to the Briarwood 1-yard line, the Tigers punched it in to take a 10-7 lead with 5:45 to go in the third quarter.

Briarwood didn’t find the end zone in the third quarter and found itself trailing by three going into the final 12 minutes.

The final quarter belonged to Briarwood and McKenna, as Lions’ quarterback Christopher Vizzina hit McKenna in stride for a 65-yard touchdown less than a minute into the fourth quarter to help the Lions regain a 14-10 lead.

After forcing two defensive stops, Briarwood got the ball back at the Tigers’ 29-yard line after a bad punt.

The Lions took advantage of the good field position, as Vizzina made a clutch throw on third-and-11 to find McKenna for a 30-yard touchdown over the middle. McKenna took a hard hit and was shaken up for a few seconds, but eventually ran off the field celebrating as Briarwood took a 21-10 lead with 6:10 to go in the game.

In desperate need of a score, Hartselle was unable to find the end zone as Briarwood’s Chase Travis came up with an interception with 2:39 left in the game to seal the win for the Lions.

“We were fortunate in the first half that we could really dictate what was going to happen down and distance wise so we did a good job,” Forester said of the defense. “Not on the opening drive, but after that it was kind of the same thing. The second half, they started mixing up the run and pass really well and at some point, we were able to just hold them and figure it out.”

With the win, Briarwood improved to 3-2 on the season and will face John Carroll in a region game at home on Friday, Oct. 4.