MONTEVALLO – City leaders have approved the proposed design of banners that will be displayed throughout Montevallo to honor veterans.

This banner honoring veteran Eugene B. Sledge is an example of the banners people can purchase through the Montevallo Main Street Banner Program. (Contributed)

“As promised, there is no cost to the city,” Montevallo Main Street Design Committee Chairman Kirk Lightfoot told the Montevallo City Council on Sept. 23. “I think it will be a wonderful project as we move forward.”

The banner program launched this summer to allow residents to honor veterans in their families and to promote patriotism in the city. 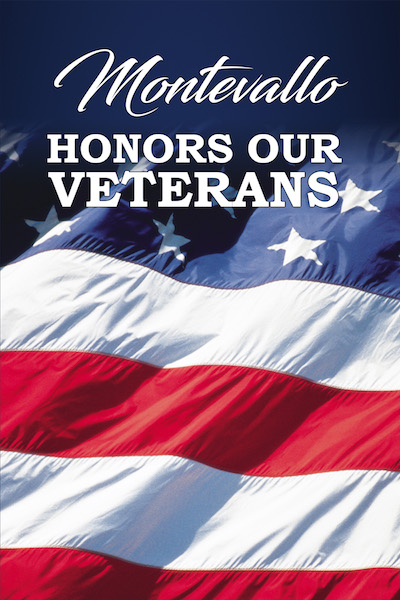 Patriotic banners will be displayed in Montevallo for Memorial Day, Independence Day and Veterans Day. (Contributed)

A portion of the purchase price of the banners will go toward the American Village Veterans Living Legacy.

The 30-by-72-foot banners will be located in prominent areas in Montevallo during May (Memorial Day), July (Independence Day) and November (Veterans Day), Lightfoot said.

After a guaranteed three-year display period, each banner will be returned to its purchaser.

In addition to the veteran-specific banners, 24-by-36-foot generic patriotic banners will be placed along Main Street prior to the holidays listed above.

The banners will supplement the American flags the city displays every year for the Fourth of July, Veterans Day and Memorial Day.

The City Council approved the banner design finalized by the Montevallo Main Street Design Committee and Main Street Board.