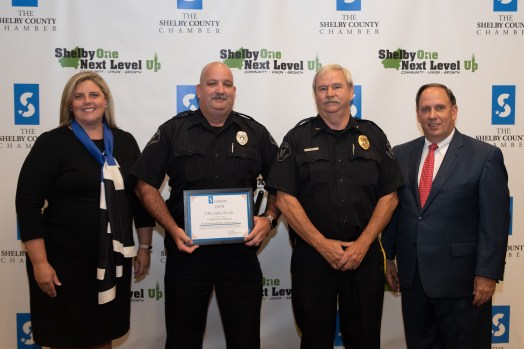 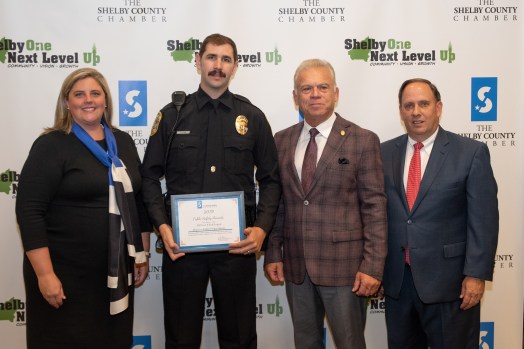 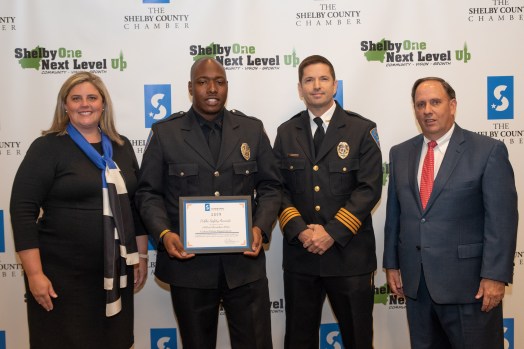 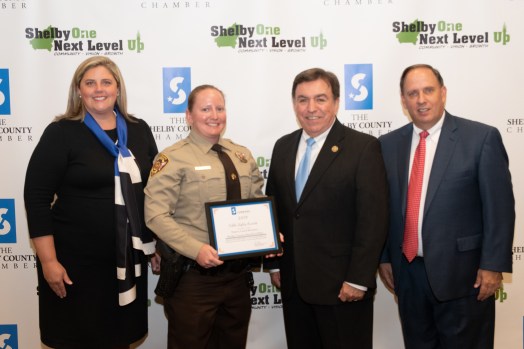 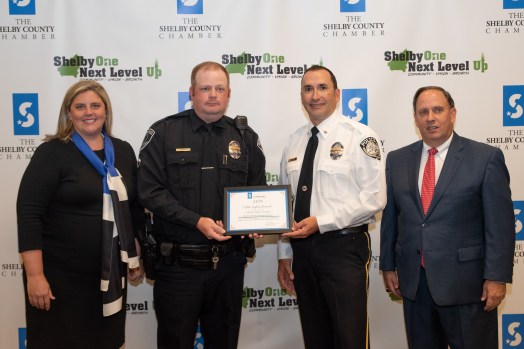 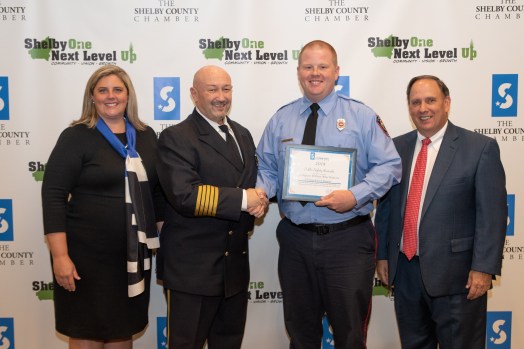 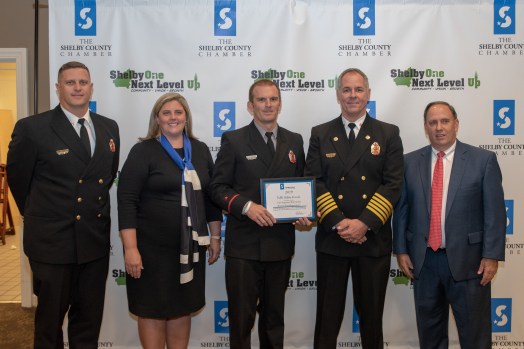 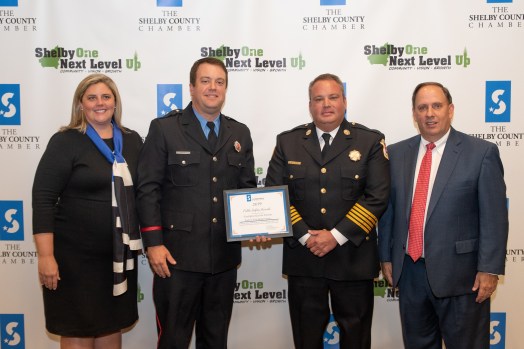 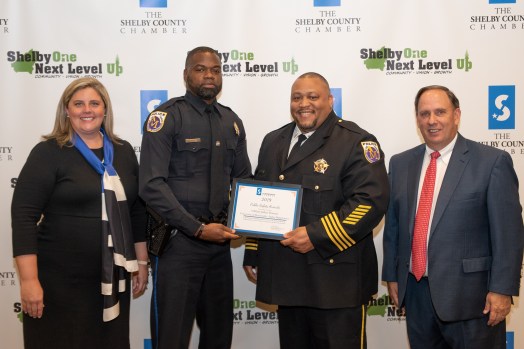 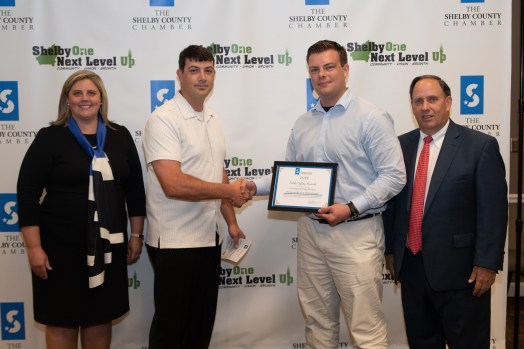 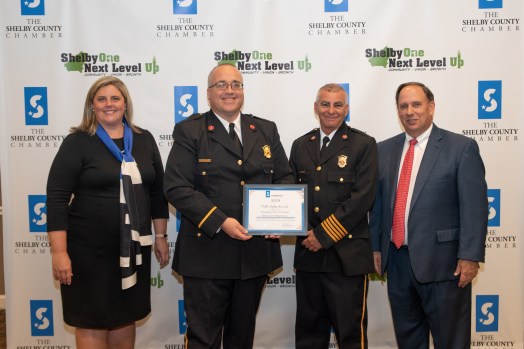 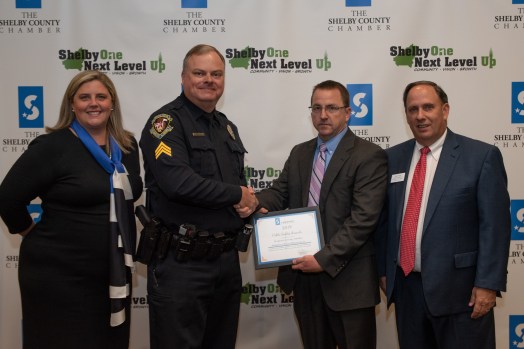 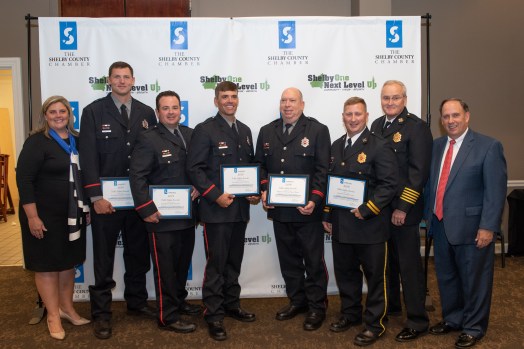 This year, Alabaster’s Firefighter of the Year Award was given to five firefighters who worked together to save a life on January 22, 2019. (Reporter photo/Keith McCoy) 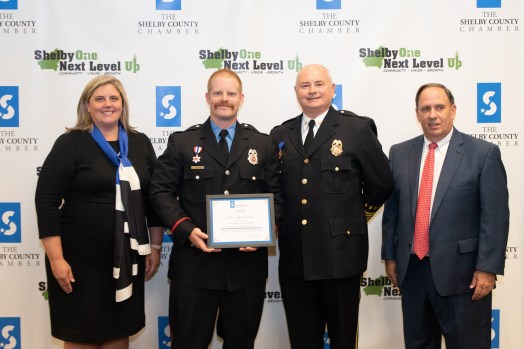 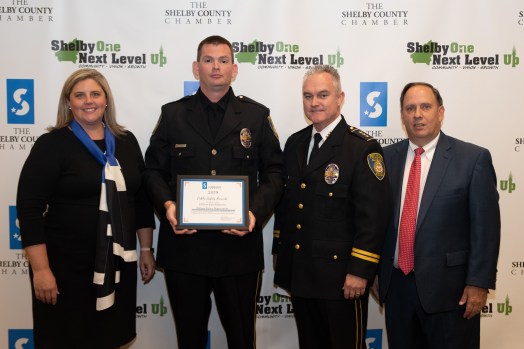 PELHAM – At The Shelby County Chamber’s annual Public Safety Awards luncheon on Wednesday, Sept. 25, 19 law enforcement officers and firefighters were recognized for their service to their communities.

In alphabetical order by municipality, here is what each representative had to say about their persons of the year:

Alabaster
Jeremy Medlin, Police Officer of the Year
APD Capt. Grant Humphries said Medlin has transformed the department’s continued education and training efforts by developing a new training curriculum. Medlin also developed a way to track training equipment within the department.
“He is capable of handling any assignment given to him,” Humphries said. “He has conducted more than 4,000 training hours for the department. The training opportunities he’s provided to our officers has been invaluable.”

Zachary Cruce, Jeral Moses, John Aldrich, Zane Hawkins and Robert Smelcer, Firefighters of the Year
Alabaster Fire Chief Tim Love said this year’s Firefighter of the Year was awarded to five firefighters who worked together to save a life on January 22, 2019. On that day, Alabaster firefighter responded to a call about a structure fire with reports of victims trapped inside. The residents were located in the house, but they were in a spot that was difficult to get to access. Ultimately, the men were able to locate and remove two people from the house. One person, an elderly woman, was pronounced dead at the scene, and another female, who was unconscious at the time of the rescue, was transported to UAB hospital.
“This was a team effort to save a life,” Love said. “After months of recovery, she was able to thank them in person.”

Calera
Brandon Allen, Police Officer of the Year
Calera Police Chief Sean Lemley said Allen has one of the best attitudes out of all the people he’s ever had the opportunity to serve with. Not only is Allen well-liked by his fellow officers and superiors, but Lemley said he’s perhaps the most productive officer in the department. A few months ago, Allen, who has served with the CPD for five years, went to police K9 training school to become a trained handler. Being that the K9 was born and trained in the Czech Republic, Allen had to learn to speak Czech in order to communicate with the dog.
“Within 30 minutes of returning to work with the dog, he was in the middle of conducting a search,” Lemley said.
Lemley said marijuana, methamphetamine and cocaine were among the contraband found. Another time during a routine traffic stop, Allen found 2 pounds of weed that was on its way to be smuggled into a state prison. Lemley said Allen is everything a police officer should be.
“If I could clone you, I’d make 10 more of you,” Lemley said.

Justin Thomas, Firefighter of the Year
Fire Chief Sean Kendrick said Thomas was nominated by one of his coworkers to receive this award. In letter to Kendrick, a fellow firefighter referred to Thomas as a natural-born leader who is attentive, takes the time to teach others and “is absolutely incredible at it.” This coworker said working with Thomas has made him a better medic.
“Justin has a servant’s heart and spends time tutoring the younger EMTs and medics,” Kendrick said. “He plays a role in just about every part of the department. He’s always willing to serve.”

Chelsea
William “Billy” Ricketts, Firefighter of the Year
Even though Ricketts has only been with Chelsea Fire and Rescue for two years, Chief Wayne Shirley said he’s made a big impact on the department.
“He’s one of those who contributes every day,” Shirley said.
At the end of the day when everyone has completed their assigned chores around the fire station and are relaxing, Ricketts always finds another task around the department to complete.

“He wasn’t selected based on one particular accomplishment,” Shirley said. “He has a servant’s heart and his dedication shows every day on the job. My hope is that he will continue to be upwardly mobile in our department in the future.”

Columbiana
Clay Morgan, Police Officer of the Year
Columbiana Police Chief Lamar Vick said Morgan is a strong presence in the city of Columbiana. He’s been with the department for four years on the night shift.
“It’s a different world when it gets dark and he knows the city,” Vick said. “He knows what cars are supposed to be in what parking lot and he’s been instrumental in making burglary arrests. I’ve gotten calls from people saying how much they appreciate him for sitting outside of their business when they get there at 3 a.m. to start prepping for the day.”

Harpersville
Cody Wilcox, Firefighter of the Year
Wilcox was selected as Harpersville’s Firefighter of the Year by his peers, said Fire Chief Heath Confer. Although he is only 21 years old, Confer said Wilcox is well-respected within the department. He works part-time in Harpersville and fulltime with Cahaba Valley Fire Department. Confer said Wilcox is a leader in the department when it comes to EMT and patient care services.
“He is wise beyond his years and he represents both departments very well,” Confer said.

Helena
Adam Sample, Police Officer of the Year
As the son of a man who worked in law enforcement for several years, Chief Pete Folmar said Sample has law enforcement in his blood. He’s been with the HPD since 2015 and in that time Folmar said he’s found that Sample is self-motivated and requires little supervision. Over the years he’s been instrumental within the department, whether its arresting rapists or talking down a disturbed teen who intended to kill their parents, Folmar said Sample follows through with his cases as far as he can.
“He wasn’t selected for just one particular thing, but for his consistency and dedication over the years,” Folmar said.

Heath Bartlett, Firefighter of the Year
Chief Peter Valenti said Bartlett has been vital in growing the department’s Explorers program from four to 29. The program is now among one of the state’s largest Explorer programs. The group helps with traffic on football game days and participates in Explorer competitions. Over the years, seven Explorers have gone on to become firefighters, three are medics, three are EMTs, four went to the military and some are currently in EMT school.
“He took over that role and never looked back,” Valenti said. “He’s an incredible mentor to those children.”

Hoover
Chad Logan, Police Officer of the Year
Chief Nicholas Derzis said Logan exemplifies everything he looks for in a police officer. Derzis pointed out one particular incident where Logan helped locate a gas station burglary suspect. The suspect attempted to shoot two people in the head, but both times the gun did not discharge because the suspect failed to chamber a round. Within an hour of the burglary, Logan observed the suspect and followed him into an apartment complex. A manhunt ensued and the suspect was found with the help of a k9 and taken into custody.

Ben Clarke, Firefighter of the Year
Chief Clay Bentley said it’s hard to out-work Clarke. The department’s goal is to be the best it can be for the citizens and visitors of Hoover and Clarke represents that every day.
“He is what we believe a Hoover firefighter should be,” Bentley said. “He’s a mentor to younger firefighters, he provides great customer service with a smile and he does things behind the scenes without other realizing it. He’s one of the best we have.”
Clarke is also the department’s chaplain and often sacrifices his personal time to be there for firefighters in need.

Pelham
Kyle Roberson, Police Officer of the Year
Chief Pat Cheatwood said Roberson is the type of officer who goes above and beyond what is expected of him. He’s been with the PPD since 2015 and is respected among his peers and in the community. Cheatwood also noted that this year the Officer of the Year was selected by other officers.
“He has the respect of his peers because they see the hard work and dedication he exhibits every time he puts the uniform on,” Cheatwood said.

Adam Moore, Firefighter of the Year
Chief Tim Honeycutt said he expects and demands excellence from his team and Moore, a member of the department’s underwater rescue team, exemplifies excellence in all he does. In November 2018, Honeycutt said he displayed bravery during a mission at Lake Mitchell in Chilton County. A helicopter crashed into the lake, killing the two law enforcement officers aboard. The mission of the underwater recovery team was to find the bodies of the two officers. One rescuer went underwater and found one of the victims, but became entangled in the wreckage on his way back to the surface. Honeycutt pointed out that this took place in 50 feet of water with zero visibility. Without consideration for his own safety, Moore entered the water and freed the diver. During the process, the diver was not able to maintain his grasp on the victim, so Moore went and found the body again. Moore located the body and began making his way back to the surface when he, too, became entangled in the wreckage. He managed to free himself and recover the victim to help bring closure to the situation. The PFD awarded him the Medal of Valor for his bravery.

Shelby County Sheriff’s Office
Laura Richman, Deputy of the Year
Sheriff John Samaniego said Richman was selected for this honor because of her quick thinking and good decision-making during a life-threatening incident. In March 2019, Richman responded to a call about an accidental shooting on Alabama 280. A passenger in a vehicle accidentally shot himself in the leg.
“The leg wound was very serious and it was a life-threatening injury,” Samaniego said. “She recognized it for what it was and she applied a tourniquet and a medical bandage to the wound. She acted quick and without indecision. She was composed, had a calm demeanor and she applied her training.”
With only a few years of experience in law enforcement, Samaniego said the level of composure she exhibited was impressive.

University of Montevallo
JaRon Thomas, Officer of the Year
Chief Tim Alexander said it’s not easy to please 3,000 students, but Thomas carries that responsibility graciously. Alexander said his enthusiasm for the job is apparent and is reflected in the respect he receives from UM’s faculty and student body. Within the department, Alexander said Thomas is a mentor to new officers and even moved to the night shift to help and be more accessible to them. He also volunteers to work extra shifts and has made suggestions that bettered the department.