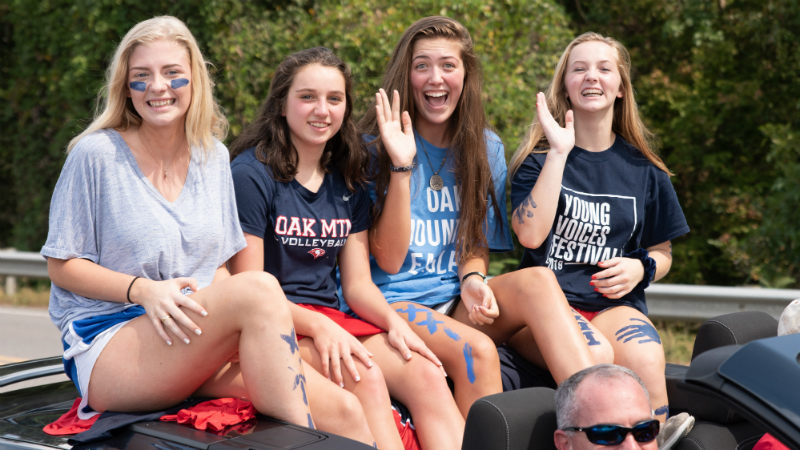 Oak Mountain High School’s homecoming week from Sept. 23-27 was no different. The week, with its theme of “A Night Under the Northern Lights,” began with Polar Express Day, during which students wore pajamas, and concluded with a homecoming dance at the Marriott of U.S. 280.

In between, the OMHS Student Government Association organized activities to ensure there was something for everyone.

“We try to make sure everybody at Oak Mountain has a chance to take part in something they enjoy doing,” SGA sponsor and AP economics teacher John Milton said.

So, in addition to the traditional powder puff football game and talent show, the week’s festivities also included a video game tournament with about 500 students competing in Super Smash Bros. and Mario Kart on a big screen in the school’s performing arts center.

There was also a school-wide student tailgate prior to the homecoming game against Pelham High School. Sponsored by the SGA, the tailgate was an opportunity for students to spend time together outside of school.

But what makes Oak Mountain’s homecoming unique is the students’ commitment to serving others during a time when it is easy and understandable to be inward-focused.

A canned food drive has coincided with homecoming week since 2014, with donations benefitting Oak Mountain Missions. This year, the drive netted about 4,800 cans of food.

“We have a lot of fun and a lot of cool events, but I’m most proud of how much good we do for people in need,” Milton said.

Stephen Dawkins is a staff writer for the Shelby County Reporter. He can be reached at 669-3131 ext. 537 or by email at stephen.dawkins@shelbycountyreporter.com.