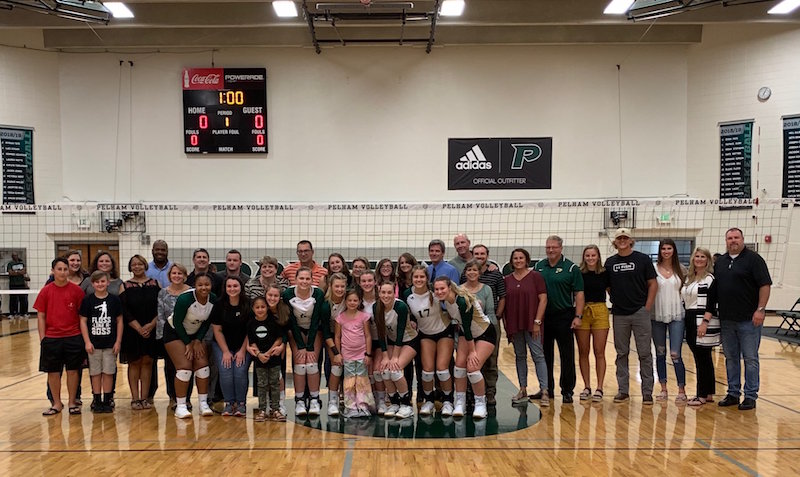 Pelham honored its nine seniors on Tuesday, Oct. 1, with a special ceremony and a sweep of the Helena Huskies. (Contributed)

PELHAM – The Pelham Panthers’ volleyball team has been on a roll as of late and looks to be a legit contender to compete for a state championship again in 2019 thanks to the contribution of nine trustworthy seniors.

On Tuesday, Oct. 1, those seniors were honored on senior night in front of the home crowd and celebrated with fourth area victory thanks to a sweep of county foe Helena.

With the victory, the Panthers moved to 4-0 in area play and have now won four matches in a row and six of their last seven with wins over every area opponent, including a season sweep of the Huskies.

The Panthers used that extra senior-night fuel to get off to a fast start and never look back.

Still though, the first set of the night ended up being the closest of the match as Helena also came ready to play against its rival. The Huskies hung tough for a while, but the closing ability of Pelham has been too much all season for opponents and continued to be the case in the opening set.

The Panthers eventually pulled away for a 25-20 set victory to take a 1-0 lead in the match.

Pelham was just getting warmed up and ridded the mistakes from its game in the second set, which led to a flawless performance and a dominant 25-11 win in the set for a 2-0 match lead.

Now in a 2-0 hole, Helena had a steep climb to get back into the match, and Pelham knew it.

The Panthers took advantage and continued their impressive play in the third set to complete the straight-set victory with a 25-15 win.

Pelham was led by three seniors in Long, Anderson and Snowden.

Long posted a team-high 11 kills in the win, while Chambers had a strong night with seven kills. Long also added five digs to her stat line, while Snowden and sophomore Tammy Melendez each led the team with 11 digs.

Anderson led the team in assists with 16, while sophomore Shay Walsh added 14 assists.

Pelham continues to improve and has just two area matchups left against Chelsea, Oct. 3, and Calera, Oct. 8, as the Panthers look to close out the regular-season area championship to earn hosting rights for the area tournament.