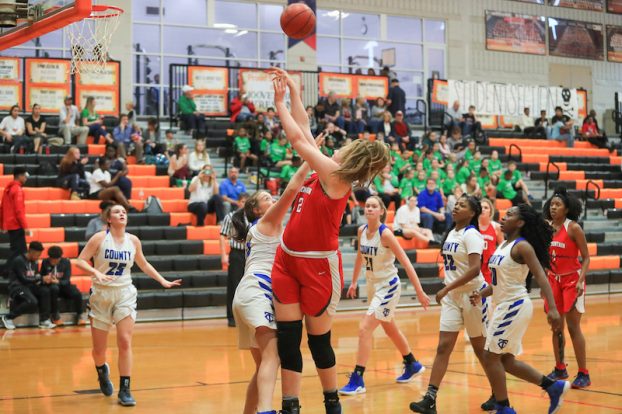 On Monday, Sept. 30, the senior announced that she would be attending the University of Louisiana Monroe to continue her basketball playing days as a student athlete.

In her time at Oak Mountain, Edwards has already left her mark on the team and looks poised for her best year yet going into her senior season in the next month.

Last year, Edwards wasn’t just the county’s best center, but was also one of the best centers in the state making her presence known in the post throughout her junior year.

She averaged the second most rebounds in the 7A classification last year with 9.1 rebounds per game and paired that with 15.1 points per game and a total of 68 blocks.

Due to her impressive effort, Edwards was named to the All-County First Team and was also named a member of the All-State Second Team, making her one of the 10 best players in the 7A classification last season.

Edwards will be joining a ULM Warhawks team that finished 10-19 last year overall and 4-14 in conference play, which should allow her to step in and battle to help them improve when she arrives next year.

Before she gets there, however, she still has one more season left with her Oak Mountain teammates.

Heading into her senior year, Edwards will look to build off of being one of the best players a year ago by becoming the best post presence in the state this year.

Last season, Oak Mountain finished one win shy of advancing to the Sweet 16 for the first time in a while, and this year, Edwards and the Eagles hope to get redemption for the heartbreak they experienced against Tuscaloosa County last season.