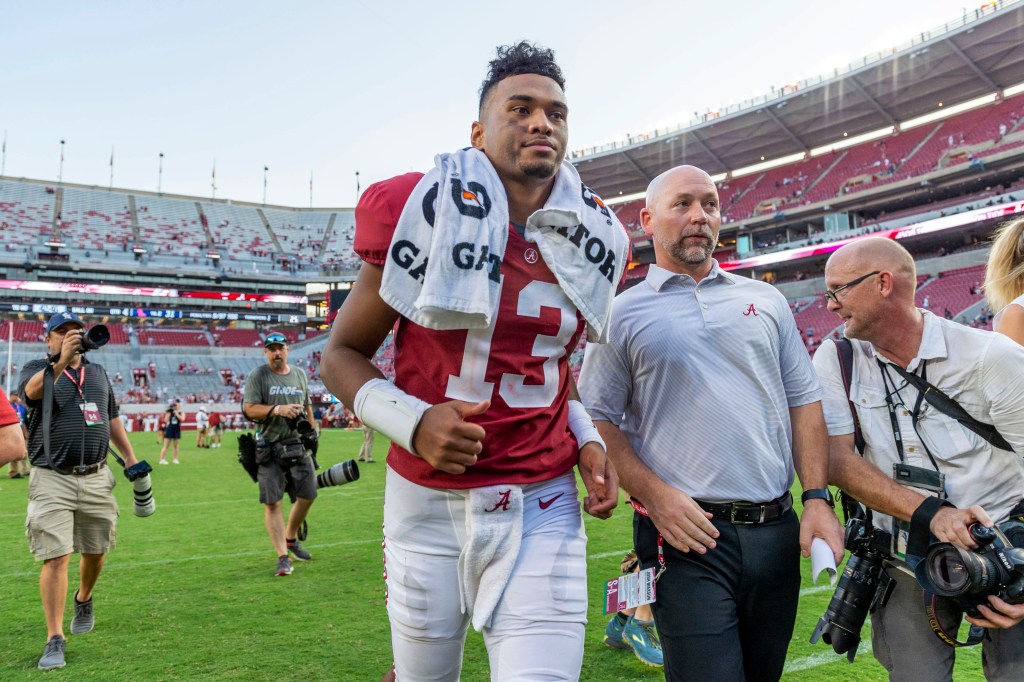 Alabama quarterback Tua Tagovailoa (13) jogs off the field after a victory over Mississippi in an NCAA college football game, Saturday, Sept. 28, 2019, in Tuscaloosa, Ala. (AP Photo/Vasha Hunt)

The Southeastern Conference seems to be in good playoff position with five teams ranked in the top 10.

The downside is they still have to play each other, giving this group arguably harder roads than any playoff contenders outside the league.

No. 7 Auburn still has four opponents remaining currently ranked in the top 10 starting Saturday at No. 10 Florida . No. 5 LSU and the Gators have three each while new No. 1 Alabama and No. 3 Georgia each must face a pair of top 10 opponents plus No. 25 Texas A&M.

The other, non-SEC teams in the top 10 collectively have two comparable regular season matchups left: No. 4 Ohio State vs. No. 8 Wisconsin and No. 6 Oklahoma against No. 11 Texas.

At least entering October, it gives room to brag for a league that has won nine national titles since 2006 _ starting with a string of seven straight.

Not that the SEC ever needs much encouragement in that regard.

“Of course, the SEC is the best conference in football, hands down,” Auburn defensive end Marlon Davidson said. “Any other team can say this and that, this league is better or whatever, but nah man, nothing compares to the SEC no matter what.”

The SEC’s top teams have indeed won some big head-to-head nonconference games, like Auburn-Oregon, Georgia-Notre Dame and LSU-Texas. Now, the coming gauntlet should soon start to whittle the league’s list of national contenders.

None of the top SEC teams have easy paths to the championship game in Atlanta. Or to the playoffs, though to this point there’s still a solid possibility of a pair of teams making it two years after Alabama beat Georgia for the national title.

Other teams like No. 2 Clemson , the defending national champion, Ohio State, Oklahoma and Wisconsin are still firmly in the mix as the nation’s top team.

None face the SEC-style gauntlet the rest of the way.

Here’s a look at the roads the league’s top 10 teams must travel still:

Road Ahead: Alabama has had an easy journey so far, rising to the top spot thanks to a series of easy wins over unranked opponents. It gets tougher from here. After an open date, the Tide visits Texas A&M, hosts LSU on Nov. 9 and then closes the regular season against Auburn in the Iron Bowl.

Challenges: A defense currently starting four freshmen has plenty of room _ and need _ for improvement. The Tide allowed 476 total yards and 31 points against Mississippi.

Road Ahead: The World’s Largest Cocktail Party against Florida in Jacksonville; at Auburn and home against Texas A&M.

Challenges: Even with veteran QB Jake Fromm, the passing game hasn’t been explosive. The running game and run defense have been the league’s best, though, and Fromm hasn’t thrown an interception.

Road Ahead: Hosts Florida and Auburn and Texas A&M but must travel to Alabama, which has won the last eight meetings.

Challenges: Like Alabama, LSU hasn’t been as dominant as usual on defense, especially against the pass. The Tigers, who still must face Tide quarterback Tua Tagovailoa, rank 69th in FBS in pass defense.

Road Ahead: With two wins over ranked opponents already, the Tigers may have the hardest remaining schedule of any of the playoff contenders. At Florida and LSU, home against Georgia and Alabama.

Challenges: As if the schedule wasn’t enough, quarterback Bo Nix is still a freshman even if he mostly hasn’t been playing like one.

Before the season, Gus Malzahn put Auburn’s schedule up on the board for his players. “I told the guys, ‘OK, here’s the big picture, all right? But that’s the last time we’re going to do that,’” the Tigers coach said.

Road Ahead: Auburn at LSU and against Georgia. At least only one of those games is in the opponent’s stadium.

Challenges: QB Kyle Trask has filled in more than capably since the injury to Feleipe Franks, but he’ll be tested even more. His starts have come against struggling Tennessee and Towson.