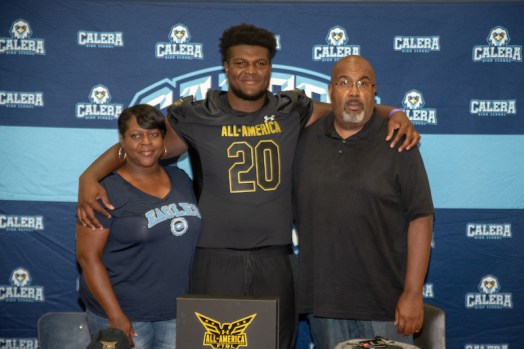 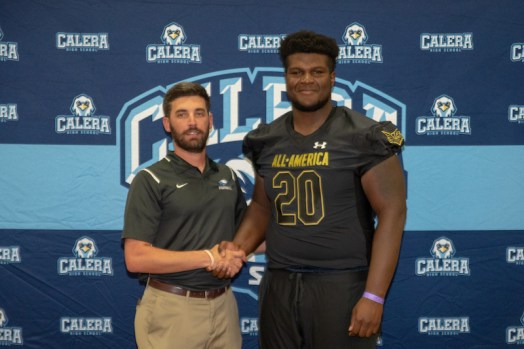 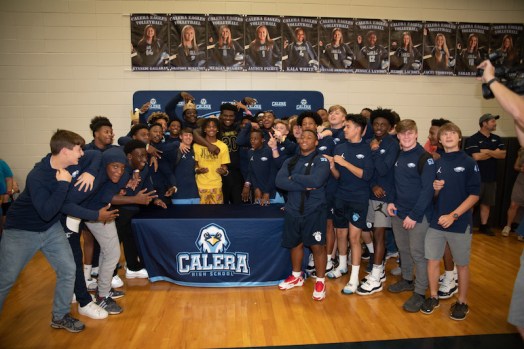 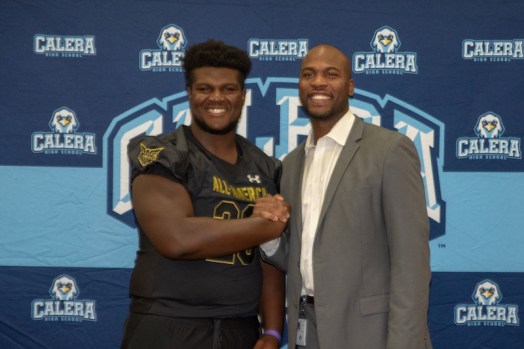 CALERA – Jayson Jones can officially be mentioned in the same sentence as some of the best collegiate and professional football players in the country after receiving his Under Armour All-American jersey at a school pep rally held at Calera High School on Friday, Oct. 4.

In front of the entire school, family and friends, Jones took a seat at a table set up with a box on top. After opening the box, he pulled out a jersey to officially accept his invite to the high school All-American game that honors some of the greatest high school football players in the country.

Jones, a commit to the Alabama Crimson Tide and head coach Nick Saban, becomes the second Alabama commit in as many years to be invited to participate in the game after Thompson offensive lineman Amari Kight played in the game last year.

This year’s game will take place in Orlando, Florida at Camping World Stadium on Jan. 2, 2020.

Jones joins other Alabama commits that have previously played in the game such as Julio Jones, Dylan Moses, Calvin Ridley, Jerry Jeudy, LaBryan Ray and several others. 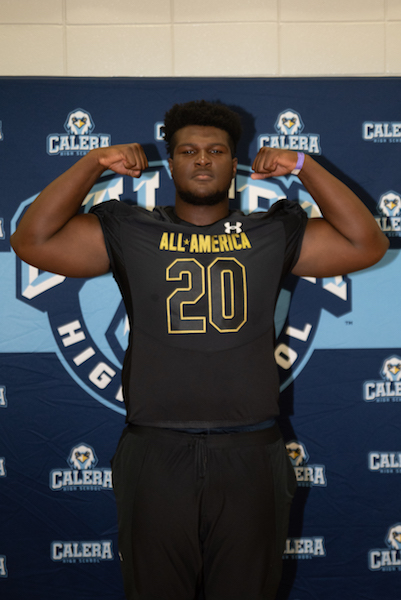 Other alumni of the game include NFL players like Deshaun Watson, A.J. Green, Jadeveon Clowny, Alshon Jeffery and many more.

A 6-foot-7 defensive tackle weighing 340 pounds, Jones has started at Calera since his freshman season and has big goals moving forward as he hopes to pursue professional career in the NFL.

“I’m realistic and I know how important education is,” Jones said before the season. “I will always focus on that, but committing to Alabama was almost a business decision. I have a chance, even if the odds aren’t high, to play highly in this sport, and Alabama is the place that can help me get to the next level.”

Right now, Jones still has five games left at the high school level, and it’s clear he wants to help his team turn things around to help set up a bright future.

Directly after putting on his jersey, several of his teammates mobbed him in celebration for a big group picture. Then, before going to enjoy the pep rally, he gave each of his teammates a high five as they walked to sit on the bleachers.

While he’s excited for the next level, it’s those moments that have made his high school career special, and it’s that kind of leadership he hopes to take to college.

The Under Armour All-American game selects only the top 100 high school players in the country, making Jones’ appearance in the game special for himself, his family, the city of Calera and the entire county as something that is extremely rare.

The game will be televised nationally with the channel and time to come at a later date. 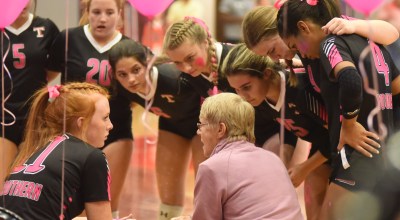