Helena takes over 1st in region after thrilling win against Chelsea

HELENA – Having missed a kick earlier in the game, Helena’s Logan Maloney stepped onto the field one more time with 34 seconds remaining in a region battle for first place with the Chelsea Hornets on Friday, Oct. 4, and this time he was overcome with calmness.

From 30 yards out, Maloney eyed the snap, saw it placed down and stepped up to boot the kick through the uprights to put the Huskies on top 31-28 in the final minute.

Chelsea made one final push with a 42-yard pass to Ladarius Gary on the ensuing drive, but a holding then pushed the Hornets back to the Helena 42-yard line. A few plays later, one second remained on the clock with the Hornets forced to kick a 47-yard field goal. The kick from Cooper Neal had the leg, but drifted wide left, as the Huskies went wild holding on for the 31-28 win.

“It was an emotional roller coaster really,” Busby said. “There’s a lot of emotion. We’ve put a lot of work in over the last 18 months. The kids have poured their heart and soul into this thing and to win a game like that kicking a field goal into the wind was special, especially for our kicker Logan Maloney. It’s pretty sweet.” 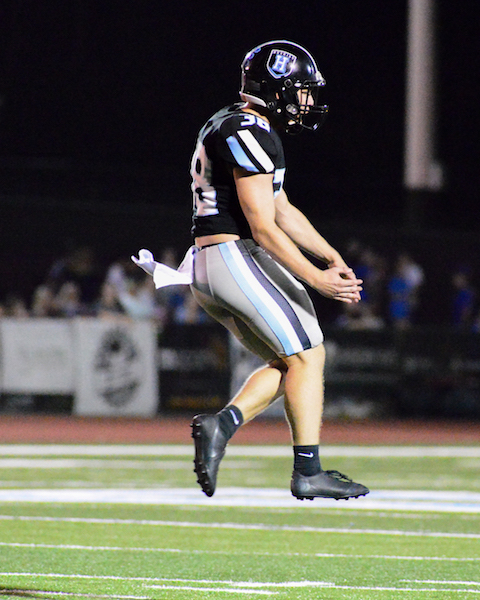 With the victory, Helena won its fourth consecutive game and improved to 5-1 overall and 3-0 in the region, as the Huskies are now atop the region standings as the last unbeaten team in Class 6A, Region 5.

“It’s huge for our kids and our seniors who bought in the day we stepped into the building here at Helena,” Busby said. “All the credit goes to them and they deserve every bit of this success.”

In the first half of the game, however, both teams struggled to move the ball offensively.

It was actually the Hornets who struck first at the very end of a quiet first quarter.

As time expired in the quarter, Adam Reaves snuck in the wildcat touchdown run to put the Hornets on top 7-0 heading to the second quarter. The score was set up by a 57-yard pass from Caleb Moore to Michael Gibbs and a 26-yard run from Collier Blair, all three of whom had stellar games.

But Helena had trailed at several times this year and had no panic.

“We’ve played from behind a lot this year,” Busby said. “Our kids just have a lot of resiliency and it’s because they’ve put in the work.”

And in less than four minutes, the Huskies marched down the field thanks in large part to a 25-yard run from Marquis Johnson. On third-and-7 from the Chelsea 12, quarterback Luke Stamba rolled out and hit Antonio Ruiz for a 12-yard touchdown pass to tie the game with 8:56 left in the second quarter.

That took us to the half, but the fireworks were still to come in the second half.

For a while, however, it looked like the Huskies were going to run away with it thanks to the strong running ability of both Johnson and Stamba.

Helena came out and scored on its first two drives of the second half thanks to two rushing touchdowns from Johnson—one from 7 yards out and one from 36 yards out.

Those two runs were part of a monster second half for Johnson, who finished the game with 292 rushing yards on 36 carries with those two touchdowns.

And it showed, as he ran at a different speed and physicality than everyone else on the field.

But the Hornets had won four games in a row, and despite trailing 21-7, they weren’t going to let first place in the region slip away without a fight.

One play after converting a fourth down a couple of drives later, Moore hit Gibbs for another big pass play, this time a 43-yard touchdown pass to bring the Hornets within a touchdown with 5:53 to play in the third quarter.

The Huskies went on to answer again on an 8-yard touchdown run from Antonio Ruiz, who had two touchdowns in the game, which put them up 28-14 with 31 seconds to play in the third quarter.

In the final quarter, however, Chelsea was able to find some magic and scored 14-unanswered to tie the game.

It started with a 5-yard pass from Moore to Holton Smith to bring the Hornets to within a touchdown with 11:20 to play, which capped off a short four-play drive thanks to another 43-yard pass to Gibbs.

And with 5:30 left, the biggest break of the game came for the Hornets. Jordan Thomas was able to force a fumble that Chelsea recovered at the Helena 23-yard line.

Eventually facing a fourth-and-5 from the Helena 18-yard line, Moore, who was comfortable throwing the football all night, stepped up and calmly hit his favorite target as Gibbs hauled in the game-tying touchdown with 3:51 to play.

On the ensuing drive, however, it was back to Johnson for the Huskies in a 28-28 game.

“He told us if we would run a certain play, he was going to break one,” Busby said.

And on the first play of the drive, Johnson found a seam for a 38-yard run to quickly put the Huskies in Chelsea territory.

“I kept on telling my coach to give me the ball and let me run counter and I’ll get it to the end zone,” Johnson said. “I just wanted to do whatever I could to help my team out.”

After three more runs from him, a 2-yard run from Kobe Hughes and a 12-yard run from Stamba, Helena had set up Maloney for what became the game-winning field goal in a thrilling finish.

Stamba added 53 yards on the ground for the Huskies on eight carries, while he also had 54 yards passing with two passing touchdowns running the offense.

Gibbs led Chelsea with 202 receiving yards and two touchdowns on six receptions, while Moore finished with 302 yards on 13-of-24 passing with three touchdowns. Blair added 45 yards on the ground.

With the loss, Chelsea fell to 4-2 overall and 3-1 in region play. The Hornets will now host Homewood on Friday, Oct. 11.

Helena will now travel to Carver-Birmingham on Thursday, Oct. 10, and don’t have a game left against a team with a winning record as they look to close out a region championship in the coming weeks.