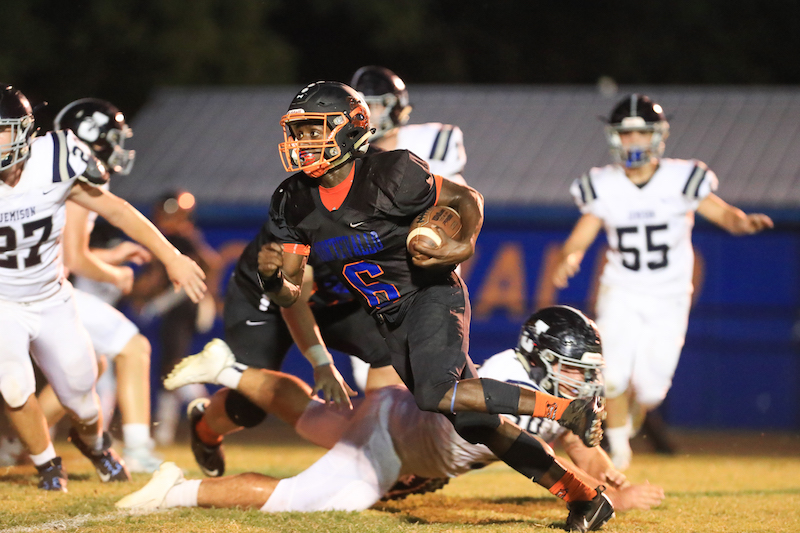 Montevallo running back Deon Gilliland had a strong night for the Bulldogs in a 62-50 victory over region foe West Blocton. (File)

The Tigers had a chance to tie or go ahead with just over a minute remaining, however a pass was intercepted by sophomore Tamardreon Purnell around the 2-yard line and returned all the way for the final score.

“I am proud of our defense find a way to make a play at the goal line. We didn’t make a lot of stops tonight, but when we needed to, we made a play,” head coach Brandon Wilcox said. “We try to have more points than they do at the end of the game, and we were fortunate to do that tonight.”

Neither team could stop the other on eight consecutive possessions to open the game. Sophomore running back Joseph Anderson rushed for four first-half touchdowns, while junior Caden Blake had two of four rushing touchdowns for the Tigers. West Blocton was able to convert one more 2-point conversion play than the Bulldogs for a 30-28 lead at halftime.

The Bulldogs regained the lead on the opening kickoff in the second half. Senior Deon Gilliland picked up the ball and returned it 65 yards for a touchdown. Anderson was able to convert a 2-point play for a 36-30 lead.

West Blocton responded with scoring drive of its own. Sophomore Austin Battles picked up the first of three second half rushing touchdowns. A 2-point run by senior Wesley Battles gave the Tigers a 38-36 lead with just more than seven minutes left in the quarter.

Gilliland answered on the first play of the ensuing Bulldog drive. A 51-yard touchdown run, with a 2-point conversion by Gilliland made it a 44-38 Bulldog lead.

Battles then hit back with a 56-yard touchdown run with just over three minutes left in the third quarter to tie the game at 44-44.

Gilliland picked up his third touchdown of the second half with 10 minutes remaining to give the Bulldogs a 50-44 lead.

Three minutes later Battles responded with his third touchdown of the second half to tie the game at 50-50.

Inabinette, who left the game early in the third quarter, returned to help guide the Bulldogs down the field and eventually found Carter on a 14-yard scoring pass. A failed 2-point conversion made it a 56-50 game with 3:30 left.

On the first play on the next drive, Battles raced 69 yards  down to the 3-yard line for West Blocton. Wrestling him out of bounds short of the goal line soon became key.

After three big stops inside the 5-yard line to force a fourth down, Purnell intercepted a pass intended for the end zone and returned the ball nearly 98 yards for the final score.

Inabinette finished the game 13-for-25 with 197 yards passing and a touchdown. Gilliland totaled 10 carries for 162 yards and two touchdowns on the ground, while also adding the 65-yard kickoff return for a touchdown.

In the receiving game, Carter finished with four receptions for 71 yards and a touchdown, while J.J. Evans had 87 yards on six receptions.

Montevallo improved to 4-2 on the season and will travel to Sumter Central while West Blocton drops to 2-5 and will host Dallas County in games next week.