Calera unable to pull off comeback against Selma 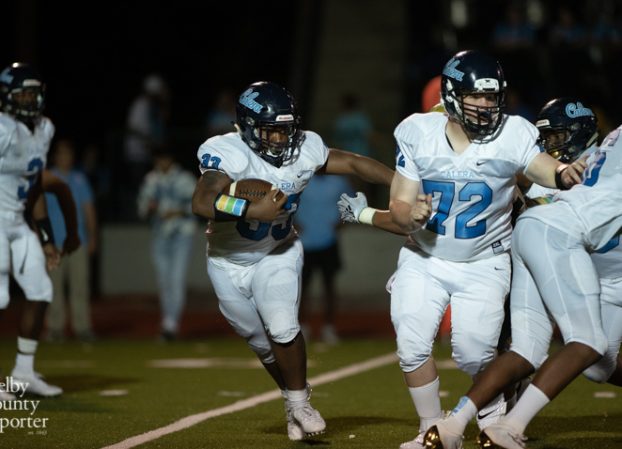 Calera was almost able to pull off a comeback against Selma on Friday, Oct. 4, but several turnovers were too costly. (File)

CALERA – Following a 14-14 tie with 6:46 left in the first half, the Selma Saints went on to score 24 unanswered points between the end of the half and the third quarter to create an insurmountable deficit for the Calera Eagles, who went on to drop their fifth straight game by a final score of 46-27 on Friday, Oct. 4.

The key sequence came shortly after the Eagles had taken their first lead of the game at 14-7.

Selma was able to pull even at 14-14 following a 1-yard touchdown run, and on their next two defensive series, the Saints forced and recovered two touchdowns.

Just before the half, the Saints had one more explosive play left in them thanks to a 34-yard touchdown pass to take a 32-14 lead into the halftime break.

After trailing 14-7 in the second quarter, the Saints were able to score 25 unanswered points in the final 6:19 of the half to completely swing the momentum in their favor at the break.

Coming out of the half, Selma quickly capitalized on another big turnover by the Eagles, who couldn’t afford any more mistakes. Following the interception, the Saints were able to convert a third turnover in the last four Calera possessions into a short touchdown run to take a 38-14 lead early in the third.

Finally, Calera was able to come away with an answer and end the hurt midway through the third quarter when quarterback Quindarius Crews found Dallas Toles for an 80-yard touchdown pass that cut Selma’s lead to 38-21.

Despite all of the offensive fireworks over the last two quarters, the game became relatively quiet after that.

Calera, however, was able to find one more big play with a touchdown shortly after that trimmed the Selma lead to 38-27 in the fourth quarter.

Needing a big defensive stop with five minutes to play, Calera was unable to get what it needed. On fourth-and-12 inside the Eagles’ territory, Selma not only converted the first down, but scored on a 31-yard touchdown strike to put the final nail in the coffin.

It was a valiant comeback attempt from Calera on homecoming, but the three turnovers between the second and third quarters were too much to overcome.

With the loss, the Eagles fell to 1-5 on the season and will now get set for three consecutive road matchups, including one at 5-1 Opelika on Friday, Oct. 11.