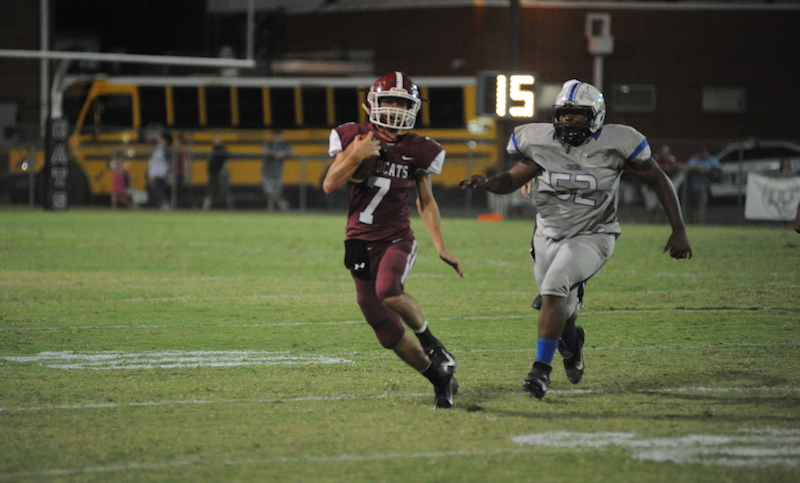 COLUMBIANA — The Demopolis Tigers held the Shelby County Wildcats to just one touchdown Friday night, Oct. 4, in a decisive 41-7 win for the Tigers.

Greg Oliver Jr. gave the Wildcats their lone score on a 4-yard rush in the second quarter.

“We played pretty good football in the first half, but we made a couple of mistakes that hurt us,” said Shelby County coach Heath Childers. “It could have been a lot closer. We didn’t execute some of our assignments properly. Defensively, we did a good job stopping their inside run game, but we did a terrible job protecting the edge of the defense.”

On the Wildcats’ next possession, Isaac Montgomery hauled in a 28-yard reception for a first down. Shelby County’s offense recovered a couple of fumbles and found themselves in position to put some points on the board, which Oliver did.

The Tigers were quick to answer Oliver’s touchdown, however, as Kyjuan Rhone crossed the goal line on a short run. Then, with 3:08 left in the second quarter, Jaqualon Smith put some icing on the cake with a 49-yard score.

Following Cole Wilson’s PAT, the score was 28-7 at the half.

In the third quarter, the points kept coming as Stevenson connected with Williams again for a 16-yard passing touchdown. Nichols found the end zone again on a 5-yard run, with 6:15 remaining in the third. The PAT was no good, but it wouldn’t make a difference.

“I was pleased with the overall effort, coming off of an off week,” Demopolis coach Brian Seymore said, adding, “I was impressed with the way his kids played. A lot of kudos go to those guys.”