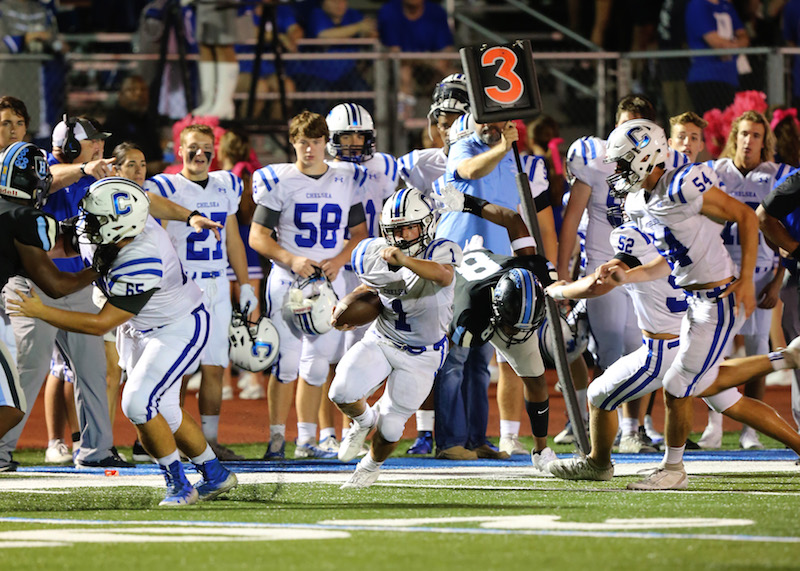 The Chelsea Hornets will host Homewood in a big region game this Friday night. (For the Reporter/Cari Dean)

Week seven couldn’t have been more thrilling thanks to Helena beating Chelsea in the final 40 seconds, Thompson taking down county foe Spain Park, Pelham and Vincent each picking up their first wins, Montevallo getting back on the winning path and Briarwood winning its fourth in a row.

But now we move on to week eight of the high school football season and with just three weeks of region play and four total weeks left, it’s getting tense for several teams with playoff spots on the line.

That should make week eight just as exciting with several big region matchups ahead, including three Thursday night games.

Chelsea vs. Homewood (Game of the Week)

Coming off a 31-28 loss to Helena, Chelsea has to bounce back in a hurry with a tough matchup at home against Homewood this week. Despite losing the top spot in the region and having their four-game winning streak snapped, the Hornets control their own destiny as far as finishing second in the region. With just two region games left against Homewood and Minor, winning both will be the difference in home field advantage in the first round of the playoffs.

This week, they’ll take on a 1-5 Homewood team, but it’s a Patriots squad that has taken on a tough schedule with most losses coming to ranked teams and two of them by four points or less. The good news is Homewood’s defense has struggled giving up 30 points per game, while the offense is scoring just 18.8 points per game. The Hornets’ offense looked to gain a ton of confidence in the loss to Helena thanks to a 300-yard passing day for quarterback Caleb Moore. If he and Michael Gibbs can continue to form a special connection, along with Collier Blair running the football, this team will get better moving forward because they have a solid and physical defense. Chelsea is the better of these two teams this season, it’s just a matter of not letting last week’s loss impact the team’s confidence. Chelsea 31, Homewood 24

Last year, aside from their two losses, this matchup was the closest for the Thompson Warriors in a 21-20 victory over the Rebels, and this year could be similar. It marks the first of two big region home games for the Warriors with matchups against the Rebels and Mountain Brook the next two weeks, who are a combined 11-1. What makes this matchup interesting is Thompson’s offense against Vestavia’s defense. The Rebels are currently giving up just 9.7 points per game and have yet to give up more than 16 this season, while the Warriors are averaging 48.5 points per game and have scored 40 or more in every game this season behind one of the state’s best offenses.

Early in the season, the Rebels’ offense scored 45 or more in their first three games, but have since struggled scoring seven, 17 and 19 the last three weeks. Vestavia’s defense is good enough to make this a game, but Thompson also has a good defense giving up 18.7 points per game. It’s hard to see the Rebels scoring a ton in this game, and while their defense is good, it won’t keep Thompson from putting up enough points to win. Thompson 28, Vestavia Hills 14

It’s always entertaining when the crosstown rivals meet, and this year could be an interesting one. While Spain Park is struggling defensively, the Jaguars have had a strong offense this year behind quarterback Harrison Barker. The Jags are averaging 30.7 points per game through a very difficult schedule and hung with No. 1 Thompson for three quarters last week. Hoover has also been dealing with injuries, specifically to starting quarterback Robby Ashford. Josh Lundy, however, returned from injury last week and played extremely well. Going up against a Spain Park defense giving up 41.2 points per game, it’s likely Hoover will light up the scoreboard again, but the Jags’ defense is getting better and the offense can always keep them in the game if they’re having a good night. Hoover 35, Spain Park 24

The Eagles are now 2-4 overall this season and 0-4 in region play after last week’s 42-14 loss to Mountain Brook, but this is a game primed for a bounce-back victory for Oak Mountain. Having lost this game last year 10-7, the Eagles want revenge this year on their home field and will be going up against a team sitting at 0-6 this season. The Wildcats are giving up 38.2 points per game and are scoring just 14 points per game. We’ve at least seen Oak Mountain win two games and they should be motivated in this one. Oak Mountain 28, Tuscaloosa County 21

This is a tricky spot for the Helena Huskies. Coming off their most emotional win in a while and now have a game against Carver who hasn’t played since last Thursday. If the Huskies can get over that big win and focus on this week, this game shouldn’t be close. Carver is just 1-5 this season and scoring just 24 points per game, while giving up 37 points per game. Helena on the other hand is scoring 35 a game and giving up 20.3. If the Huskies can win this game, they’ll have two matchups against Jackson-Olin and Pelham, who have a combined three wins, that will separate them from a region title. Helena 35, Carver-Birmingham 14

Despite struggles this season, both Pelham and Jackson-Olin enter this game off wins. The Panthers took down Carver last Thursday, while the Mustangs beat Jefferson Davis County (Mississippi) two weeks ago before a bye week. Both are very similar on paper, but Pelham’s offense has grown this year with Gabe Gamble and Xavier Lankford running hard. If they can protect the football and if Lankford can find a rhythm in the passing game, Pelham will win this game, but the defense has to also play well against a Jackson-Olin offense that has struggled. Pelham 31, Jackson-Olin 27

Sitting at 1-5 this season, it’s not going to get any easier this week for Calera thanks to a road matchup with one of the state’s best 6A teams. Opelika is currently 5-1 on the season with its only loss to 7A power Central-Phenix City. Calera’s inconsistency has been the difference this year, and it’s tough to see that changing against this opponent. Calera 17, Opelika 42

Following last week’s 48-16 victory over John Carroll, Briarwood has now won four games in a row to improve to 4-2 overall and 3-1 in region play. This week, the Lions get a Thursday night matchup with a Parker team that has looked good at times with its three losses to good teams. This is Briarwood’s toughest test since losing 26-14 to Pleasant Grove in the second week in the season, but the Lions’ defense has given up 16 or less the last three weeks in a row and 20 or less in all but one game this season, while the offense has started to find a rhythm behind freshman quarterback Christopher Vizzina as well as senior running back Luke Prewett. I think they’ll continue to score points against a defense giving up 30.7 per game, while their defense can make enough plays to make a difference. Briarwood 28, Parker 21

Last week, Montevallo was able to squeak out a 62-50 victory against West Blocton thanks to a late score and a big interception in the closing minutes. This week, the Bulldogs shouldn’t have to sweat one out quite as much against a 0-6 Sumter Central team. Giving up 43.7 and scoring just 11.7 points per game, the Jaguars have struggled and won’t be able to stop a Montevallo offense scoring 46.3 points per game. Montevallo 50, Sumter Central 20

Vincent was able to end its five-game losing streak last week with a 51-8 win over Central Coosa and will now have a chance to make it two in a row in region play against 1-5 Horseshoe Bend. The Generals are scoring just 10.3 points per game and giving up 31.5 points per game. While it won’t be as easy as a week ago, the Yellow Jackets should be primed for another win. Vincent 28, Horseshoe Bend 13

Evangel is coming off a dominant 80-35 win against ACSC rival Ezekiel and will get a second ACSC opponent in a row this week with a home matchup against Lighthouse Home School. Lighthouse is a team that sits at 6-2 on the season, but lost to that same Ezekiel team 58-46. The Warriors are 0-5 against the Lightning all time and are giving up 30 points per game, while this Evangel offense is scoring 47.1 points per game. Evangel 62, Lighthouse 30