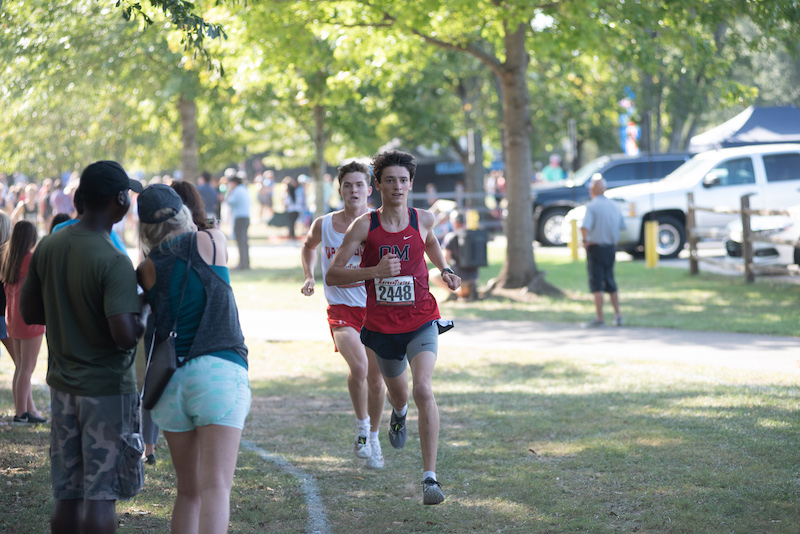 Oak Mountain’s Walker Cole, above, had the highest finish of any county runner at the 2019 Jesse Owens Invitational. (Reporter photo/Keith McCoy)

OAKVILLE – Walker Cole, Brady Barton, Trent Malloy and Jace Jones have been mentioned throughout the cross country season as four of the best runners with consistent finishes in the top 10, and in one of the biggest events of the season at the Jesse Owens Classic on Saturday, Oct. 5, all shined again thanks to finishes inside the top 15.

Also finishing in the top five was Helena’s Barton, who finished fifth with a new personal record time of 15:56.45, which marked his first sub-16 time as well. Barton now has four top five finishes this season for the Huskies and has yet to finish lower than seventh.

Jones ended up having his lowest finish of the season in the event, but that’s after two first place finishes to start the year. He finished the event 11th and still ran his second fastest time of the season clocking in at 16:07.38.

Those three were highlights out of 216 runners in the gold division, while a few others also had impressive performances, including Chelsea’s Miles Brush.

Brush set a new personal record in the event by finishing with a time of 16:30.99, which was good enough for 23rd in a strong field of athletes. He has now finished inside the top 25 in all six of his events this season, including three top 10 finishes.

Briarwood’s Malloy competed in the bronze division and took home seventh with a time of 16:45.45. That marked his third top 10 finish of the season.

Teammate Joseph Bell also had an impressive event, finishing 26th with a time of 17:16. 70. As a team, the Lions finished sixth in the overall standings of the bronze division.

There were also three other divisions in the event featuring runners.

In the green division, Westminster School at Oak Mountain had an impressive showing as a team.

The Knights had no finishers inside the top 50, but had five athletes finish between 53rd and 67th. Arjun Varadhan, Micah Adams, David Haskins, Alexander Montgomery and Ethan Ellerbusch were all part of the impressive effort that led to a sixth-place finish as a team.

Other teams participating in the event were Spain Park, Calera and Pelham.

The Jaguars competed in the silver division and were led by Max Smith in 32nd and Keith Warner in 37th in a race that featured 303 runners.

Pelham also competed in the silver division and got a finish of 82nd from senior Dominic Fanella with a time of 18:11.12.

In a deep race, Calera’s Riley Gay and Cade Galloway both had impressive showings as well. Gay finished in 132nd, while Galloway took home 151st. William Allen, Lane Busby and Michael Jones all finished inside the top 200 as well for the Eagles.