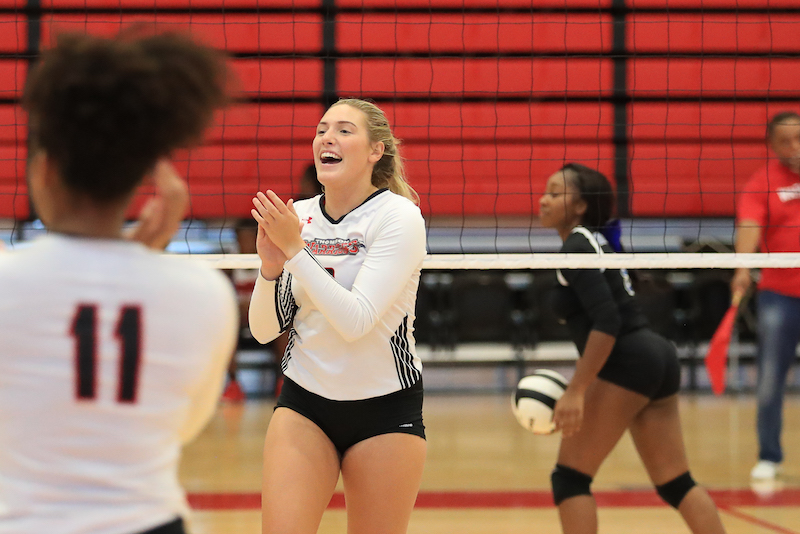 The Thompson Warriors took down Helena and Homewood in a tri-match on Tuesday, Oct. 9, while the Huskies were able to beat Homewood. (File)

HELENA – Two Shelby County squads proved the best in a volleyball tri-match between Helena, Thompson and Homewood, as the host Huskies fell to Thompson in two straight sets 25-23, 25-17 after defeating Homewood 23-25, 25-20, 15-10 in the early going on Tuesday, Oct 9.

Helena took the lead 11-10 in the first set and appeared in control up 23-18 later on, but the Patriots went on a furious 7-0 rally to steal the set including three kills and an ace to clinch.

The following period was even more tense as the teams were tied eight times, but the lead changed hands only once as the Huskies turned Homewood away at every attempt thereafter.

Brianna Wilson was dominant in the Huskies’ two wins adding up seven kills and five blocks in the match. At one point in the third set, Wilson racked up four points in a 5-0 run that sealed Helena’s comeback win. Maddie Rasmussen posted 11 assists, while Mia Johnson led the team with five digs. Eighth grader Madison Martin also got involved adding four kills and a block in her debut at the varsity level.

Thompson took on Homewood next and jumped out to a 15-4 lead after scoring the first five points never looking back. Bri Wilson was unstoppable from the left side with six kills and Sophie Bearden adding four.

Homewood, fearing elimination, came out with a better effort tying the second set 11 times with several leads. The Warriors front line, however, proved to be too much, as Wilson, Bearden, Kolbi Reed and Jada White combined for 13 kills and five blocks to finish off the Patriots.

Helena, well rested after their opening win, opened up a 7-3 lead to start the first set between the county foes to close out the night.

The Warriors countered by winning 13 of the next 19 points on the back of a couple of aces from libero Kinsleigh Sabo, three kills from White and two more from Reed. The teams battled to a tie at 20 each, but then Thompson’s Judy Green made her move.

After a kill from Wilson, Green inserted serving specialist Riley Parker into the game and her influence on the night can’t be understated. Parker put both Homewood and Helena in tough defensive spots during the evening and her ace gave the Warriors some much-needed breathing room at 23-20 before two more kills from Sophie Bearden finished the set.

“I think right now she’s been the server that we’ve scored multiple points in a row with her in the service spot,” Green said. “She just serves such a low, flat, hard ball it gets on passers quicker than some of our other servers. Several times when the other teams called timeouts Riley was the server.”

The Warriors took a 4-1 lead to open the second set and did a good job keeping the Huskies at a healthy distance with the home crowd looking for any opportunity to get fired up.

Bearden was big again in the first half of the set with four kills and a block to give Thompson a 15-7 lead. Helena drew to within four at 16-12, but got no closer, as Reed, White and even setter Kelsey Tangle added kills to preserve the lead.

Tangle and White’s connection at the net was noticeable and it makes the Warriors even more dangerous as the postseason approaches.

“We continue to work with our middles and our setter every day,” Green said. “We’ve been trying to put a few new wrinkles into our offense, we’re just trying to add a few things. Jada is just a really dynamic athlete and she’s super fast and quick. She’s got the ability to move around and hit in front of the setter or behind the setter because she is left handed. It’s odd to see a left-handed hitter, it’s not a common thing. And I think we keep trying to learn about the angles of how she can approach to be successful to attack.”

White ended the night with 11 kills and five blocks to lead the team while Sophie Bearden totaled 13 and four, respectively. Bri Wilson was everywhere piling up 12 Kills, 13 Digs, three assists and two blocks.

Reed led the team with 14 kills, 16 digs, two blocks and alos stood out on defense.

“I was really proud of the way she adjusted throughout the night,” Green said. “She reeled it back when she had to and had one of her best defensive games of the year.”

Tangle set the offense up all night and finished with 48 assists, three kills, five digs and a block. Sabo had 15 digs and led the team with four aces. Emma Huner added 10 digs and three aces. Johnson led Helena with five kills versus Thompson, while Mackensie Sipper held the team lead with nine digs. Rasmussen again led the team with 10 assists.