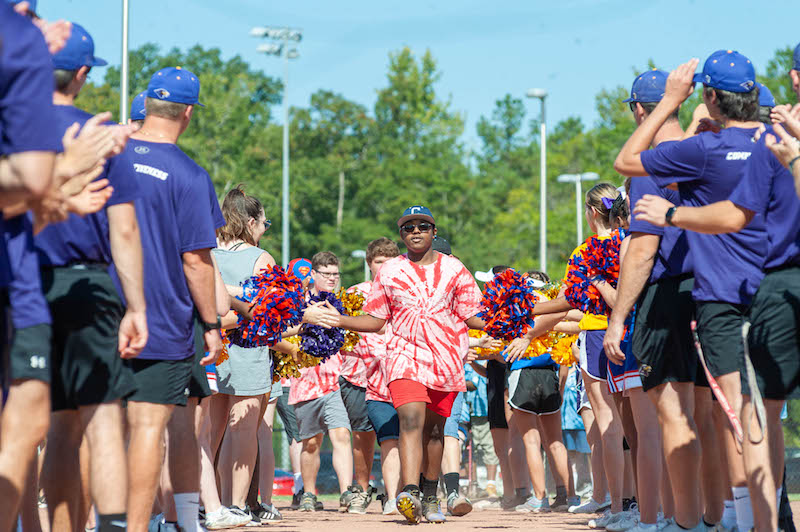 Calera’s Field of Angels league had plenty of purple and gold on-hand during its season finale on Saturday, Sept. 21, as multiple groups of University of Montevallo students helped to ensure the day was memorable.

The UM baseball and spirit teams joined Freddie the Falcon at the Eagle Sports Complex for closing day of the 2019 season of Field of Angels, which is a baseball league for children and adults with disabilities.

“Having the University of Montevallo involved with Field of Angels is so special for everyone involved. The UM spirit teams, Freddie the Falcon and the UM baseball team created such an exciting atmosphere for the parents and players,” said UM Spirit Squad coordinator Melissa Stano. “It means the world to me and my family, as my son Creed plays in the league and now has so many great UM students to look up to. We are so grateful to be a part of the Montevallo family and it means so much to share our UM community with the entire Field of Angels baseball league.”

Throughout the morning, the UM baseball players partnered with the Field of Angels participants to help with everything from batting form to stopping balls hit into the outfield. As each Field of Angels athlete rounded the bases following a hit, they were met with cheers and applause from the UM spirit teams. Participants also enjoyed meeting and taking pictures with Freddie.

“Since 2011 we’ve been helping with Field of Angels and it’s an amazing organization! Our players really enjoy helping the kids, doing the announcing for the games and especially getting to play some ball with them,” said UM head baseball coach Chandler Rose. “We have guys that were here 10 years ago that still talk about Field of Angels and how much an impact it had on them. Our players get just as much from the kids as we do from them. It’s so great what Field of Angels is doing for our community and I’m thankful that we can be a small part of that.”