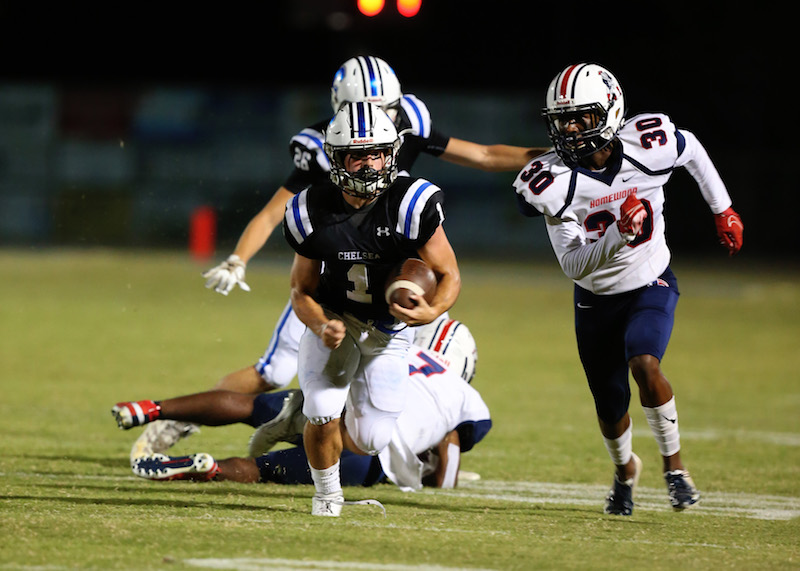 Chelsea running back Collier Blair neared 200 rushing yards against Homewood, but it wasn't enough in a one-point loss. (For the Reporter/Cari Dean)

CHELSEA – For the second straight week, the Chelsea Hornets walked off the field heartbroken after falling to Homewood 27-26 on Friday, Oct. 11, for their second loss in a row by three points or less.

The Hornets, who lost on a field goal with 34 seconds left to Helena a week ago, were slow out of the gate in the game and trailed 14-0 early on, but ended up battling back on several occasions to cut into the lead. But ultimately, the Patriots were able to limit Chelsea to several field goal attempts instead of touchdowns, which made the difference in the final score.

“That’s frustrating to lose like that two weeks in a row,” Chelsea head coach Dustin Goodwin said. “But at the same time, we have to make the plays on both sides of the ball.”

Homewood got the game started with an opening-drive touchdown behind a quick six-play drive that went 63 yards and was capped off by a 3-yard touchdown run from quarterback Pate Owen to put the Patriots on top 7-0 less than two minutes into the game.

Chelsea took the ball to midfield on the ensuing drive, but ultimately turned the ball over on downs after going for it on fourth-and-1.

Homewood took advantage of the good field position it was gifted and reeled off several chunk plays in a row, including a 28-yard pass and 13-yard run, before Sam Carr ran in a 6-yard touchdown to extend the Patriots’ lead to 14-0 in the first six minutes of the game.

“Getting off to that slow start ended up hurting us in the end,” Goodwin said after the game.

The Hornets, however, quickly hopped on the Collier Blair train. The junior running back had another special night and it started on Chelsea’s second drive of the game where he picked up two quick runs of 12 and 19 yards to start a successful drive.

Chelsea went on to convert one fourth-and-2 on the drive and then on third-and-10 from the Homewood 11, Blair capped off the special drive with an 11-yard touchdown run that saw him break three tackles.

“We knew coming into the season he was going to be a guy we were going to lean on real heavy and he’s continued to perform week in and week out,” Goodwin said.

Following a fumbled snap on the extra point, the Hornets trailed 14-6 with 1:31 left in the opening quarter.

Early in the second quarter, the Hornets made it 13 unanswered points thanks to strong play from Michael Gibbs. Quarterback Caleb Moore hit Gibbs for a 13-yard pass, then Gibbs ran for 4 yards twice with the second being a touchdown run to cut the deficit to 14-13.

Both teams buckled down defensively for a while after that, including a fumble from Chelsea at midfield with 4:17 remaining in the half.

For the second time in the game, the Patriots made the Hornets pay for a turnover at midfield by marching right down the field to take a 20-13 lead behind another 3-yard touchdown run from Owen.

Chelsea’s Cooper Neal was able to tack on 42-yard field goal with three seconds left in the half to make it 20-16 at the break.

It took a while for the action to get going in the second half as the game saw back-to-back three-and-outs and then a missed 36-yard field goal by Chelsea.

Homewood, however, broke that streak on its next possession when Owen hit Len Irvine for a 69-yard pass that saw Irvine beat two Chelsea defenders for the touchdown and a 27-16 Homewood lead with 4:23 to play in the third quarter.

Chelsea’s offense started feeding Blair again on the ensuing drive and it paid off. The running back put together runs of 4, 13, 4, 5, 1 and 5 yards on the drive before Moore connected with Adam Reaves for a 25-yard touchdown pass to cut the deficit to 27-23 heading to the final quarter of play.

That seemed to turn the momentum back into Chelsea’s favor, which led to a strong defensive showing on Homewood’s next drive.

The Hornets got the ball back at the Homewood 47-yard line shortly after and Blair ran the ball on four of the first five plays of the ensuing drive. Chelsea, however, was forced into a fourth-and-5 at the Homewood 15, as Neal came in and hit his second field goal of the night, this time from 30 yards out to bring the Hornets within one point with 8:28 to play.

The Hornets stepped up defensively and forced a punt on the next Patriots’ drive, but Chelsea eventually failed to get a fourth-and- 2 from the Homewood 49 on its next drive after Reaves slipped in the backfield running the wildcat on the wet field from a slight rain.

Chelsea forced another three-and-out and got one more chance, but with just 35 seconds left, the Homewood defense stepped up to preserve the 27-26 win.

Chelsea fell to 3-4 overall officially with their forfeit to Briarwood earlier this week, or 4-3 without that forfeit, while also falling to 3-2 in region play.

The Hornets will now take on Minor next week in a game that has plenty of implications for playoff seeding and home field advantage in the first round of the playoffs.

“We’re trying to play for a seed in the playoffs right now,” Goodwin said of what’s ahead. “We’ll see how they respond next week and hopefully they’ll have a good week of practice and respond in a positive way.”