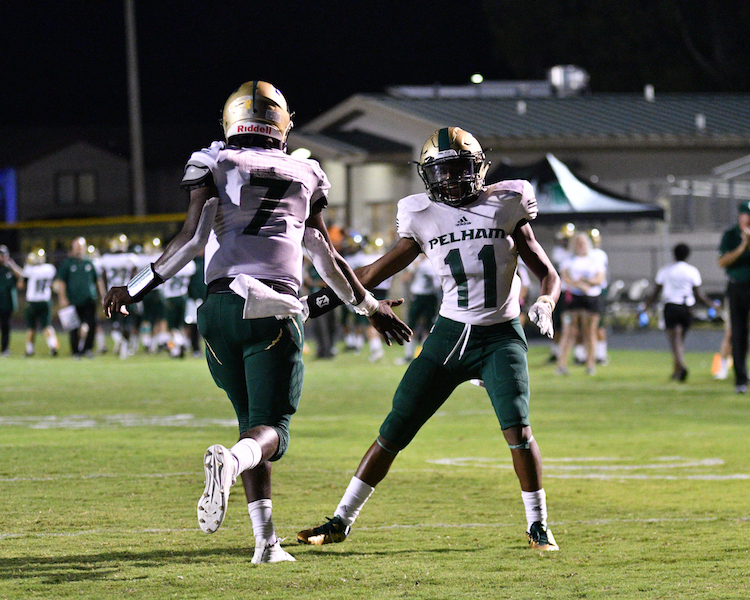 The Pelham Panthers won their second consecutive game on Thursday, Oct. 10, by taking down region foe Jackson-Olin. (For the Reporter/Jeremy Raines)

By JEREMY RAINES | Special to the Reporter

BIRMINGHAM – The Pelham Panthers built off of their first win of the season a week ago by following it up with a second win in a row on Thursday, Oct. 10, behind strong performances from quarterback Xavier Lankford and running back Gabe Gamble in a 38-7 road victory over region foe Jackson-Olin.

In a big region matchup with the Panthers hoping to salvage hopes of a playoff spot at the end of the season, the Panthers made a statement early setting the tone of the game on the very first play as Pelham defender Cody Ferguson picked off the Mustangs’ quarterback taking it to the house for a quick lead.

Jackson-Olin responded, though, as a big kick return set up a great drive from the Mustangs capped-off by rushing touchdown from sophomore Kason Jones to tie the game 7-7 with 10:59 left in the first quarter.

It looked as if the game was set up for a back-and-forth affair at that point, but only one team was able to continue that offensive momentum the remainder of the game.

Jumping ahead to the second quarter, with 10:45 left in the first half, Pelham tacked on another touchdown, this time through the legs of Gabe Gamble who pushed his way into the end zone dragging Mustang defenders with him. The PAT hit the uprights, but the score put the Panthers back on top 13-7.

Tough defense by Pelham forced Jackson-Olin to punt on its next drive. A short punt then set the Panthers up with great field position.

Pelham put together another great drive that resulted in a touchdown run from Lankford to extend the Panthers’ lead to 20-7 after a successful PAT with 8:17 left in the half.

Less than two minutes later, Lankford found some more magic in a connection with Christian Pritchett across the middle for a nice touchdown pass and catch extending the already large lead to 27-7 after another successful PAT.

Jackson-Olin failed to get much offensive production going after their first drive, and the growing Panthers’ lead seemed to dampen the Mustangs’ opportunity to get back into the game.

Pelham was able to add a field goal from Salvador Jimenez to close out the half, which put the Panthers on top 30-7 at the break.

They quickly extended that lead early in the second half when Lankford added another touchdown run with three minutes remaining in the third quarter to put the Panthers on top 36-7.

Many younger players got plenty of important playing time toward the end of the game. Not to be outdone by the starting defensive unit, the backups set out to prove a point of their own as they forced the Mustangs to a safety with just 2:46 left in the game, which became the final points scored in the game, as the Panthers went on to win big 38-7 over the Mustangs.

After the game, head coach Tom Causey said that he was really proud of the way his guys prepared over the last couple of weeks and that he felt like this was the first game his team had played all four quarters. He also noted that he was happy to see a lot of his younger guys get important playing time that would be critical for the remainder of the season.

Lankford finished with a big night with 14 rushes for 63 yards and two touchdowns, while throwing for 228 yards on 11 passes with another touchdown through the air.

Gamble also had a huge night rushing for 196 yards on 27 carries and two touchdowns of his own. Christian Pritchett had six catches for 132 yards and a touchdown reception to round out the offensive leaders on the nights.

Defensively, the Panthers were stingy all night preventing the Mustangs from getting much production at all, offensively. Matthew Plummer led the Panthers with four tackles on the night, while Kody Ferguson got the game started with his interception.

The Panthers look keep the momentum rolling into next week as they travel to Tuscaloosa to battle the win-less Northridge Jaguars in a non-conference match-up, while the Mustangs host the region-leading Helena Huskies. The Panthers improve to 2-6, and the Mustangs fall to 2-5.