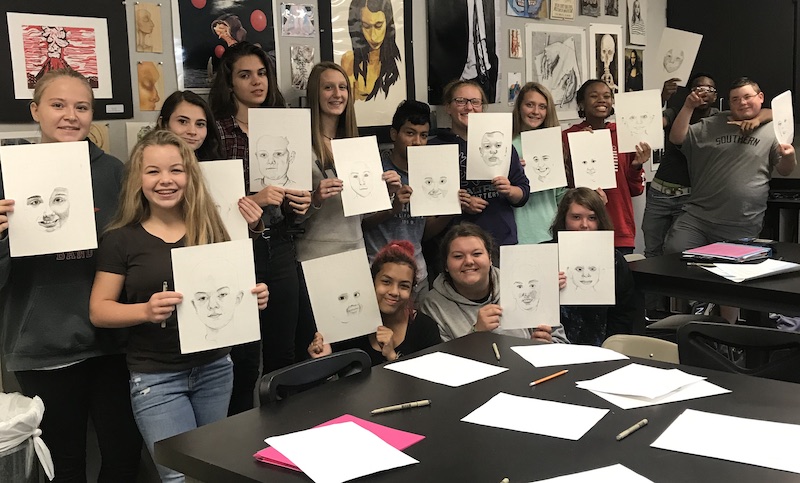 Michelle Branson's Art II students give a sneak peek of the portraits they have begun working on for Russian children. (Contributed)

Since 2016, a select few of Michelle Branson’s art students at Shelby County High School have been able to participate in an opportunity called The Memory Project.

The Memory Project was started by a man named Ben Shumaker in 2004 after he spent a month in Guatemala with orphans that had very few personal belongings or ties to their own history.

He came back to the states and organized a movement that would allow art students to create portraits for children all over the world that would not only be a special item for them to keep but would also build feelings of goodwill between countries as the project grew.

Branson explained how she brought the program to SCHS.

“I just happened across The Memory Project during my first year teaching at the high school,” Branson said. “Once you read what they are about you can’t not do it. I’ll do it every year I teach a high school class. It’s magical and uplifting and the kids adore doing it even though it’s one of the hardest projects of the year.”

Since 2016, SCHS students have created portraits for children who have suffered war, violence and loss of family, in Romania, Tanzania, Syria and, this year, orphans in the USSR.
The project requires funding, however. That’s where State Rep. Corley Ellis comes into the story.

After receiving an email from the school principal last spring that contained a link about last year’s participation, he knew he wanted to be involved and decided to sponsor this year’s project.

“The smiles on the faces of the Syrian children when they received the portraits our students drew was priceless,” he said. “What a wonderful outreach that makes this world a little bit smaller and a whole lot brighter.”

The students have just begun work on this year’s portraits.

They will be working on them throughout the year and then ship them out to The Memory Project for distribution in the spring.

The students shared some of their thoughts about being involved in the work for this project.
Junior Mary Moore is working on The Memory Project for a second year now.

“It seems like a good thing to do, and I want to do my best work on it,” she said. “These kids don’t have a lot of belongings. We have lots of pictures of ourselves, but this may be their first or only one.”
Sophomore Paisley Barrow is doing her first portrait this year.

“It gives us a way to give through our service rather than money since we are young. We live in a small town and obviously can’t serve in person, but we can do this and it matters,” she said.
Madison Smith is also a sophomore. “It’s stressful in some ways because you know it might be one of the only things they get to have of their own, so you really want them to like it. It inspires me to do my best work.”

If you would like to learn more about The Memory Project, go to Memoryproject.org to see past portrait projects and other programs they have recently started for elementary schools.