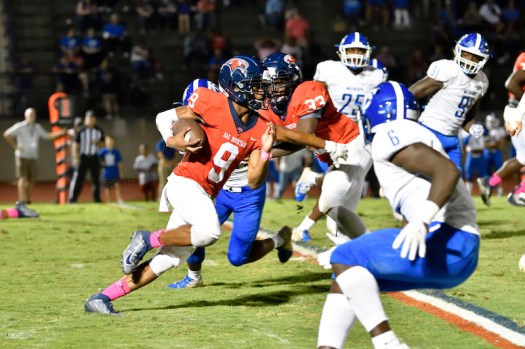 Oak Mountain quarterback Evan Smith (9) ran for two scores and threw for one as he finished with 180 yards rushing in the Eagles 53-32 win over Tuscaloosa County on Friday, Oct. 11. (For the Reporter/Barry Clemmons) 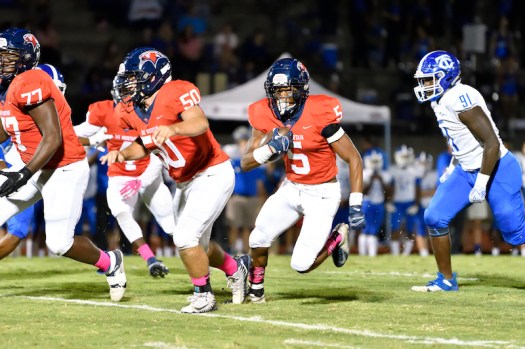 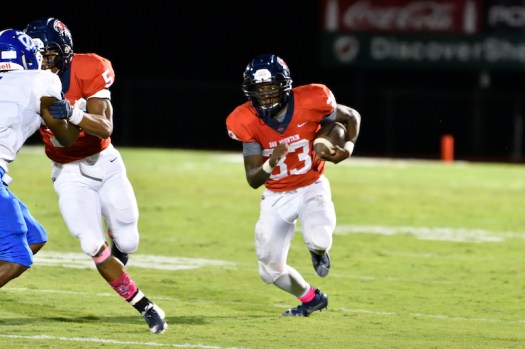 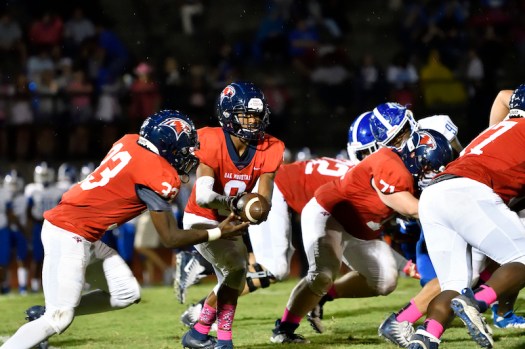 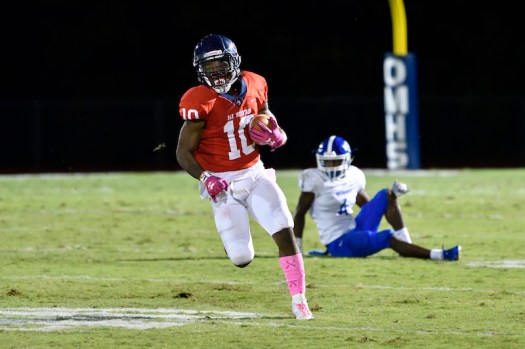 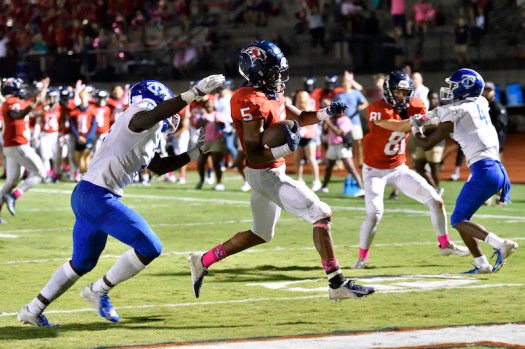 NORTH SHELBY – A combined 41 fourth quarter points and a three touchdown night from Oak Mountain quarterback Evan Smith highlighted an entertaining game between the Eagles and the Tuscaloosa County Wildcats as Oak Mountain pulled away for the 53-32 win at Heardmont Park on Friday, Oct. 11.

The win marked Oak Mountain’s first region win of the season as the Eagles racked up 432 total yards of offense with 389 of those yards coming on the ground on 57 rushing attempts.

It was Tuscaloosa County who got off to a quick start with some trickeration as Wildcats’ quarterback Connor White hit Cedric Williams off a flea flicker on the first play of the game for a 75-yard gain to the Oak Mountain 2-yard line.

The next play, Tuscaloosa County’s Triquavion Jones punched it in from two yards out to give the Wildcats a quick 7-0 lead.

Oak Mountain would fumble on its first offensive possession but late in the quarter, the Eagles cut the lead to 7-3 on a Hogan Morton 29-yard field goal.

Oak Mountain’s longest play from scrimmage came early in the second quarter as Smith found some running room on the right side and raced for an 80-yard touchdown to give the Eagles their first lead of the game 10-7. Smith finished the game with 180 yards rushing on 15 attempts, amounting to 12 yards per carry.

“It’s the best game he’s played by far at quarterback and he and I sat down Monday and just really evaluated his play and looked at film, and looked at him and looked at just some old clips of us,” Oak Mountain head coach Cris Bell said of Smith. “Just seeing him see plays being made, and he did a much better job of reading the defense tonight, particularly in the run game. We ask our quarterbacks to do an awful lot in the run game, along with reading the defense, and he did tonight and made huge strides.”

Tuscaloosa County would respond on its next offensive possession following the Eagles score with a 72-yard drive capped off by a 6-yard touchdown run by running back Damien Taylor. The 2-point conversion was no good as the Wildcats took a 13-10 lead into halftime. Taylor was a workhorse all night for Tuscaloosa County as he finished with 23 rushes for 182 yards and three touchdowns.

The second half, and more specifically the fourth quarter, was where things got wild for both teams.

To open the third quarter, Oak Mountain methodically drove down the field milking 5:25 off the clock as Smith ran in his second touchdown of the night from eight yards out. This gave the Eagles a 17-13 lead with 6:35 to go in the third quarter.

On Tuscaloosa County’s first drive of the second half, a successful fake punt call kept a drive alive that led to a touchdown.

Facing a fourth-and-4, the Wildcats elected to do a jump pass on a fake punt that was good for a first down at the Oak Mountain 46-yard line.

A few plays later, Taylor ran it in from 38 yards out to put Tuscaloosa County back on top 20-17.

Now trailing late in the third quarter, Smith converted a third-and-3 with his legs to keep a drive alive and followed it with a 27-yard gain to the Tuscaloosa County 13-yard line following a late hit penalty.

The Eagles finished off the drive with a one yard touchdown run by Jonathan Bennett as Oak Mountain regained the lead 24-20 to end the third quarter.

With 12 minutes to play, it was as if both teams found their strides offensively as three lead changes and a tie highlighted the final quarter.

Striking first was Tuscaloosa County less than a minute into the fourth quarter on a 9-yard touchdown run by Taylor. The point after was no good as the Wildcats regained a 26-24 lead.

For Oak Mountain, arguably one of the biggest plays of the game came through the air on its first drive of the fourth quarter.

After driving the ball to the Tuscaloosa County 30-yard line, the Eagles drive stalled as they faced a fourth-and-7 down by two.

Oak Mountain elected to go for it, as Smith rolled out to his right and slung a pass to the back of the end zone where wide receiver Zach Paisley made an outstanding grab for the incredible 29-yard touchdown. A two-point conversion pass from Smith to Harrison Miller gave Oak Mountain a 32-26 lead with 9:16 to play.

Just like previous possessions, Tuscaloosa County would not go away however, as Taylor ripped off multiple big runs down to the one yard line of Oak Mountain.

Tuscaloosa County’s Haseem Brown would score from a yard out as the game became tied 32-32 following a missed extra point by the Wildcats.

This would be as close as the Wildcats would get, as Oak Mountain would go on to score 21 unanswered points, get timely stops on defense and have two big kickoff returns from Devin Holden to pull away late in the fourth quarter.

Following a one yard score by Oak Mountain’s Judah Tait to make it 39-32 Eagles, the Wildcats were finally stopped on offense.

A few plays later, Bennett ran it in from 10-yards out for his second score of the night with 2:55 to go to give the Eagles a 46-32 lead where they iced the game.

The exclamation point came on an interception by Oak Mountain’s Chase Schwender with 2:02 to play to lead to the final 3-yard touchdown run by Tyler Do-Bui to make it 53-32.

The win by Oak Mountain improved the Eagles record to 3-4 overall and 1-4 in region play. They will travel to meet Spain Park in another region game on Oct. 18.