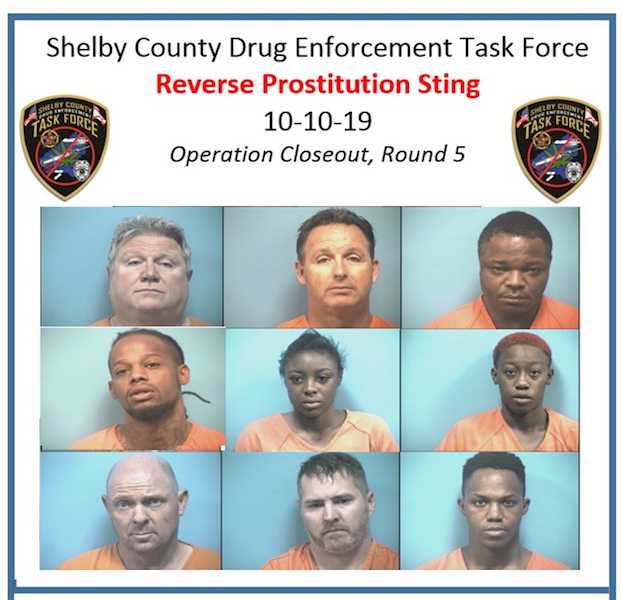 The Shelby County Sheriff's Office arrested 11 men and women as part of round 5 of the "Operation Close Out" undercover reverse prostitution sting on Oct. 10. (Contributed)

COLUMBIANA – On Thursday, Oct. 10, the Shelby County Drug Enforcement Task Force, in partnership with the Hoover Police Department, concluded a yearlong undercover reverse prostitution sting, titled “Operation Close Out,” that resulted in the arrests of 11 men and women, according to a release from the Shelby County Sheriff’s Office.

The Oct. 10 operation was carried out in North Shelby County in the Riverchase area.

According to their arrest warrants, the individuals “Agreed to engage in sexual intercourse, sodomy or sexual contact with another person in the act for monetary consideration” after the defendants showed up at a meeting place and met with an undercover agent in response to an online ad.

“The purpose of these operations is to aggressively pursue patrons of the sex-trafficking industry, which is directly connected to human trafficking,” Shelby County Drug Enforcement Task Force Commander Clay Hammac said.

The release read that “furthermore, law enforcement wishes to demonstrate a zero tolerance for criminal solicitation and to aggressively attack the demand for these type enterprises.”

Two of the 11 names from the investigation are being withheld because of an Alabama law prohibiting the publication of mugshots where women are exploited as prostitutes. The names released are individuals charged with solicitation or promoting prostitution.

The following individuals were arrested in the Oct. 10 operation: