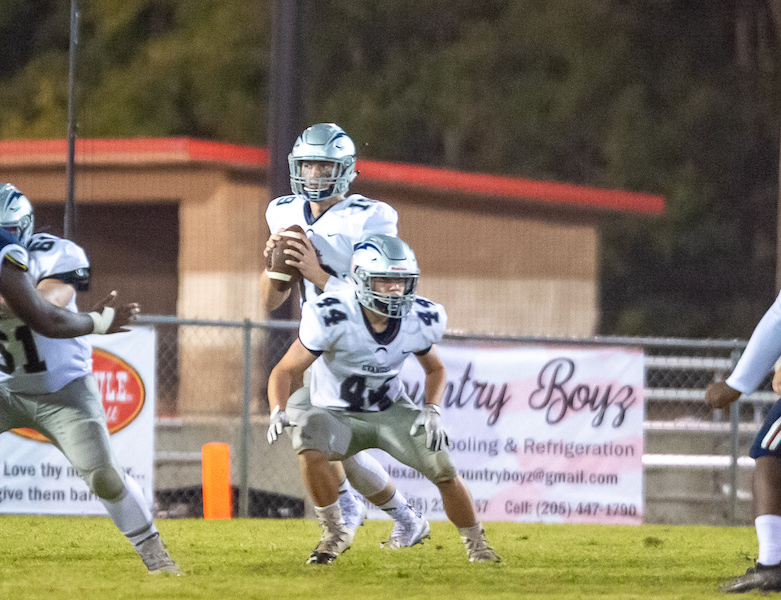 The Evangel Lightning closed out ACSC play with a 58-20 victory over Lighthouse Homeschool and will now host the ACSC State Championship game. (For the Reporter/Larry Dancy)

ALABASTER – A 36-point second quarter proved to be the difference Friday night, Oct. 11, as Evangel Christian School pulled away from Lighthouse HomeSchool, 58-20, to run the table in 8-man football this season. The win clinches a spot for ECS in its seventh-straight 8-man state championship game on Nov. 1.

“We talk about being the best team we can be and we wanted to host the state championship again for the third year in a row at our place. We protect that ground,” said ECS head coach Tim Smith. “It’s a good conference win. I think we get better every week.”

Evangel drove down field to open the game, but failed to score once inside the red zone. Lighthouse took the first lead, 8-0 on a 17-yard touchdown run by Preston Graham and a 2-point conversion.

Noah Shears answered for Evangel, scoring on a 45-yard touchdown run. Tyler Henderson connected with Jett Lodge on a 2-point try to tie the game, 8-8.

Henderson also rushed for 60 yards and two touchdowns on six carries, and he caught a 15-yard pass from Lodge, who caught two passes for 83 yards. Ferrell finished with 93 yards on five receptions.

After taking a 44-8 lead into halftime, Smith pulled his starters and added two more touchdowns from backup quarterback Eli Whitfield.

Defensively, Will Parker led the team with nine tackles, two sacks and a fumble recovery. Daniel Viles, Zach Rickles and Jahmad Quillman each had fumble recoveries. Quillman scooped and carried his in for a touchdown in the second quarter.

ECS (7-2) will close out its regular season on Friday, Oct. 18 against Morgan Academy at Ricky M. Cairns Field in Calera. It will serve as homecoming and senior night for more than a dozen seniors.