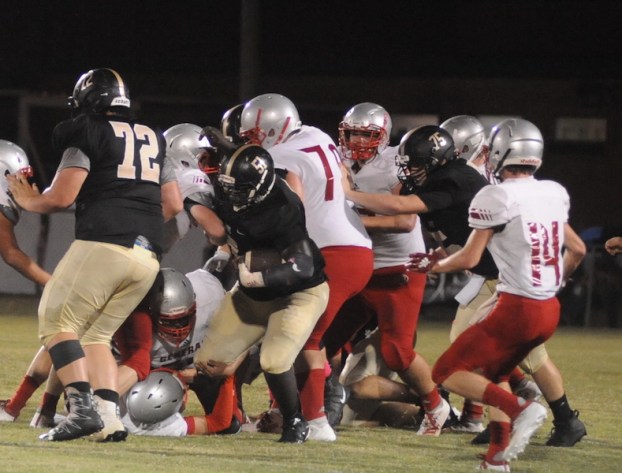 VINCENT — The Vincent Yellow Jackets earned their second win of the season in a hard-fought matchup Friday night, Oct. 11, against the Horseshoe Bend Generals, coming out on top 43-24.

As a light mist turned into a drizzle, it looked like the Generals might mount a comeback early in the fourth quarter, but as the rain fizzled out so did their chances for victory.

“I’m proud for us getting the win,” said Vincent head coach Lucas Weatherford. “We didn’t necessarily finish the game the way I thought we should have, but that’s a credit to Horseshoe Bend.”

Weatherford said he wants to use the positive momentum from the team’s two wins to focus on finishing games as the latter part of the season approaches.

Vincent’s J.T. Youngblood scored the first touchdown of the night on a 25-yard run in the first quarter. Running back Tae McGregor capped the score with a 2-point conversion, making the score 8-0 early on.

The Generals were quick to answer with an 8-point drive of their own, tying it up by the end of the quarter.

The second quarter was all Vincent as quarterback Will Harris completed two passing touchdowns to McGregor, from 17 and 22 yards out. The first conversion was good for another 2 points, but the second came up short.

Not much happened in the third quarter, as the rain started to sprinkle, but all that changed as McGregor got hold of the ball to start the fourth, blowing past the General defense for an 85-yard touchdown run.

McGregor’s run must have sparked something in the Horseshoe Bend offense, as they answered with a touchdown and a 2-point conversion, making the score 29-16. But just as sideline chatter turned toward a potential comeback, Vincent pulled away once again as Harris and McGregor teamed up for another 6 points, this time from 52 yards.

McGregor hit paydirt yet again with 2:55 remaining in the game, gaining 33 yards in the process.

Aided by a healthy kickoff return, Horseshoe Bend showed they were not ready to give up as they crossed the goal line one more time, but it proved too little too late. A 2-point conversion resulted in the final score of 43-24 Jackets.

Vincent will now travel to Reeltown looking to make it three games in a row on Friday, Oct. 18.