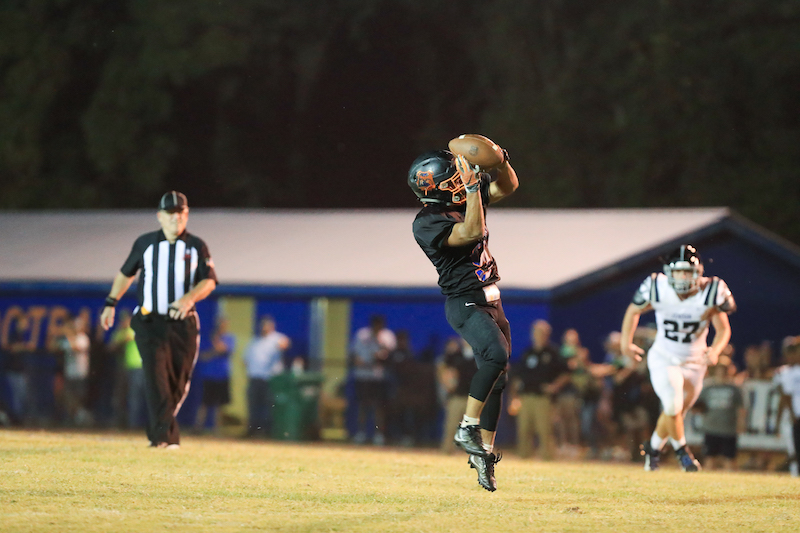 The Montevallo Bulldogs couldn't overcome an injury to quarterback Malik Inabinette in a 14-12 loss to Sumter Central on Friday, Oct. 11. (File)

YORK – The Montevallo Bulldogs offense was held in check as they dropped a 14-12 setback at Sumter Central in a region game on Friday, Oct. 11.

All three of the Bulldogs losses have come on the road, as they drop to 4-3 on the season and 2-2 in Class 4A, Region 3 play.

Inclimate weather was a factor, as the game was delayed for almost 45 minutes due to a lightning delay, which caused the Bulldogs to sit and wait on the team bus. When play resumed, the Bulldogs managed to score a pair of first quarter touchdowns for a 12-8 lead, but a key injury soon limited their offensive ability.

The Bulldogs defense forced a turnover and recovered an onside kick after one score, however, they were unable to capitalize due to penalties and the field conditions.

A second touchdown gave the Jaguars a 14-12 lead at halftime, but the big news was an injury to Bulldogs’ senior quarterback Malik Inabinette, who didn’t return to the game in the second half.

In the second half, Montevallo’s defense, which has struggled for the majority of the year, was able to step up and hold Sumter scoreless.

But with Inabinette out of the game, Montevallo’s offense struggled to gain any traction.
Senior receiver J.J. Evans, the team’s best receiver, was forced to take over for Inabinette.

He had a solid half, and late in the fourth quarter, Evans managed to connect with fellow senior Jamarius Carter for a 43-yard touchdown pass, however the scoring play was negated thanks to a holding penalty.

Unable to score, Montevallo punted the ball back to the Jaguars.

Sumter then faced third-and-25 on late in the final quarter, but an odd play ended in a 30-yard first down run by the center to cement the 14-12 victory for the Jaguars.

Inabinette finished the game 5-for-8 with 99 yards and a touchdown in the first half. Running back Deon Gilliland posted 104 yards on 19 carries, while Joseph Anderson totaled 50 yards on 11 carries, including Montevallo’s first touchdown.

Evans finished with 89 receiving yards on four receptions, while Carter posted the lone 10-yard touchdown catch. Jamari Harris and Jamion Prentice both had fumble recoveries for the defense, while Orlandis Weeks and KamRon Goins each posted eight tackles.

The Bulldogs fell to 4-3 overall with the loss and are now 2-2 in region play. They will host Sipsey Valley for their final home game of the regular season on Friday, Oct. 18, still trying to battle for a top-two seed in the region for home field advantage in the opening round of the playoffs.