2019 ArtSTALK to ‘surprise and delight’ festivalgoers 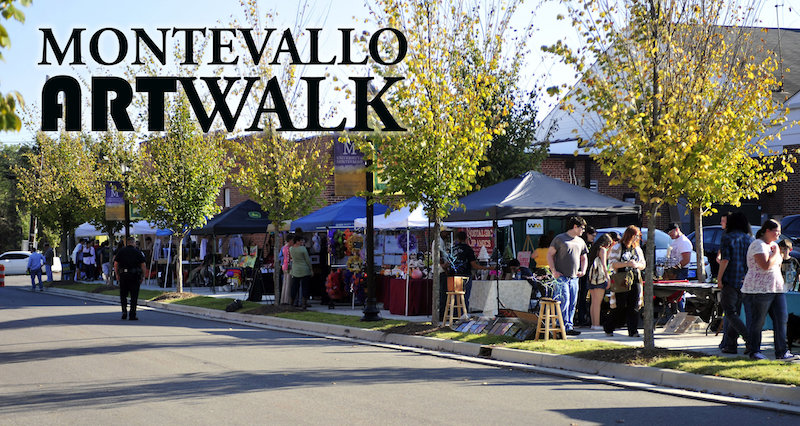 MONTEVALLO – New artists, makers, performers and activities are in the lineup for Montevallo Artwalk’s 2019 ArtSTALK event on Saturday, Oct. 26.

This year’s motto, “To surprise and delight,” represents the addition of the new components to the existing ones that fans of ArtSTALK have grown to appreciate over the years.

“We want to provide a buffet of new tastes alongside favorites for our guests,” Montevallo Artwalk Coordinator Emily Gill said. “At ArtSTALK, you will find new sights, sounds and experiences to delight as well as your returning favorites to revisit and enjoy.”

Gill said the motto came from her experiences at an international performance design exhibition this summer in Prague, Czech Republic, she attended as part of her professional development and research as a Live Performance Designer.

“A major part of that exhibition was a massive series of public free performances, and while the exhibition attendees had schedules and could plan their viewing day, the locals of Prague would happen upon a group of us in their usual park walk, or work commute, and I was as entranced by their reactions to coming upon surprise art in their daily life as by my deliberate attendance,” she said. “I mean, I chose to trek deep into a park to watch somebody roll around in a field in a spandex sack with some exercise balls. The lady with her stroller and toddler came upon it completely by surprise! To me, it was an ontological exploration of space and movement. To the child, it was a magical creature springing up in daily life.”

Gill started thinking about how this concept of surprises in everyday life could be applied in Montevallo.

When she returned home, she posed the idea to the Artwalk planning committee, and the motto “To surprise and delight” took shape.

This year’s event will start at 1 p.m. with an opening ceremony by DRUM the Program featuring West African dancing and music that will be at one end of the booth route in front of the Career Center of Montevallo High School, sponsored by the President’s Office of the University of Montevallo.

Attendees can make their way down the route and stop off at the Kids Korner sponsored by AmStar Cinemas Alabaster, Montevallo Chamber of Commerce, Lucky’s Foodland and Pic N Save Montevallo to decorate pumpkins and play trivia games for prizes from AmStar.

JQ’s One Man Swing Band is back in Owl’s Cove Park at 2 p.m., and will move up to Blue Phrog Gallery for their open house at 3 p.m.

While he plays crooning classics for the adults, kids can make their way to The Art Studio just around the corner on Middle Street for a creative, hands-on activity.

In Owl’s Cove at 3 p.m., DRUM the Program will host a family drum circle, in which kids of all ages can learn rhythms and techniques of creating West African drumming music, also sponsored by UM.

On the route between 3-4 p.m., Dala Tribal Dance will “surprise and delight” attendees with pop-up dance performances.

Electronica music artist Trees on the Moon will perform in Owl’s Cove at 4 p.m., followed by another hands-on music making workshop this time led by Montevallo musician and educator Calliope Pettis.

In addition, attendees can also enjoy After Party in Owl’s Cove Park with Michael Carpenter Trio playing Hill Country blues and Calliope Pettis with her own playful compositions, plus a special surprise.

The after party is sponsored by Montevallo Main Street, and snacks from a barbecue food truck will be available.

“At the same time, there is the Ghost Walk on UM’s campus, and tours last about a half-hour, so you can totally do both,” Gill said. “I am really excited for the expanded music and performance features this year, and so thankful to our sponsors and artists for making them possible.”

Montevallo Artwalk started in 2011 as an initiative to provide a link between the independent artists and makers in the area, and permanent brick-and-mortar businesses on Main Street.

Gill said Artwalk was a precursor to the planning, participation and projects of the Montevallo Main Street program in that its aim was to provide an occasion for local citizens and guests to rediscover and enjoy the historic Main Street area.

“ArtSTALK, named to highlight the Halloween timing, is the annual big event presented by Artwalk, with significant support and work from the city (especially Public Works and Police), University of Montevallo and our community volunteers,” Gill said. “We have such a wonderful diversity of visual artists signed up to exhibit along the route. We have over 100 painters, sculptors, fiber artists, authors, photographers and some things that defy categorization. I am also so thankful to the permanent Main Street businesses that are hosting artists this year. Don’t forget to go inside.”

“As a professor at UM, I do hear from students who create and make, but maybe don’t have enough to fill a whole tent,” Gill said. “We’re exploring ways to give them opportunities to exhibit and market without the logistical and financial investments of a full booth. We would also like to partner with other community arts groups to offer business workshops to independent makers and artists so they can grow into profitable ventures.”

For more information about Montevallo Artwalk, visit Montevalloartwalk.com or @MontevalloArtwalk on Facebook.

Specific sponsorship or volunteer inquiries can be sent to montevalloartwalk@gmail.com.