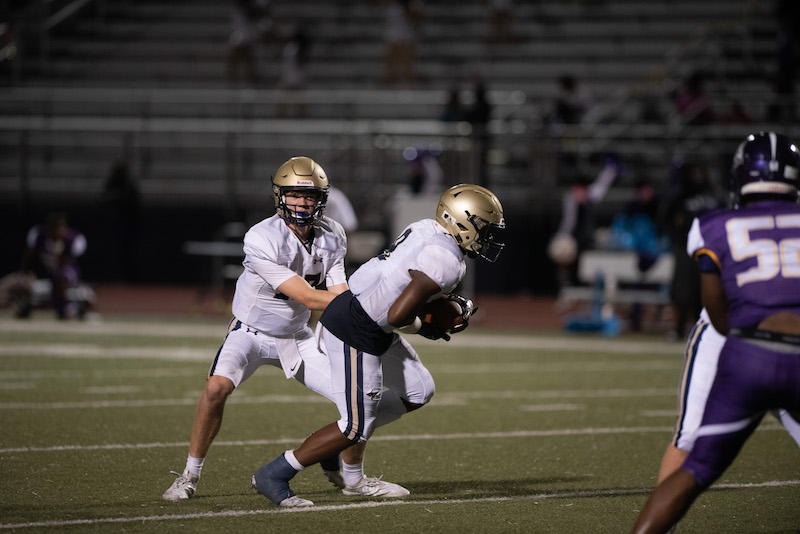 The Briarwood Lions will take on Ramsay this Friday in a game that will likely determine the region champion. (Reporter photo/Keith McCoy)

With just two weeks of region play left, week eight of the high school football season looks to be one of the most exciting of the season.

Thompson will battle Mountain Brook with a chance at the region championship (separate prediction story), Helena will take on Jackson-Olin looking to win its first region title in school history, Briarwood will battle Ramsay hoping to keep its region title chances alive and Chelsea will travel to Minor for a big matchup with playoff seeding on the line.

These two in-county rivals have split their last two matchups, and while they both sit at 1-4 in region play and Oak Mountain still has an outside chance at a playoff spot with a win the next two weeks, this game is more about pride than anything for the two schools separated by less than 2 miles. The Jags were close to pulling off a major upset against Hoover last week, but fell 42-35. Oak Mountain is coming off its first region win of the season by a final score of 53-32 over Tuscaloosa County. Both defenses have struggled this season with the Eagles giving up 31.3 points per game and the Jaguars 41.3 points per game. That lends its hand to an offensive battle, in which case it will come down to Oak Mountain’s option attack led by three solid runners and the arm of Spain Park quarterback Harrison Barker. Spain Park 42, Oak Mountain 35

Chelsea is coming off back-to-back losses by three points or less after its 27-26 loss to Homewood last week, but there is no time to sulk with this game having big implications for postseason seeding. A win very much keeps the Hornets alive for the second seed and home-field advantage in the first round of the playoffs, while a loss means they’ll hit the road. Minor beat that same Homewood team 28-0 and is coming off a bye week, but also lost 28-14 to Helena. The Tigers are giving up just 19 points per game, but scoring just 20 points per game, while the Hornets are scoring 29.9 and giving up 20.6. It’s a tough call, but I think the extra week of rest and preparation makes a difference for Minor. Chelsea should now be plenty motivated for this one. Chelsea 24, Minor 27

This could be a special week for Helena, who has a chance to win its first region championship in school history. And as long as they stay focused, that should happen. Jackson-Olin is 2-5 on the season scoring just 18.6 points per game and giving up 31.6. The way Helena’s offense is rolling having scored 30 or more in the last three games and the defense having given up 14 or less in three of its last four, the Huskies should claim the title at the end of the night. Helena 35, Jackson-Olin 14

Can Pelham win its third in a row? The Panthers will have a strong chance coming off a dominant 38-7 victory over Jackson-Olin last week. This week they get a 1-6 Northridge team, but it’s a team that has played some of the best teams in the state and is coming off its first win of the season over Brookwood. The way the Panthers are running the football behind Gabe Gamble and with quarterback Xavier Lankford gaining some confidence, I’ll lean toward them to pick up a big victory against a solid defensive team that’s only scoring 11.7 points per game. Pelham 21, Northridge 20

Calera has now lost six games in a row to fall to 1-6 on the season, but this week presents another opportunity. The Eagles will take on a Benjamin Russell team that has lost five of its last seven games. The Wildcats are struggling offensively at 20 points per game, but it’s a defense that is giving up just 21 points per game as part of a tough schedule. Calera, however, has given up 40 or more in its last four games, while the Eagles have yet to score more than 27 points this season and have been held to 21 or less in five of their seven games. Calera 21, Benjamin Russell 35

With the region title on the line, Briarwood will host No. 2 Ramsay this Friday night in a matchup of two physical teams. The Rams enter having won six in a row, while the Lions have won five in a row. The defense is playing good football as usual for Briarwood, while Luke Prewett is dominating running the football. This week, however, they’re going up against an equally as good defense giving up just 14.1 points per game that will be ready for Prewett and freshman quarterback Christopher Vizzina. The Rams have given up 12 or less in their last three in a row and are scoring 34.4 points per game this season. For Briarwood to win, the defense not only has to keep the Lions in it, but the offense will have to become two-dimensional in a hurry because Ramsay won’t let them just run the ball all night. Briarwood 13, Ramsay 21

Shelby County is still winless on the season at 0-6, while Central-Tuscaloosa enters this game having lost five in a row with a 2-6 record. The Wildcats do have the benefit of a bye week coming into this game, but the defense has given up 40 or more in their last six games. Central is slightly better on that side of the ball, which should make the difference. Shelby County 27, Central-Tuscaloosa 42

Montevallo is coming off a 14-12 loss to Sumter Central last week and is dealing with an injury to quarterback Malik Inabinette, who is important not just because of his talent, but because it keeps star receiver J.J. Evans from moving to quarterback. This week is big because second place in the region is still the Bulldogs’ if they win the next two weeks. Sipsey Valley has lost three in a row and is giving up 31.3 points per game. The positive for Montevallo last week was the defense. If the offense can get back to normal this week, the Bulldogs should come out on top. Montevallo 28, Sipsey Valley 21

The Yellow Jackets have won back-to-back region games, but their reward for that is a matchup with top-five team Reeltown. The Rebels are 8-0 this season scoring 35.4 points per game and giving up just 10.4. Tae McGregor has been special for the Vincent offense the last two weeks, but this week’s test is the toughest of the season. Vincent 8, Reeltown 35

The Chargers are actually coming off their first win of the season after beating Southern Prep Academy 28-20 in a game scheduled earlier in the week. Now they take on Southern Academy, who is 5-1 and has scored a combined 124 points the last two weeks. Cornerstone 20, Southern 40

Now 6-2 overall this season with a combined 184 points the last three weeks, Evangel jumps back into AISA action this Friday with a matchup against Morgan Academy. Morgan is 3-5 on the season and scoring just 22.6 points per game, while giving up 29. The Lightning offense is clicking right now and should be able to claim its third 11-man win of the season. Evangel 27, Morgan 20