Thompson, Mountain Brook set for Game of the Week 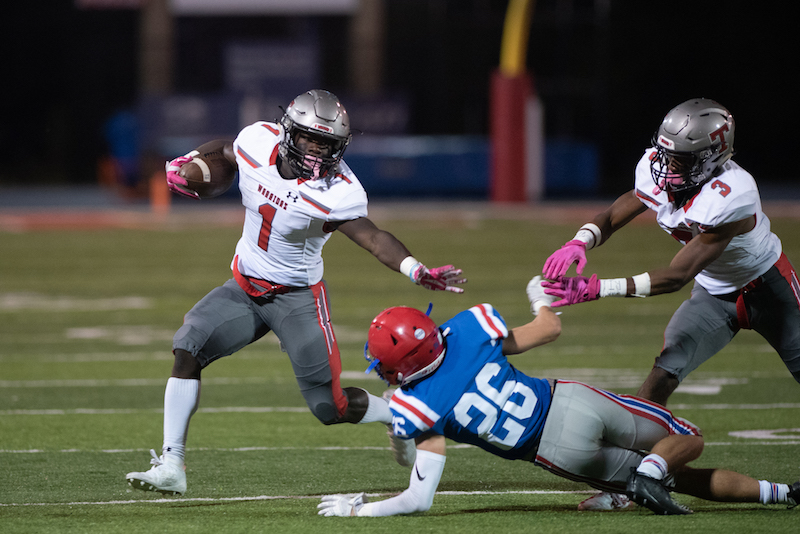 The Thompson Warriors will look to win their second region title in the last three years when they square off against No. 5 Mountain Brook this Friday. (Reporter photo/Keith McCoy)

ALABASTER – For the second time in the last three years, the No. 1 ranked Thompson Warriors will have a chance to win a region championship when they play host to No. 5 Mountain Brook this Friday, Oct. 18.

But it won’t be an easy accomplishment, as the Spartans enter the game with an undefeated record of 7-0 (5-0) to match the Warriors’ record through seven games.

If Thompson wins, the worst the Warriors can finish is 6-1 in region play and they would hold the tiebreaker over both Hoover and Mountain Brook, while everybody else would have at least two losses in the region.

If Mountain Brook wins, the Spartans will create chaos. The Spartans would take the lead in the region, but with a matchup against Hoover the week after, a three-way tie would ensue with a loss to the Bucs.

Last year, the two teams were in a similar situation as Mountain Brook entered the game undefeated, while Thompson came in with one loss. But the Warriors ended up dominating that game 31-7.

Could that happen again?

For the second time in the last three years, the Thompson Warriors are undefeated through their first seven games. The last time they got to this point perfect, they finished the regular season at 10-0.

And like last time, a big reason for that is the dominance offensively and a steady defense.

Thompson will enter this game fresh off a 35-21 victory over Vestavia Hills, who Mountain Brook narrowly edged out 14-7.

While that marked the Warriors’ first game of not scoring 40 or more points this season, they still put up 35 points against a defense that hadn’t given up more than 16 points to anybody this season and had held three opponents to seven points or less.

Thompson has now won every game this season by at least 14 points and has an average margin of victory of 27.5 points.

The Spartans will enter this matchup 7-0 for the second consecutive season and have done so for the most part on the defensive side of the ball giving up just 16.1 points per game.

Even that number of 16.1 is skewed with the 49 they gave up to Spain Park in a game that became back-and-forth. Outside of that matchup, the Spartans have given up 21 or less to every other opponent and have held four teams to 10 or less and five to 14 or less.

Paired with that defense, the offense has done what it has needed to thus far averaging 30.4 points per game.

Mountain Brook was held to 14 against Vestavia Hills in a win earlier this season and will enter this matchup off an 11-10 victory over Hewitt-Trussville.

In that victory over the Huskies last week, the Spartans trailed in the final 20 seconds, but scored a touchdown to make it a 10-9 game. They then decided to go for the 2-point attempt and converted on a wild heave from the quarterback following a fumble on a botched flea-flicker to win 11-10.

What to expect from Mountain Brook

Mountain Brook is a defensive football and that has shown the last three weeks in a row by holding Vestavia Hills, Oak Mountain and Hewitt-Trussville to 7, 14 and 10 points, respectively.

Now none of those teams are as talented offensively as Thompson, but it shows they will be physical and ready for a battle on that side of the ball.

If the Spartans want to win this game, they will have to win the battle in the trenches against a Thompson front that has proven to be tough on both sides despite several young players.

Mountain Brook will also have to find some consistency on offense. It’s unlikely they’ll keep the Warriors from scoring near 30 points in this game, which means the Spartans will have to sustain an offensive rhythm.

But two of the last three weeks, Mountain Brook has been held to 14 and 11 points in two wins by seven points or less.

With this being their toughest defensive test since being forced to shut down Spain Park and Harrison Barker, the Spartans will have to be prepared to score points like they did in that back-and-forth victory.

That means quarterback Strother Gibbs and running back Sam Higgins will have to be special. Gibbs has not only been extremely efficient throwing the football this year, but he’s also a very capable runner with several games of 100-plus yards on the ground.

If the offensive line plays well, and Gibbs and Higgins both can take advantage, the Spartans will be able to keep pace in this game.

What to expect from Thompson

Thompson’s main goal in this game has to be to do exactly what Spain Park did offensively against the Spartans.

Thompson brings one of the best offenses in the state into this matchup, and frankly, it’s unlike anything Mountain Brook has seen this year. The Spartans will rely on what they saw last year against a dynamic offense, but somehow, this year’s seems better.

Last week, against a Vestavia Hills defense that had dominated everybody this year, the Warriors saw quarterback Sawyer Pate throw for more than 300 yards and four touchdowns, while receiver Mike Pettway posted 181 yards and running back Jojo Gaiters posted 144 yards in replacement of starter Jarrett Crockett.

It’s been an offense that has been remarkable to watch and only seems to be getting better each week.

Mountain Brook’s toughest offensive test to this point has been Spain Park, and the Jaguars put up 49 points, so it’s hard to see the Warriors not dominating that side of the ball again.

What makes them so dynamic offensively is the depth. With four receivers that can beat you, three running backs and a quarterback that is extremely efficient and doesn’t turn the ball over, it’s difficult to keep them out of the scoring column.

What makes the Warriors even more dangerous? Their defense.

The last two weeks they have given up 23 and 21 points to Spain park and Vestavia Hills, respectively, but they’re still giving up just 19 points per game and have held four of seven opponents to 18 or less.

The Spartans are going to want to run the football with Gibbs and Higgins, which makes the front seven particularly important for Thompson’s defense this week.

While everybody knows Jeremiah Alexander at the outside linebacker position will be key, Jax Van Zandt and Owen May are two linebackers that will be important as well, while Damion Ugbo and Montaj Cook have been dominant on the line.

The key difference in the game

Thompson proved last week it could still score a bunch of points against an extremely good defense. The depth on that side of the problem creates a matchup problem for every team they face.

With Pettway, Tre Roberson, J.B. Mitchell and Sam Reynolds all capable of 100-yard receiving games; Jarrett Crockett, Gaiters and even Brandon Franklin all capable of nearing 100 yards rushing; and Pate being one of the more efficient passers in the state nearing four touchdowns seemingly every game, this offense is too dangerous from one sideline to the other.

Pair that with a defense that has grown up in a hurry, and you have a team that looks to be too difficult to stop right now.

The Mountain Brook defense always makes them dangerous, and if they’re able to get a ground game going to control the pace of play, this one could be close for a while, but Thompson should be able to pull away late on its home field.