Vincent’s JROTC participates in the Legacy of Heroes ceremony 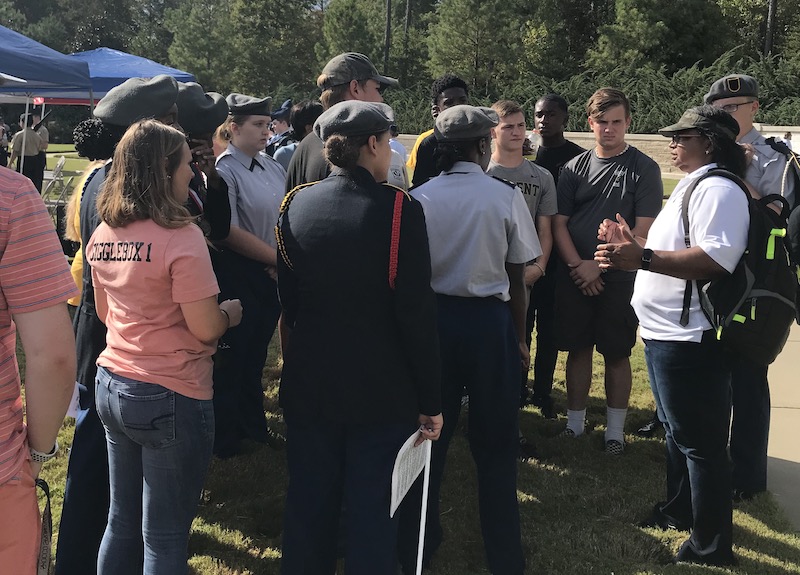 Vincent Middle High School JROTC cadets participated in a Legacy of Heroes ceremony at the Alabama National Cemetery in Montevallo on Oct. 6. (Contributed)

“When we get back to school, you all are going to talk to other members of our team about what happened here today. You are going to share your experiences. What you did today was important,” said instructor Sgt. Maj. Mary Kyser.

Those were the words spoken to a group of Vincent Middle High School’s JROTC cadets as they wrapped up a day at the Alabama National Cemetery in Montevallo on Sunday, Oct. 6.

With 2019 marking significant anniversaries of WWI, WWII, the Korean War and the Vietnam War, a combined observance was hosted by the Support Committee for the Alabama National Cemetery. These volunteers are dedicated to preserving the memory of the men and women who answered our country’s call to service.

This special program honoring all U.S. veterans of war from WWI forward was well attended by veterans of war, their family members, friends and those who just love showing their patriotism.  As encouraged by the organizers, many family members brought photos of their deceased love ones to share as part of the ceremony.

In her opening remarks, Pam Nichols, support committee chairwoman, acknowledged the many volunteers that made the day possible including Rob Robinson who provided patriotic music and the Patriot Flyers (David Harcourt and Jorge Bernard) who provided a flyover to kick off the program.

The Maxwell Air Force Base Honor Guard provided a rifle salute, and Gene Ramsay, Bugles Across America – Alabama, performed Taps to close out the ceremony.

The real heart of the program was carried out by the JROTC students at Vincent Middle High School (Army), Calera High School (Navy) and Thompson High School (Air Force). From a combined Color Guard presentation to “Remembering Heroes” of each war through readings; cadets from all schools worked together.

Escorts for the Laying of the Wreaths were; Cadet 2LT Chole Layton and Cadet LTC Jalyn Smoot.

Standing eye-to-eye with humans who had been at war, tortured and survived, and escorting family members to the wreath in honor of a family member was impressionistic on these young cadets. It was visibly moving, as occasionally students could be observed deep in thought.

It was a long day for the students, some endured the heat in uniform while others helped set up and tear down, some handed out water to audience members and while others captured the day in pictures.

“Today should impact how you treat your fellow classmates,” said Kyser as she addressed the cadets. “Remember, freedom is not free. Some of you have family who are veterans; some of you have already signed up to represent our country,” she said.

Emphasizing the importance of the ceremony, Kyser told her students, “You should feel honored to be here today.”