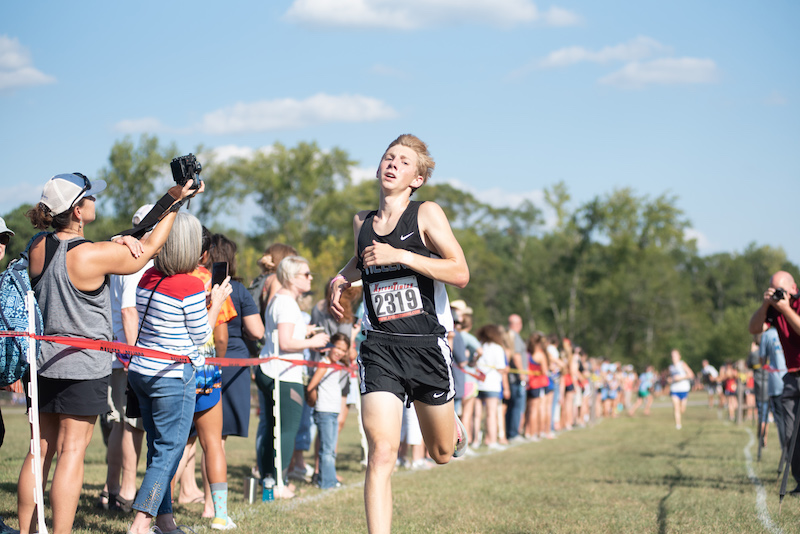 Brady Barton won the individual portion of the 2019 Helena Invitational, while the Huskies claimed the overall team win ahead of Oak Mountain and Chelsea. (Reporter photo/Keith McCoy)

HELENA – Brady Barton continued a spectacular season at his home event as the Helena Huskies’ junior cross country runner claimed his second first-place finish of the season at the Helena Invitational on Saturday, Oct. 12.

Barton beat several local runners rather handily with a time of 16:31.51 to claim the top spot. That marked Barton’s fifth time running a race in less than 17 minutes this season, while he has now finished inside the top three four times, the top five on five different occasions and the top seven in every race this season.

His strong performance as well as four other Helena runners inside the top 10 helped the Huskies win the team portion of the event behind 27 points, while Oak Mountain finished in second with 57 points and Chelsea in third with 91 points. Pelham also had a top-five team finish claiming fifth in the standings.

Aside from Barton’s win, the Huskies had another top-three finisher in Talon Pritchard, who claimed third in the event with a time of 17:28.82, which marked his second top-three finish of the season.

Finishing sixth and seventh consecutively for the Huskies were Caleb Byers and Edan Jamieson, who finished with times of 18:00.10 and 18:04.38, respectively. The final top-10 finisher for the Huskies was Gage Pritchard with a time of 18:14.83, which was good enough for 10th.

Chelsea’s Miles Bush was the highlight for the Hornets thanks to his second-place finish with a time of 17:18.06. Brush has been running well this season and now has four finishes of sixth or better.

The Hornets also got top 30 finishes from Joseph McGaha in 21st, Luke Price in 22nd, Thomas Ludwig in 24th and Andrew Fielding in 27th.

Ian Howell also had his best race of the season for the Panthers, finishing 30th with a time of 19:32.89.