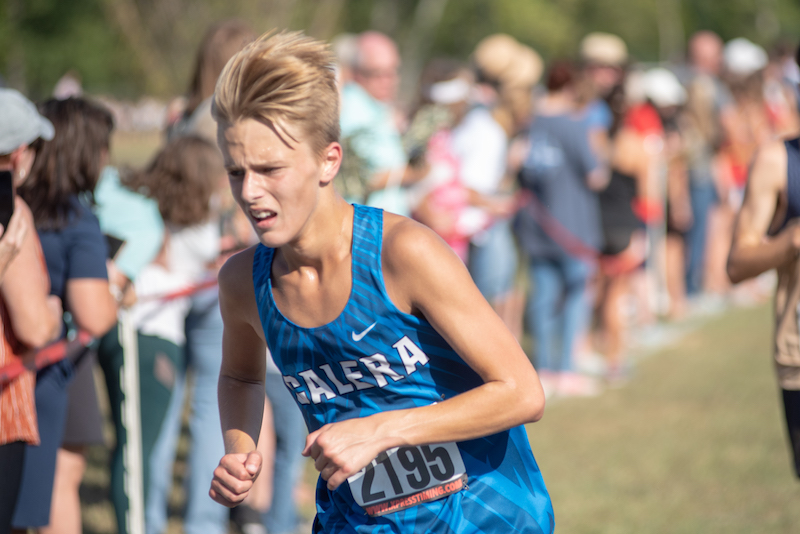 The Calera cross country team had one of its strongest performances of the season at the Montgomery Academy XC meet on Saturday, Oct. 12. (Reporter photo/Keith McCoy)

MONTGOMERY – The Calera Eagles had their strongest performance of the cross country season at the Montgomery Academy Invitational held at Huntingdon College on Saturday, Oct. 12.

The Eagles were able to claim a team finish of third in the boys’ race thanks to two top 10 finishers, three top 15 finishers, four top 20 finishers and six top 30 finishers.

With those high finishes, Calera totaled 75 points, which was 20 points behind LAMP in second place and 31 points behind Catholic-Montgomery in first.

The Eagles were led by both Cade Galloway and Riley Gay with top 10 finishes. Galloway finished the race with a time of 18:13.08 to lead the way for Calera in eighth place, while Gay took home 10th behind a time of 18:32.24.

That marked the second time in a row and second time this season both runners have finished in less than 19 minutes.

Not too far behind those two was teammate William Allen, who claimed a top-15 finish by coming in 14th with a time of 18:55.84. That time marked a new personal record for Allen and his third top-20 finish of the season.

The final top-20 finisher was Michael Jones, who finished the event in 19th with a time of 19:24.82. With that time, he beat his previous personal record by eight seconds, which was set in the previous event.

Those two times not only marked new personal records for both, but also marked the first time that each had run a race in less than 20 minutes.

The Calera girls’ team also competed in the event and finished sixth in the team standings. The Eagles were led by four top 50 finishers, including Keely Rollf in 31st, Isabella Jones in 38th, Lamiyah Campbell in 39th and Madison Denney in 46th.