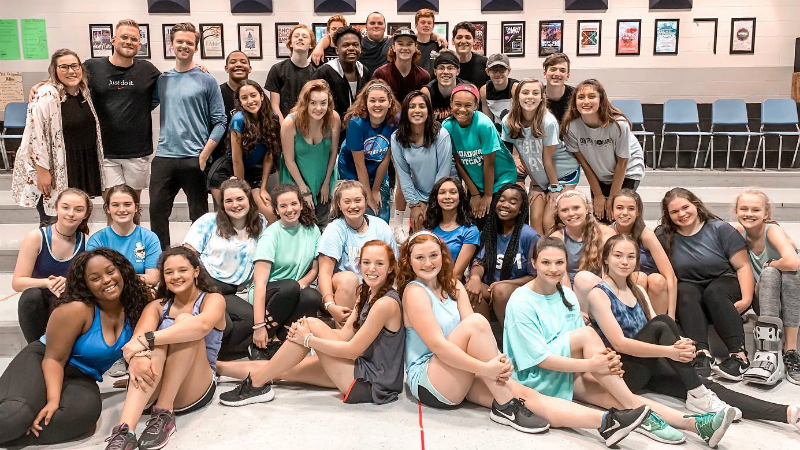 “I know a lot of people in the show choir. They come back celebrating with a lot of trophies and memories and stories to share. I look forward to being a part of that,” Wilson said.

It doesn’t hurt that the Spain Park Choral Department brings in renowned choreographer Nick Quamme at the start of each season for “Choreography Camp,” an intensive workshop engineered to prep these young performers for their upcoming season.

“I love Nick. And I just met him. He is so easy to talk to; he wants you to learn all the moves—to get everything right,” Wilson said.

Wilson and her Rhapsody in Blue colleagues were treated to Nick’s Choreography Camp a few weeks after the new school year started. The 36-hour process spreads across several days. Director of Choirs, Jim Schaeffer, coordinates “Choreography Camp” and realizes Quamme proves a huge hit with the students.

“This group has a lot of enthusiasm because they’ve worked with Nick so many times before,” Schaeffer said. “This is one of our most experienced groups with only two freshmen and only five or six members new to the group.”

Spain Park’s talent pool—and Choral Program in general—impresses Wisconsin-based Quamme. His calendar stays booked throughout the year with choreography camps coast to coast. He credits Schaeffer with the great success of Rhapsody in Blue and other Spain Park choirs.

“I think that with Mr. Schaeffer being in charge of this department, I think that’s the head of the growth of this program but I think just getting more kids interested and involved is what’s making [this program] grow,” Quamme said.  “This year is kind of a fun year, an interesting year. We haven’t had a whole of turnover since last year’s season, so we didn’t really lose a whole lot.”

Quamme references seniors like Kyle Fox and sophomores like Anna Caulk who took part in Choreography Camp to learn the tunes, moves and essence of this year’s theme: “Works of Art” (each of the seven songs in this year’s competition theme is loosely based on a famous work of art). The learning curve, by all measures, appears to lessen each year among students who both stick with the program and take Quamme’s direction.

“It’s very long but it’s also a lot of fun. You learn all of your choreography for the season,” Caulk said.

Fun, intense and energetic: a formulaic process that coalesces into the “rhapsody” so sought after by Schaeffer, Quamme, and ultimately, audiences.

“It’s always kind of a learning process when we get started learning again. I am only with them a week of the year when they learn their shows,” Quamme said. “I think show choir is a really cool thing—different than a lot of athletics because every member is on stage at all times, there is never a sitting-on-the-bench moment, there’s not picking-the-best, picking-the-favorites and featuring them. You’re only as strong as your weakest unit, so making everyone as strong as we can I think is really important.”