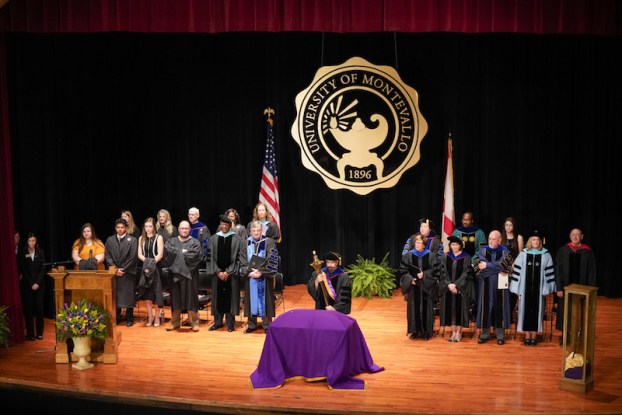 The University of Montevallo celebrated 123 years of making a difference in students’ lives during its annual Founders’ Day celebration on Thursday, Oct. 10.

The theme of the celebration was “A great institution is born of its time” and focused on how the University has evolved since its founding.

The theme was taken from the book “Alabama College, 1896-1969” written by former UM professor of history Lucille Griffith.

In the preface of the book, Griffith begins, “A great institution is born of its time. There must be a need, a demand, that brings it forth. If that institution lasts, it must change with the times; otherwise, a changing society moves on and the institution is left to wither away, unnecessary, unwanted, unsupported. Adaptation becomes the key to life and growth.”

The day featured several events, including multiple alumni gatherings, Founders’ Day Convocation in Palmer Auditorium and the investiture of the 2019-2020 senior class.

The day also celebrated the 50th anniversary of the University’s name change from Alabama College, and included a breakfast for Alabama College alumni and a portion of Convocation honoring them.

Dr. Lonnie Edwards, who graduated from UM in 1971 with a bachelor’s degree in physical education and psychology and earned a master’s degree in school administration in 1974, served as the keynote speaker during the ceremony.

He credited Montevallo with much of the success he has seen in his life.

“I want to say today that Montevallo was a great fit for me. We enroll here and we make a commitment to make a difference in our lives and the lives of those we associate with,” Edwards said. “Everywhere I go now, I’m proud to acknowledge that I attended the University of Montevallo. As I think about my decision to come to Montevallo, I’m proud of each degree that I’ve earned here. Montevallo chose me, and I chose Montevallo. It was a perfect fit, and that has made all the difference in my life.”

Founders’ Day and the days surrounding it served to continue a few time-honored Montevallo traditions.

During the convocation, the University’s senior class was officially invested into the Community of Scholars when they donned their robes for the first time.

A few days before Founders’ Day, students also carried on another storied UM tradition when they participated in the Hiding of the Crook.

Through the tradition, the Founders’ Day Committee hides the Crook, a large wooden walking stick carved with the names of students who have found it in past years, somewhere on campus.

Students then follow clues as they vie to become the first to locate it.

The Crook currently is on its third iteration; the original Crook from 1926 is enclosed in a glass display case in the Office of Alumni Affairs in Reynolds Hall.

Students Nicole Anderson, Katy Barnes, Olivia Eldridge, Bria Owens and Dakota Patrick became the newest names carved into the Crook, as they found it hidden at Kermit A. Johnson Field.

They were recognized during the convocation by University President Dr. John W. Stewart III and received UM prizes.

The convocation also served to honor three individuals selected by the UM National Alumni Association Board of Directors. UMNAA President Toni Leo ’80 presented the following awards during the ceremony:

On the night of Founders’ Day, Montevallo continued a popular and unique tradition when it hosted its 22nd annual Life Raft Debate in Palmer Auditorium.

The event is set to the backdrop of a fictional catastrophic disaster requiring survivors to seek refuge in a life raft as flood waters rise. As there is only room for one more person aboard the life raft, Montevallo professors take the stage to debate why their field should be represented as humanity seeks to rebuild.

After each panelist has argued their case, in-person and online audiences cast their votes for the winner who is bestowed with the coveted wooden oar and gets to climb aboard the life raft.

Bloom was crowned the winner for her argument advocating family and consumer science as a discipline encompassing many important skills necessary for maintaining and building a civilization, such as foraging for and preparing food, developing conflict resolution strategies and making and repairing clothing.

“FCS is all about life,” Bloom said. “Sustainable practices, consumerism, leadership principles and recognizing diversity are woven throughout the content area.”