Area volleyball tournaments set for next Monday and Tuesday 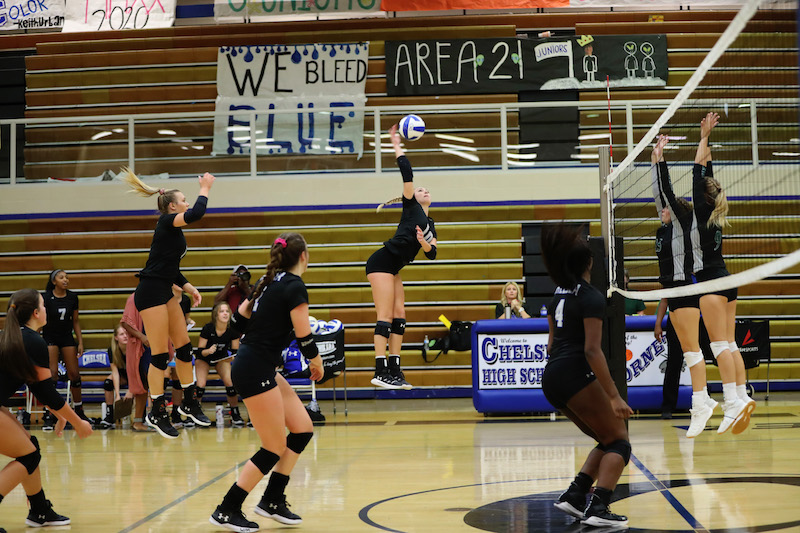 Area tournaments will kick off on Monday, Oct. 21, and will last until Tuesday, Oct. 22, as teams look to cement a spot in regionals later in the week. (For the Reporter/Cari Dean)

Area volleyball tournaments will kick off on Monday, Oct. 21, and last until Tuesday, Oct. 22, with each area concluding its tournament the same day it starts.

Below, each area tournament is broken down as is what each team needs to do to advance to regionals between Oct. 24 and 26.

Hoover vs. Tuscaloosa County at 3 p.m.

One county team is guaranteed to advance from this area thanks to Thompson and Oak Mountain squaring off against one another, and it should be a thriller. The one time these two teams met this season, the Eagles won an incredible five-set thriller. Thompson’s only losses of the season in area play were to Oak Mountain and Hoover, who is one of the state’s best teams. The Eagles lost to just Hoover in area play. These two teams are evenly matched, and it’s tough that one will have its season end ahead of the regional tournament. The winner advances to the area tournament championship and will likely take on Hoover to determine seeding for regionals.

Mountain Brook vs. Hewitt-Trussville or John Carroll at 4 p.m.

It’s going to be well deserved if Spain Park can make it to the regional tournament this year. The Jaguars have played great at times this year, even upsetting area tournament host Mountain Brook. But they draw a matchup with Vestavia Hills in the first round, which will be a tough test in itself. Spain Park won the first matchup between the two in straight sets, but lost the most recent in a thrilling five setter. The Jaguars have been playing well lately, which should help with confidence in this one. If they can win against the Rebels, they’ll likely take on Mountain Brook in the championship.

This area always creates a fantastic area tournament with the regular season meaning nothing. Chelsea and Pelham are the favorites to win their openers and advance to the championship game, as well as regionals, but anything can happen between these four teams. Winning the area tournament is also key, because the path will be much easier at regionals for whatever team comes out on top.

Briarwood vs. Woodlawn/Ramsay in the championship at 5:30 p.m.

Briarwood is one of two teams in the county to compete in a three-team area, which means the Lions not only locked up hosting rights and a berth in the area tournament championship thanks to winning the regular-season title, but they also have already advanced to regionals on Thursday. BCS will take on the winner of Woodlawn and Ramsay in the area title game at 5:30 p.m. having dropped just one combined set to those two opponents during the regular season.

Jemison vs. Chilton County at 2 p.m.

Shelby County’s season will come down to a matchup with Marbury. The Wildcats swept the Bulldogs in the first meeting between the two this year, but then had to squeak out a thrilling 3-2 win the second time around. If they can win a third in a row, the Wildcats will advance to the championship game at 5 p.m. and to regionals a few days later.

Montevallo vs. Indian Springs at 6 p.m.

It was a strong season for the Montevallo Bulldogs, but now it comes down to one match for both them and Indian Springs. Montevallo won both regular season matchups via sweep. The winner will not only advance to regionals, but also the area tournament championship.

Altamont vs. Tarrant at 4 p.m.

The Yellow Jackets will have to take on a Sumiton Christian team they lost to 3-1 and 3-0 this year to keep their season alive. With a win, Vincent would take on either Altamont or Tarrant in the championship.

Westminster vs. Cornerstone/Jefferson Christian in the championship at 6:30 p.m. (Samford’s Seibert Gym)

Thanks to winning the regular season area championship in a three-team area, Westminster at Oak Mountain has already locked up a spot in the regional round of the postseason. The Knights are automatically in the Class 1A, Area 8 Championship and will take on either Cornerstone or Jefferson Christian for the title.