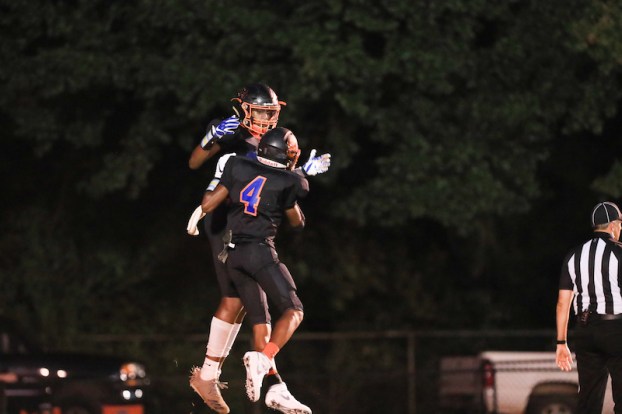 The Montevallo Bulldogs won big over Sipsey Valley on Friday, Oct. 18, thanks to a strong offensive performance and a defensive shutout. (File)

Montevallo improved to 5-3 overall and will clinch a first-round playoff home game if they can earn an area victory at Greensboro next week.

It was also the final regular season home game for several Montevallo seniors, and several showed out.

Inabinette managed three touchdown passes in the opening quarter, two to senior wide receiver Jamarius Carter and a third to fellow senior J.J. Evans. Gilliland had an 18-yard scoring run in the quarter as the Bulldogs raced out to a 24-0 lead.

“When we are focused, we can be a pretty good football team,” head coach Brandon Wilcox said. “We showed up tonight with a playoff mentality. We control our own destiny. If we can win tonight and win again next week then it gives us an opportunity to be at the house for round one of the playoffs which is one of our goals.”

The Bulldog defense had a three-and-out in their first series and forced three turnovers that turned in to quick scoring opportunities for the offense. Freshman Jaylon Hudson recovered a fumble while senior Jemari Harris and junior Justin Tyus each recorded an interception.

Inabinette connected with Carter with 4:27 remaining in the second quarter to continue the impressive opening half. Two minutes later Gilliland had a 49-yard touchdown run to make it a 36-0 score to close out scoring in the first half.

Gilliland had his third touchdown in the third quarter, from 13 yards out. A successful 2-point pass increased the lead to 44-0.

Sophomore running back Joseph Anderson collected a 4-yard touchdown run in the opening minute of the fourth quarter, while freshman defensive back and backup quarterback Kam’Ron Goins posted a 35-yard scoring run with three minutes remaining to close out the scoring.

Montevallo had a dominant night in all facets offensively as Inabinette finished the game 15-of-27 for 273 yards and four touchdowns. Gilliland posted 132 rushing yards on 14 carries with three touchdowns, while Anderson added 15 carries for 85 yards and a touchdown.

Montevallo will now close out region play at Greensboro on Friday, Oct. 25. A win in that game will lock up the two-seed in the region and home field advantage in the first round of the playoffs.