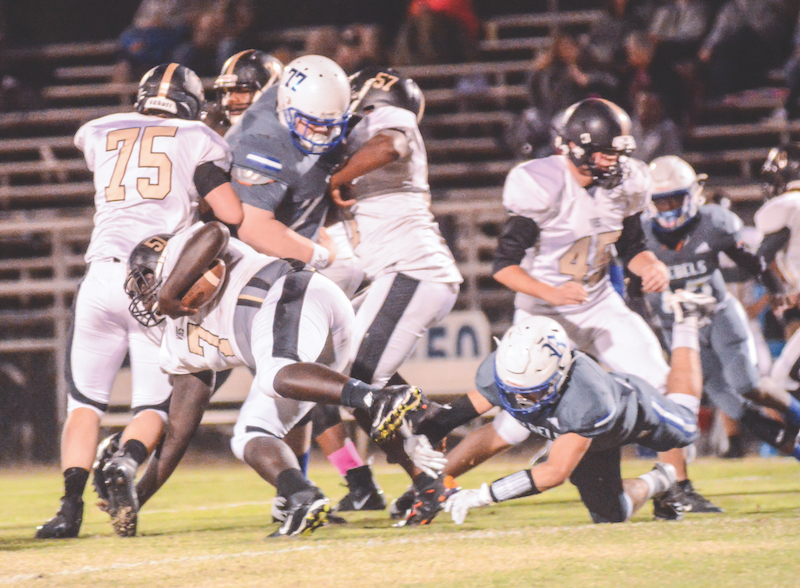 Reeltown’s defense tackles Vincent’s JT Youngblood (7) to the ground. (For the Reporter/Ryne Gallacher)

By RYNE GALLACHER | Special to the Reporter

REELTOWN – For a team that talks about not getting complacent, they certainly didn’t let that happen Friday night as the Reeltown Rebels beat the Vincent Yellow Jackets, 42-6, in a dominant defensive showing to complete their undefeated run in Class 2A Region 4.

“We got complacent in the Thorsby game a couple weeks back and since then our message as coaches has been urgency,” Rebel coach Matt Johnson said. “We are approaching each situation like we are down with one second left in the game.”

Brown’s celebration was short-lived as the first Rebel play on offense was a fumble by Brown, giving Vincent (2-6, 2-2) the ball right back.

The Yellow Jacket offense tried to establish the run all night but couldn’t find success, often putting their junior quarterback in third-and-long situations. A sack by Nelson Whaley killed a Vincent drive that never got going.

“We like to establish the run inside to open up the run outside, but we were never able to do that (Friday night) and I give Reeltown a lot of credit,” Vincent coach Lucas Weatherford said. “Reeltown was just better than us up front plus we made too many mistakes along the front.”

Both coaches gave praise to the Rebel defensive line after the game.

“Those guys free up our linebackers to give them freedom on the back end,” Johnson said. “The best part is we are finding more and more depth, not only on that defensive line but at all our positions on defense.”

The Rebel offense was back on the field after the sack, but again not for very long as Cameron Faison took the first carry of the drive 79 yards to the house for a touchdown for the first score by either team.

Vincent continued to stay patient with the run going on a decently long drive before penalties pushed them back forcing the Yellow Jackets to punt to Faison, who took the punt 40 yards to set up his offense in fantastic field position on the Vincent side of the field.

Five plays later Iverson Hooks stood in the pocket and threw a jump ball in the end zone for Eric Shaw who went up and snagged the ball while triple covered in what was the best play of the night.

In a year with not much going wrong for the Rebels, special teams has been their only blemish. After going up 14-0 on Vincent, the Rebels let Vincent’s Tae McGregor return the kickoff 85 yards for a touchdown, cutting the Rebels’ lead to 14-6.

The Rebels fumbled two punts and missed a field goal uncharacteristically on three straight possessions before they settled down with an 80-yard touchdown run by Hooks.

The Vincent offense kept feeding running back JT Youngblood with little success, giving the ball back to Reeltown with 1:15 left before the half.

With a minute left, Hooks worked his magic by finding Faison on a 37-yard pass that was downed at the 1-yard line before Tre Hughley punched in the score to go up 28-6 at the half.

The second half started off fast as Faison took another carry to the house, this time 58 yards. Faison finished the night with five carries for 139 and two scores.

Overall the Reeltown defense shut out the Vincent offense. Defenses on both sides stepped up in the second half, as another team didn’t score until Reeltown’s Scooter Brooks took a carry 35 yards for a touchdown with a minute left to give Reeltown the victory.