Briarwood takes down No. 2 Ramsay with last-second blocked field goal 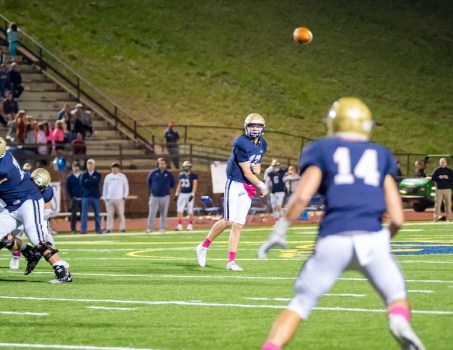 Briarwood won a thrilling 21-20 game over No. 2 Ramsay on Friday, Oct. 18, behind a blocked kick as time expired in the game. (For the Reporter/Larry Dancy) 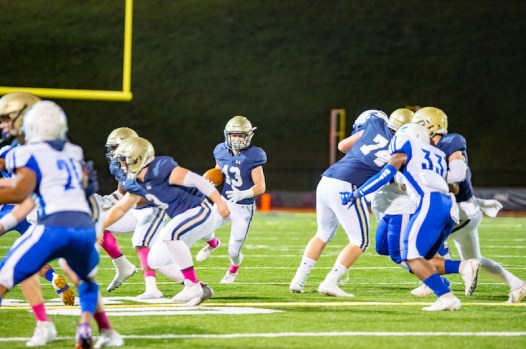 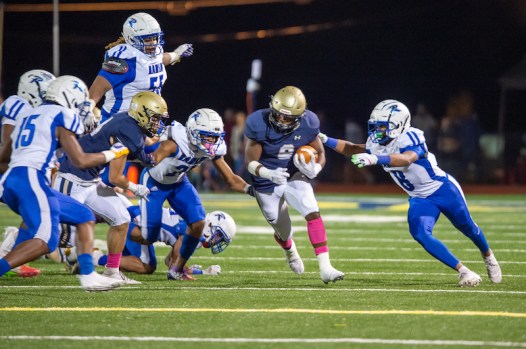 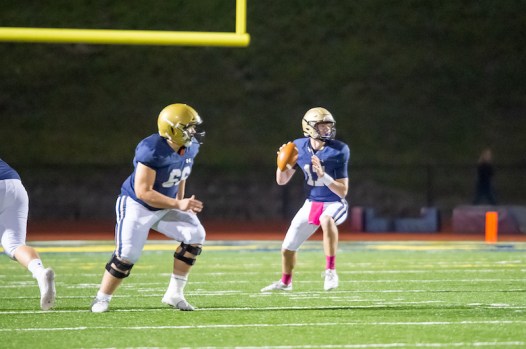 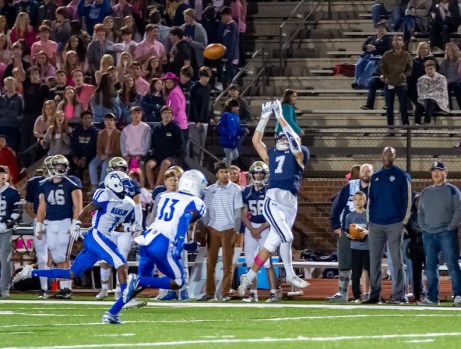 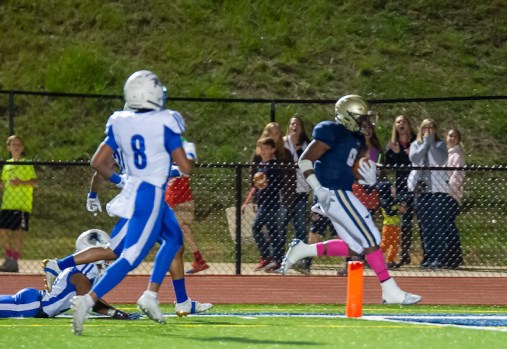 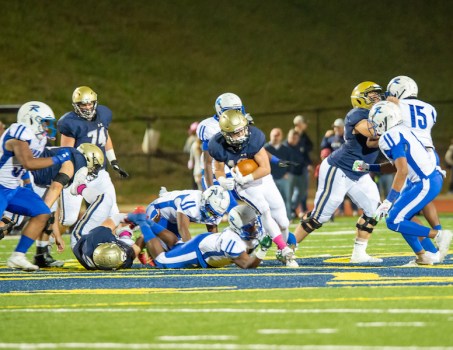 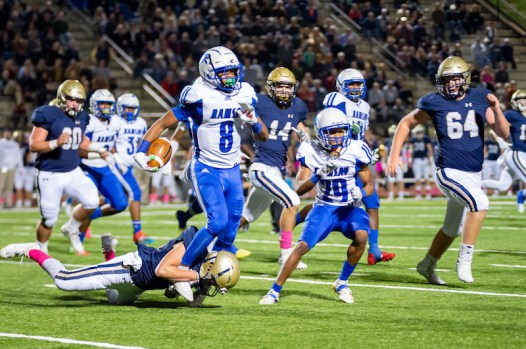 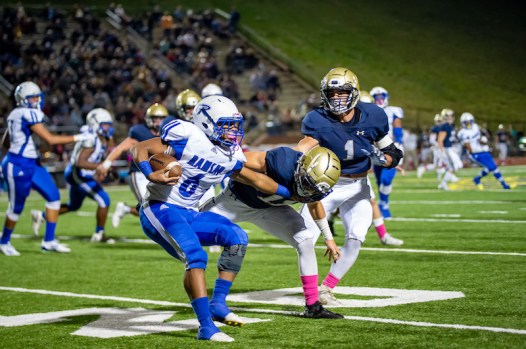 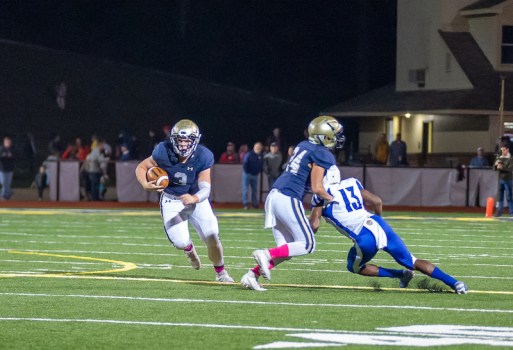 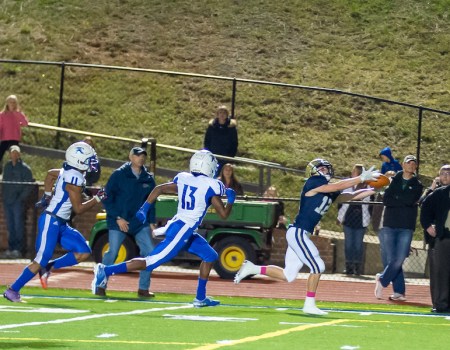 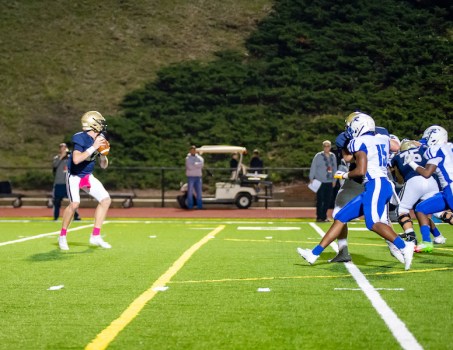 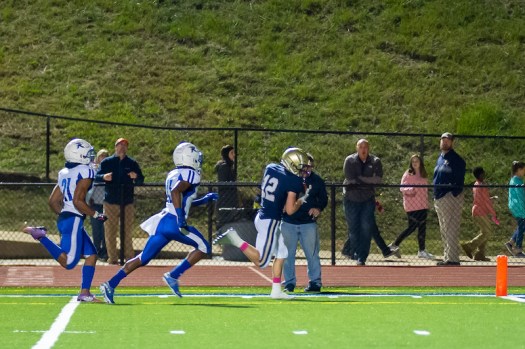 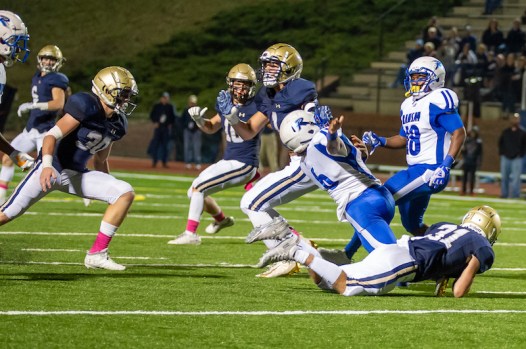 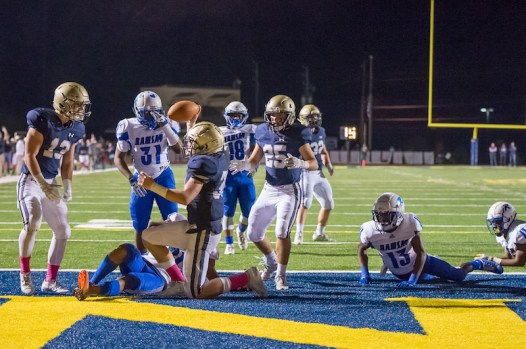 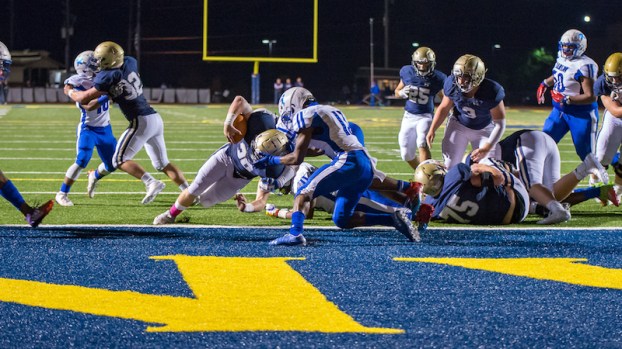 Briarwood trailed 20-7 at the half, but the Lions were able to get a strong second-half performance from freshman quarterback Christopher Vizzina to help spark the comeback attempt.

With Prewett out, he was forced into a much bigger role in the second half and it led to a couple of big passes. It started with a big fourth-down pass to Nicholas Dicen at the end of the third quarter, which led to a short Tyler Waugh touchdown shortly after.

Then, Vizzina was able to find the magical play of the game when he hit Eli Steadman for a 40-yard touchdown pass with 4:42 to play in the game to put the Lions in front for the first time in the game.

While Ramsay drove right down the field and had a great chance at a game-winning field goal from close to 20 yards out, it was the Lions’ special teams that has stepped up so many times this year that made the difference again.

Busting through the line at the perfect angle, several Briarwood defenders were able to get in the backfield, but it was Parker Hutson who got his body there to block the field goal and preserve the win to upset the No. 2 Rams.

“It was exciting the fact that we were able to hold them there,” head coach Matthew Forester said after the win. “We had to keep them out of end zone. The guys did that. Then it came down to the kick and we harp on blocking extra points and blocking field goals. We always talk about the angle we need to take and they were able to execute perfectly. Parker Hutson got a great angle and laid his body out there to help his team.”

With the win, Briarwood not only upset one of the state’s best teams, but the Lions also stay alive for a region championship needing just one more win on Thursday, Oct. 24, over Fairfield to complete that task.

“It’s a blessing. It’s amazing the program (former) coach (Fred) Yancey built and how we’re able to continue working hard on the foundation,” Forester said. “Ramsay is one of the premiere teams in the state just three years removed from 6A state championship. We knew it was going to be a battle and I’m proud of how we stepped up.”

Early on, it was the Rams that were winning the battle.

They were able to use a long opening drive of close to six minutes to strike first for a 6-0 lead.

Briarwood, however, had a big answer from Prewett. The senior running back flashed his speed and agility on senior night with a 31-yard touchdown run to give the Lions their first lead of the game at 7-6 in the final seconds of the opening quarter just one play after Vizzina completed a big third down play to Blake McKenna.

But on the ensuing kickoff, Ramsay responded with what looked like it would be the biggest special teams play of the night when the kickoff was returned nearly the length of the field. After a successful 2-point conversion, the Ramsay had jumped back in front, 14-7, with 11:45 to go in the half.

After Briarwood recovered a fumble and Ramsay responded with an interception, the Rams were able to make it 13-unanswered points on a 20-yard touchdown pass with 4:24 left in the second quarter. After the missed extra point, the Lions trailed 20-7.

Just before the half, Prewett took a big hit, and despite walking off under his own power, the game-changing playmaker never did return to the field in the second half.

But coming out in the second half, Briarwood didn’t panic.

It took a while, but Vizzina eventually got going with his pass to Dicen at the end of the third quarter, which led to Waugh’s touchdown.

Down 20-14 heading to the fourth quarter, the Lions relied on their talented defense again and got a big interception from Cal Higdon with just less than eight minutes to play.

Briarwood capitalized with a powerful drive that was capped off by the big 40-yard touchdown pass from Vizzina to Steadman, as the freshman quarterback had stepped up to give Briarwood a 21-20 lead with 4:42 to play.

“Playing one of the top defenses in the state with SEC caliber players on the defensive line, we called a hitch and go there,” Forester said. “He knew he was about to get hit, but he stepped up and took the hit, and it ended in a 40-yard touchdown that put us in front. He had resolve in himself to make a big play and that’s what he did.”

Forester was also proud of how his senior tailback stepped up as a leader to keep the team going despite not being able to play.

“It was pretty impressive that despite losing a guy that had generated big portion of our offense the last three years, even without him out there, we still won,” Forester said. “He’s always out there leading and did a great job at helping Luke Reebals step up tonight. We knew, even down one Luke, we had another ready to step in.”

Briarwood is now 7-1 on the season and has won six games in a row. They’ll hit the road on Thursday, Oct. 24, to take on Fairfield for a chance at the Class 5A, Region 4 championship.