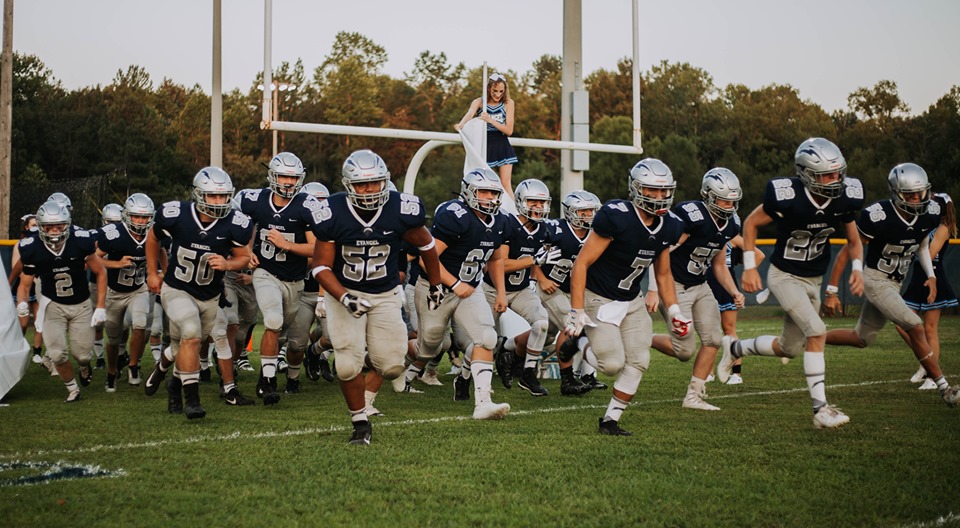 The Evangel Lightning picked up a homecoming win over 11-man opponent Morgan Academy on Friday, Oct. 18, to close out the regular season. (Contributed)

“I think it’s a huge win for our program to beat a 3A school to the caliber of Morgan Academy and to watch our kids and how they reacted and how they focused all week and believed they could do it,” Smith said. “We really made the transition from 8-man to 11-man well.”

Senior quarterback Tyler Henderson completed 22-of-31 passes for 382 yards and five touchdowns to lead Evangel to victory. First, he connected with Jett Lodge on a 57-yard touchdown pass to take a 6-0 lead.

Morgan answered in the second quarter to take a 7-6 lead, but Evangel added a 47-yard touchdown pass to Will Ferrell from Henderson before halftime to lead 12-7. Ferrell finished the game with 125 receiving yards on 14 catches and rushed twice for 45 yards.

Evangel opened the second half with a 77-yard touchdown pass to Lodge, Henderson’s third of the game. The two-point conversion gave ECS a 20-7 cushion, which proved to be needed as Morgan quickly answered to make it 20-14.

Henderson added two more touchdown passes to Lodge in the fourth quarter from 25 and 34 yards out. Lodge finished with four catches, all touchdowns, for 193 yards. Morgan attempted a late rally, scoring twice and adding an extra point late.

“It was one of those games where you never felt like you had it put away, but I knew our kids were playing so hard,” Smith said. “The offensive line was outstanding. They played so well. Every time we passed, they were coming at us with five, six guys, and sometimes seven. They sacked us a few times, but I was proud of the offensive line. They did their jobs. We don’t win tonight without those five guys up front.”

Defensively, Jahmad Quillman led ECS with seven tackles, Timothy Howard had six and Gothard had three stops and an interception

Up next, ECS (7-2) will host the Alabama Christian School Conference (ACSC) Championship on Friday, Nov. 1 in Alabaster. Kickoff is 7 p.m.