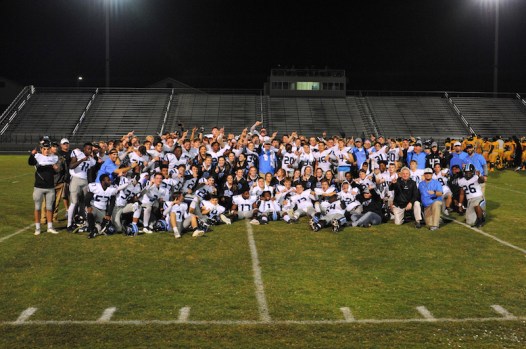 Helena celebrates winning the Class 6A Region 5 championship following a 49-21 win against Jackson-Olin on Friday, Oct. 18. It was the Huskies' first region championship in school history. (Reporter Photos/Jeremy Raines) 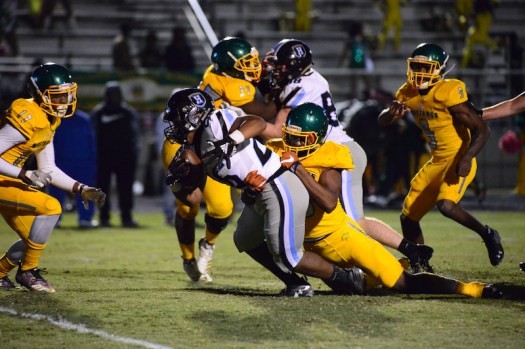 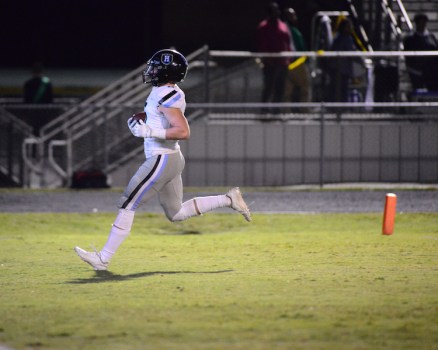 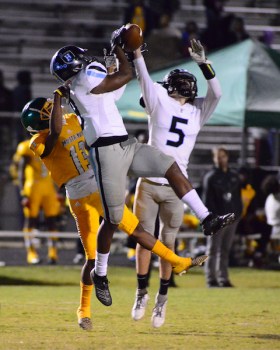 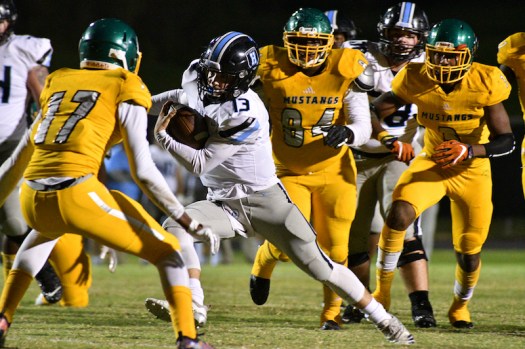 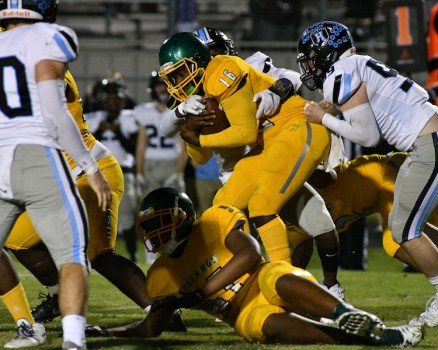 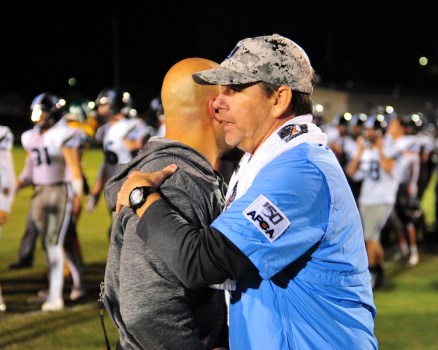 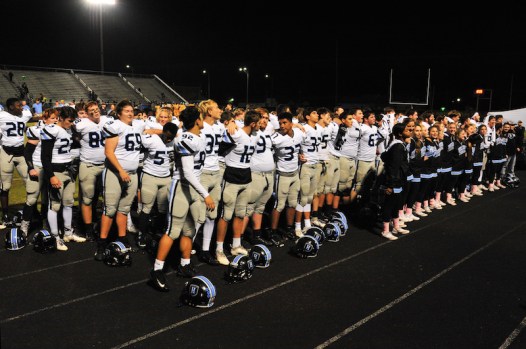 BIRMINGHAM – For the first time in school history, the Helena Huskies have won a football regional championship.

The Huskies needed a road win over Jackson-Olin to clinch the Class 6A Region 5 championship and they did it with ease, taking care of the Mustangs 49-21 on Friday, Oct. 18.

In just his second season as head coach, Richie Busby has led the Huskies to a region championship, as Helena is in just year three of competing at the 6A classification.

“It means a lot to me for these seniors who went through a lot as freshmen and sophomores and for them to be able to have this experience before they graduate is what means the most to me,” Busby said. “Then, the overall team, for these guys to buy in. We talked before the game that we’ve been here 21 months and what they’ve done in that amount of time is amazing and everything goes to these guys. They’re the ones that have worked hard.”

Helena relied heavily on what had gotten them to a 6-1 record coming into the Jackson-Olin game, and that’s a solid run game and stout defense.

The stout defense was on display on Jackson-Olin’s opening drive of the game.

Facing a fourth-and-1, the Mustangs attempted a quarterback run up the middle but Helena’s Nathan Dunaway and Zach Goodwin combined to make the stop to force an early turnover on downs.

On Helena’s first offensive possession, the Huskies turned to running back Marquis Johnson who had several good runs.

As the ball sat on the Johnson-Olin 5-yard line, Johnson was rewarded the ball as he took it in from five yards out to give the Huskies a 7-0 lead with 8:39 left in the first quarter. It was Johnson’s first of two touchdowns on the night but more impressively, he surpassed the 1,000 yard rushing mark for the second straight season.

“It’s his second year to go over 1,000 yards and that offensive line has blocked for a 1,000 yard rusher two years in a row,” Busby said. “We’re in week eight and he’s already gone over the 1,000 yard mark. That’s just what we do, it’s what we try to hang our hat on is running the football and playing good defense.”

Johnson finished the night with 116 yards rushing on 16 carries with a touchdown. He also finished with 50 yards receiving and another score.

After another defensive stand, Helena got the ball back again and made quick work of the Jackson-Olin defense with a 79-yard scoring drive.

After completing a pass to Antonio Ruiz to the Jackson-Olin 38-yard line, Helena quarterback Luke Stamba did some work with his feet.

Stamba scrambled to the right and broke several tackles and stuck the ball inside the right front pylon for a 24-yard touchdown run. This gave Helena a 14-0 lead at the end of the first quarter.

Overall, Stamba accounted for four touchdowns with three coming through the air and one on the ground. He finished the game 11-for-16 with 215 yards and three touchdowns and an interception. He had 50 yards rushing.

Stamba dropped back and floated a screen pass to Johnson who then did the rest, breaking free for a 50-yard touchdown to extend the lead to 21-0.

Halfway through the second quarter, Jackson-Olin finally stopped Helena’s offense as the Huskies came up a chain length short when going for it on fourth-and-2.

However, the turnover on downs wouldn’t hurt Helena as the Huskies’ defense came up with its own takeaway on the next series.

Helena’s Ethan Trimm stripped Jackson-Olin of the football as the Huskies recovered at the 6-yard line.

The fumble recovery led to a touchdown on the next play as Helena’s Kobe Hughes ran it in to give Helena a 28-0 advantage.

Helena’s only big miscue in the first half came near the end of the second quarter, when Stamba was intercepted on a ball he was attempting to throw away.

This led to a one yard touchdown run by Jackson-Olin a few plays later as Helena took a 28-7 lead into halftime.

Helena received the ball to open the third quarter and after driving the length of the field, Helena put the ball on the ground at the 5-yard line as Jackson-Olin recovered.

Just like the first half though, Helena’s defense came up with a key takeaway following a turnover by the offense.

This time it was Helena’s Goodwin who intercepted the Mustangs and ran it back to the 5-yard line.

On the next play, Hughes scored on a 5-yard touchdown run to make it 35-7.

Stamba and the Helena offense would put the game away for good later in the third quarter as Stamba tossed two touchdown passes.

The first was a 20-yard touchdown pass to Ruiz followed by the longest touchdown play of the night that went for 60 yards to tight end Will Griffith to make it 49-7.

“When we have to, Luke made a couple of really good throws especially in the second half,” Busby said of his play.

The Huskies will finish region play with a big rivalry game at home as Helena will look to knock off Pelham for the first time in school history on Oct. 25.

“It’s special because these guys will never forget this,” Busby said. “I told them that as long as you come back to homecoming or to the school you’ll always be the first to win a region championship. It’s something that you leave a legacy behind and that’s what you should do as a senior and I’m so happy and proud for those guys.”